Real estate prices have hit the roof largely because of a lack of regulation in a housing sector ruled by speculators. Faced with a crisis, the centre wants to facilitate private-sector housing initiatives for the urban poor, without doing anything itself. This, the alf study notes, is an unsuccessful strategy.

No purposive thinking has been devoted to housing the poor. "All building bye-laws till now were only for middle-income and high-income groups. The national building code also talked about an ideal house with a minimum of 600 sq ft (56 sq m), but a poor person cannot afford bigger than a 250-sq ft house. It is only in the National Building Code-2005 that the concept and details of housing for the economically weaker section were introduced," says hudco's V Suresh. 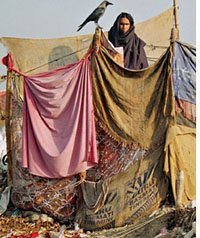 The centre has regularly come up with draft policies on slums and housing, but they have either remained on shelves or had no impact. It started making a national slum policy in 1997 that favoured improving infrastructure in slums. But the policy remains a draft (see 'Slum today, gone tomorrow' , Down To Earth, January 15, 2004).

Questioned by Down To Earth, D P S Negi, director, Ministry of Housing and Urban Poverty Alleviation said: "The policy is in advanced stages of approval and was sent to the cabinet a week ago." But even now the policy is being opposed because it is based on public-private partnerships. "The policy doesn't talk at all about land rights for the poor. And like most policies in India, even this one is in line with the World Bank policies of public-private partnerships. They intend to recover the entire cost of land from the poor, so where is the concept of social welfare?" asked Kshithij Urs, regional manager of ActionAid, Bangalore.

In 2005, the Union Ministry of Urban Employment and Poverty Alleviation also released a draft national urban housing and habitat policy (nuhhp) to create 'housing for all'. It said: "The total requirement of urban housing during the 10th Plan period (2002-2007) works out to 22.44 million dwelling units in urban areas consisting of urban housing backlog of 8.89 million dwelling units at the beginning of 10th Plan (2002) and additions of new housing of 13.55 million dwelling units." It valorizes public-private partnerships and their "fairly positive results" and promises jnnurm will tackle the urban housing crisis. Under jnnurm, slum dwellers are entitled to a minimum floor area of 25 sq m, contributing a minimum of 12 per cent of the cost. Researchers say it is anti-poor because its funds have strings attached in the form of questionable reforms (see 'Bad plan for 63 cities' , Down To Earth, August 31, 2006). Even this policy is awaiting cabinet approval.

nuhhp has other recommendations, which only sound good. For instance, it recommends earmarking land for housing economically weaker sections and lower-income groups (ligs) which "could be 20-25 per cent in any new housing colony in public/private sector". Such allocation has not happened. Take Delhi. According to the capital's 1962 master plan, the government had to provide 400,000 plots of 25 sq m to slum dwellers by 2001. Instead, land is being given to private contractors for highrise buildings and entertainment plazas. "Delhi is facing a tremendous shortage of housing. Land mafia is developing slums in unauthorized areas where there are no basic amenities," Sheila Dikshit, Delhi's chief minister, acknowledged at the Urban Age India meet.

Her government recently announced a scheme for 100,000 houses for the weaker section in Bawana on the outskirts of Delhi. Experts say it is bound to fail. "A house for Rs 1-2 lakh is a wonderful idea, but relocating people 20 km from the city is not a good solution. Slum dwellers will buy these houses, sell them and squat closer to their work places," says Menon.


Land and housing are state subjects and most states have dismal records. On November 1 last year, the Maharashtra government announced its draft state housing policy, acknowledging that the real estate boom and easy availability of finance had not translated into affordable housing for economically weaker sections and lower- and middle-income groups. The draft policy said slum areas above 40 ha would follow the Dharavi model and within three years 500,000 lig houses would be built (see 'Shelter skelter', Down To Earth, December 31, 2006). "The draft policy has been forwarded to the legislature and will come up for discussion during the winter session," says S S Kshatriya, principal secretary, housing department, Maharashtra government. 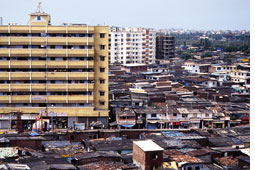 West Bengal is banking on jnnurm, under which it has been allocated about Rs 5,400 crore, of which Rs 3,018.40 crore is for slum infrastructure and housing. Most of the work is still in the planning stage. In slum areas within Kolkata municipality's jurisdiction and the greater metropolitan area, 5,068 and 49,483 low-income dwellings have been planned by relocating residents temporarily, razing structures and building four-storey tenements which will be signed over to the female adult of families at 20 per cent of cost, the rest being paid by the state and centre. Officials say the scheme recommends not moving people more than 2 km to save livelihoods. They also say there is talk of legislation ensuring all development work, whether public or private, will reserve 15 per cent land for the urban poor (see box: Big deals).


There are a multitude of views on how to deal with the present crisis. Common to them are the arguments that housing for the poor must be welfare-driven and rehabilitation schemes must provide security of tenure. Some say setting up an independent regulator for real estate would standardize norms and ensure quality. Others recommend fiscal instruments. But the Union Ministry of Urban Development is yet to react.

The bottom line, however, is that public housing is the way out. Singapore has shown the way. "Since World War II, the Singapore government's control over total land has increased from 45 per cent to 90 per cent, which it is using to develop public housing. In 1959 only 8.8 per cent population used to live in such houses, but now the share has gone up to 85 per cent," says Heng Chye Kiang, dean of the school of design and environment, National University of Singapore. "Production and supply of affordable housing can happen only through state intervention," says P K Das, a Mumbai-based architect.

Bogota, the capital of Colombia, is following another successful housing model. The government has acquired land around the city and is developing it for the urban poor. "Private developers are involved, but they cannot sell a house for over us $15,000. We have also cross-subsidized services like water, power and piped gas for the poor. The Maharashtra government should learn from us and ensure that land around Mumbai is publicly not privately owned," says Enrique Penalosa, former mayor of Bogota. The Maharashtra government is in fact going in a diametrically opposite direction.

Another model suggests giving slum dwellers land with services like toilets and water connections. "Since the slum dweller would have the land and facilities, he would want to take a loan and build his own house. And once he has invested in the house, he will not sell it easily," says Menon.

The problem can be handled creatively. "Authorities can give ground floors and first floors to different families, with the land shared by them," says Suresh. Co-operative slum housing, with land being controlled by the community, is another option. "Even if people sell their plots, they have to pay a fee to the co-operative. The land will remain in the community," says M L Khurana of the National Co-operative Housing Federation of India. Two localities in Delhi--Prayog Vihar and Ekta Vihar--have been following this model since 1987. Dikshit has announced four more co-operative projects.

When it comes to the crunch, there is no one-size-fits-all solution. But a starting point has to be the implementation of a workable national slum policy.

With inputs from Maureen Nandini Mitra and Ravleen Kaur