The Education Guarantee Scheme of the Madhya Pradesh government is a new approach to encouraging rural children to attend school. And the scheme is looking good in the early stages 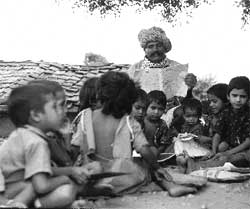 long before the 83rd Constitutional Amendment Act-1997, making primary education a fundamental right, was tabled in the Indian Parliament, the state of Madhya Pradesh had embarked on an innovative scheme called Education Guarantee Scheme ( egs ) in January 1997. This guarantees education to citizens on demand, and also aims at universalising primary education by the year 2000. Under the scheme, when a group of people in rural areas of the state demand education for their children, the government is bound to provide basic education facilities.

Inspired by the Employment Guarantee Scheme of Maharashtra, (whereby the state has to provide work to rural labourers on demand), the scheme empowers the community to enforce the obligation of the state to provide primary education. It also involves the community through resources participation. Launched under the Rajiv Gandhi Shiksha Mission ( rgsm ), 11,579 new schools have been set up, and about 350,000 children have enrolled within six months of its commencement. Most of these schools have come up in tribal villages. In district Jhabua, 1,124 schools have been set up, while 1,412 and 779 schools have come up in the neighbouring districts of Khargone and Dhar.

Under the egs , the state government guarantees an educational facility if:

l The demand for the educational facility is from a rural area;

l There are no schooling facilities (government or private primary schools both in formal or non-formal education) within a radius of one km;

l The local community raises a demand for an educational facility.

As the principles of the scheme are decentralisation and community participation, the Gram Panchayat (village council) will not only be the nodal agency to manage the school but also provide the space for the school. The school remains open for at least 200 days a year. Timing and vacation period are decided by the community according to suitability.

"The egs caters to area-specific problems of the state in the education sector," explains Amita Sharma, director, rgsm , and member secretary of the state-level egs coordination committee. "The scattered pattern of tribal villages makes it virtually impossible for government agencies to go in for a formal education system. Even if you make it, chances of success are bleak," she adds. A typical tribal village consists of several scattered hamlets that are typified by high dropout rate. So the egs is an effective alternative that is non-formal and puts the onus of education on the community. "The egs confirms that without community awareness and active participation, the access to primary education is not utilised," says Sharma.

You have to walk five km from the main road to reach Malphalia village in district Jhabua. It was one of the first villages to raise the demand of a school under the egs . The school started on May 1, the premises being provided by a villager. According to Surbha, the sarpanch (panchayat chief) of the village, all children who enrolled had earlier dropped out of a formal primary school 10 km away.

It is a pleasing sight. Exactly 19 students gather every morning in the backyard of Dhirma's home, who has provided it for the school. Ram Singh Basnia, the teacher, uses a "different" method. "In this school, we do not teach from text books. Instead, emphasis is put on methods that are 'student-friendly'. I relate numericals to local myths and folklore so that the students retain the knowledge," he says. For Bir, a student in the Malphalia school, it is a new experience. "I have learnt all the alphabets and numbers in four months. I could not manage this in my previous school in one year," he says. Bir was attending a formal primary school one year back. But he had to discontinue after two months as the school was very far and the timing interfered with the harvesting season. Abhay Singh Kharari, chief executive officer ( ceo ) of the egs , janpad panchayat, Malphalia, says: "After two years of children remaining out of school, the process of education has started again. The break was mainly due to the inaccessibility of the primary school."


In 1997, the state government conducted a statewide survey on children aged 5 to 14 years under a programme called Lok Sampark, which covered 50,000 villages in a door-to-door campaign. The results were disturbing, and indicated the futility of the existing formal and non-formal primary education facilities. In Bastar and Khargone districts, the figure was 25 per cent. It was observed that schools were inaccessible. Many social factors also contributed to the high dropout rates. For instance, children had to discontinue their studies due to large-scale migration in tribal areas during the harvest season. In most cases, this meant the end of formal education. On the other hand, for the children of landowners, the harvesting time of rabi crops proved to be the end of their education as it coincided with the start of the academic session.

Results of this survey structured the egs with two important pillars: decentralisation and community participation. It was given a area-specific character and was designed to offer a viable education package. It is sufficiently decentralised to enable the community to manage it effectively, and also responds to the needs of the community. It sets a clearly defined goal: universalisation of primary education.

The state's department of school education is the key agency, assisted by the departments of tribal welfare and panchayat. The state egs committee, an interdepartmental committee chaired by the state education secretary, has been formed to coordinate, monitor and suggest policy initiatives. At the district level, the main agency of implementation is the panchayat.

The community submits its demand on paper to the sarpanch of the gram panchayat with the required details. Under the egs , the name of the teacher is suggested by the community, who is usually from within the community. This creates more accountability. When the number of students is more than 40, another teacher is provided, who has to be a woman. The sarpanch then forwards the demand paper to the ceo of the janpad panchayat within three days of receiving it. In case the sarpanch fails to forward it within three days, the community can go directly to the janpad panchayat. The ceo , who maintains a record of all receipts of demand, issues the receipt of the demand letter the same day. This also acts as a statement of guarantee issued on behalf of the state government.

The ceo then verifies the demand and submits a report to the Block Panchayat Education Committee, the block-level body for the egs . After the demand is accepted by the committee, the teacher is appointed from the list given by the community. If it fails to take a decision within seven days, it loses the right to do so, and the ceo is entitled to act.

The scheme has in-built monitoring mechanisms. The centres are simultaneously monitored by agencies at the state, district and block levels. The school education department makes the arrangement for the academic evaluation of students based on the recommendations of the ceo . It is the duty of the gram panchayat to inform the ceo about the functioning of the centres through monthly reports. The centre is closed if the attendance falls below 20 per cent of the initial enrolment. Not even a single school has been closed due to this reason, though continuous fall in attendance has been noted in some centres, officials admit.

Harish Kosra, teacher at an egs centre in his native village Paliaphalia, says: "We need to encourage the children and parents for continuing the education. Children still fail to turn up because of lack of motivation." The school has 42 students, 30 of whom are former dropouts. The average attendance of the centre is only 20. But Sharma has a word of encouragement. "If you mark the student profile of these centres, the system in fact has rehabilitated the dropouts of our formal education system. Whatever attendance we get is at the initiative of the community, which insures continuity of attendance. Moreover, the centre will be closed if attendance is below 20 per cent of the original enrolment," she says.

Though it is too early to prepare a balance sheet of the scheme's success or failure, one can easily say that it underlines a totally new approach to the universalisation of elementary education.