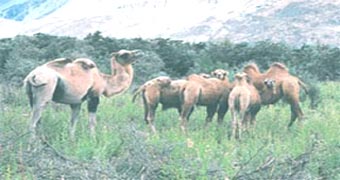 there was a time when the double-humped Yarkandi camel served as a vital means of transport on the 6,400-km historic 'silk route'. Camel caravans carried tea, silk and porcelain of China to the bazaars in the Middle East and as far as the Byzantine empire and Rome. Traders from Central Asian countries also used the camels to carry their merchandise to Ladakh and the adjoining cold desert regions via the Karakoram pass.

But following the Chinese aggression in 1962, when the Indian border with Tibet was sealed, the existence of the Yarkandi camel in South Asia was restricted to the cold desert of the Nobra Valley in Ladakh. Today, the camels are a neglected lot and their population has dwindled to around 68. The number is fast decreasing given the innumerable odds of their harsh habitat. Moreover, the construction of roads have rendered them practically useless for transportation purposes and local people show little enthusiasm in rearing them.

Besides India, double-humped camels are found throughout the highlands of central Asia from Turkistan to Mongolia and their total population is around 20 million. They were first introduced in Kashmir by Hazrat Mir Sayeed Ali Hamdani, a revered Sufi saint. When he, along with 700 companions, travelled to Kashmir for the first time in 872 ad , they used these camels to cross the cold desert from Iran via the silk route that stretched from Sian in China to Antioch in Syria. Subsequent trips in 874 ad and 876 ad were also made on these animals. Due to the absence of roads, the camels became the ideal mode of transportation. Later, tribes like the Barcha, Chonjor, Kalon, Shanku and Shaban on the Indian side of the border also bred and maintained the animals and used them extensively for carrying goods and merchandise.

"With the closure of traditional trade routes to Central Asian countries in the early 1950s, the camels remained in Ladakh. Even after closing of the Karakoram route connecting Yarkand in northwest China, these animals were used for transport across Changla via Durbook and the Changtang part of Tibet," says Farooq Ahmad Kaloo, extension officer in the publicity wing of the animal husbandry department in Kashmir. He has done extensive research on the Yarkandi camel.
The double-humped camel draws its zoological name Camelus bactrianus from the Camelidae family and the Bactria region of west Asia. This animal is a native of the Gobi desert. In fact, the single-humped Dromedarian (Camelus dromedarius) camel found in Rajasthan, Arabia and north Africa is generally believed to have evolved from the double-humped Bactrian species.

The Bactrian is quite different from its single-humped counterpart. For one, the double-humped camel has more water-retaining capacity than the Dromedarian. Besides, the Dromedarian is longer-legged than the Bactrian, has a shorter coat and is generally more lightly built.

Along with its enhanced water-storing capacity, Bactrians can also store more food than the Dromedarians in their two humps. Also, its double hump makes riding through the treacherously cold and arid desert safe and comfortable. "The animal has a body frame smaller than that of the single-humped camel. It has a very sure foothold on the sandy, uneven ground and traverses it with much ease. The animal is hardy and can survive without water for days. The humps are storehouses of energy and consist of fatty tissue. The animal utilises these fats during the times when it is unable to find food," says Kaloo.

He further points out that the animal's load carrying capacity varies between 500-600 kg as against the 60-70 kg by a pack pony. Commercially, the camel is very profitable. "Nature has gifted this wonderful animal with a very thick coat of hair and wool to help it fight the cold and harsh winter. An adult camel yields an average of 2-4 kg of fine wool and around 3 kg of coarse wool annually, which is used extensively in the manufacture of caps, sweaters and mufflers," Kaloo notes.

The average life span of the double humped camel is 25-30 years, attaining puberty at the age of two and a half years. The camel's breeding season begins in December and lasts till March. "The animal's gestation period extends for about 14 months," explains Kaloo.
However, according to Kaloo, following the Chinese aggression in 1962, the camel lost its importance. "The presence of roads undermined the utility of the camel as a mode of transport, and rearing and maintaining them became increasingly unprofitable in and around Leh. Eventually, the animals were shifted to Nobra Valley, which is rich in foliage. In all, about 60 camels were shifted to Nobra from Leh by 1965," he says.

In the successive years, the animals suffered total neglect and their population fell over time. By 1986, the number of double-humped camel had dwindled to 45.

"Most of these animals were abandoned by their owners and left in the open to graze on the banks of the Siachen and Shayok rivers. Eventually, these animals developed a taste for leaves of Hypophia , a thorny plant, causing damage to the plants and also endangering their own lives. Worse still, many of them were maimed by local people who considered the animals dangerous to the fragile ecology of the region," Kaloo observes.

Meanwhile, the inhospitable terrain posed a severe threat to the camel's existence. The newborn camel calves, unaware of their surroundings, were often drowned in the Shayok river. Those that survived frequently fell prey to wolves.

Besides, there is also an increased rate of ectopic pregnancy (extrauterine pregnancy) in such animals, which further restricts growth of their population.

Considering their present population and the threat to their existence, wildlife experts warn that if proper and immediate measures are not taken, the double-humped camels will disappear altogether from India.

Alarmed by the rapid decline in double-humped camel numbers, a number of measures were initiated both by the state government as well as local organisations to rejuvenate the Yarkandi camel population. Unfortunately, most measures were either abandoned mid-way or proved ineffectual.

According to the state animal husbandry department's records, the first survey of Yarkandi camels and the people who reared them was carried out by a working group on development of cold desert in September 1986.

It was a door-to-door survey that sought to encourage the local people to rear the animal. Local residents showed little enthusiasm towards the proposal as maintaining the animals outweighed their utility. Finally, the survey had to be dropped.

A couple of years after this survey, in 1988, the animal husbandry department purchased four camels from local breeders at the rate of Rs 1,500 per animal in an attempt to raise these camels and help them multiply. But this exercise also failed as the scientific programme needed to preserve the breed did not follow.

The latest project towards saving the camels has been taken up by the Field Research Laboratory ( frl ), a unit of the Defence Research Development Organisation ( drdo ).

In collaboration with the Indian Camel Research Institute in Bikaner, Rajasthan, frl has established a camel breeding farm in Pratabpur, Leh. Here, plans are afoot to breed the double-humped Yarkandis scient-ifically and rear them in-house with great care.

Written by Ishfaq-ul-Hassan with inputs from Arundhati Ahuja