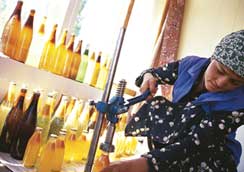 In August 2004, two officials of Ladakh Foods Limited (lfl), a Leh-based company processing seabuckthorn (Leh berry) were charged with embezzling Rs 3 crores (see 'Exposed,' Down To Earth, August 31, 2004). The scam put a spanner in the works of lfl, a public-limited company set up in 2002 to accelerate the economic growth of farmers in Ladakh. In May 2005, the Ladakh Autonomous Hill Development Council ( lahdc) decided to take matters into its own hand. The council decided that the Leh-based deputy registrar of cooperative's office would be the nodal agency for all dealings pertaining to seabuckthorn collection, its processing and marketing.

"Following this takeover, we have sold 118 tonnes of Leh berry nectar to the Delhi-based Arctic Bio Products and the Orissa-based Mamta Agro Foods Limited at the rate of Rs 67.50 per litre. Our net profits this year have been Rs 28.60 lakhs," says the deputy registrar, Tadbar Joldan. He added that modalities for distributing profits among the cooperative societies and the individual farmers were yet to be finalised.

Some farmers' cooperatives, however, trade in Leh berry nectar, independent of the deputy registrar's office. The ten-member Indus Berry Society, for example, set up a processing plant in Chuchot village, before the lfl scam. "Our plant came up in April 2003 and last year we had a turnover of Rs 6 lakh; this year, we earned Rs 13 lakh," says Denchem Angmo, a member of this society.

The Indus Berry Society has been selling its produce to the Srinagar-based Kohinoor Society. They have also found a buyer in Delhi, much to the chagrin of the lahdc. Says an official of the council, "Indus Berry's operations are in contravention of lahdc' s May 2005 order. These private units operate in a very clandestine manner." But replies Angmo, "We did want to sell the pulp to the deputy registrar's office. But they had their hands full with stocks from other cooperative societies."
Indus Berry's methods have found other takers: the 26-member Tsestalulu Society, for example, wants to set up its Leh berry processing plant in Chuchot village. "The current methods don't fetch us more than Rs 1 lakh in a season. The new processing plant will help us make value additions and also, increase our profits," said Abdul Baqi the society's cashier.

These developments have aroused much displeasure amongst lahdc officials. "There is a frenzied race to collect the maximum berries from the wild plants. This could cause severe damage to the plants," feared Joldan. Baqi tried to allay such apprehensions: "Members of our society are well-trained in collecting the berries without damaging the plants." But even he couldn't help add, "Many do beat up the seabuckthorn plants mercilessly to extract berries. The plants might stop producing berries if this state of affairs persists."

The lahdc is alive to such concerns. Its Field Research Laboratory in Leh claims to have developed a harvester that removes berries without harming seabuckthorn plants. Trials on the machine are on and initial results indicate that the harvester can extract berries six times more efficiently than the human hand.

lahdc officials believe that such mechanisation will help Ladakh's farmers stave of the threat of Chinese seabuckthorn pulp. "The Chinese sell pulp at Rs 32 per litre as against our rates of Rs 67.50 a litre. Mechanisation will help us produce more pulp and we can then sell the nectar cheap," says one council official. He also noted that the Ladakh's seabuckthorn nectar scored over its Chinese counterpart since the latter had very high sugar content.