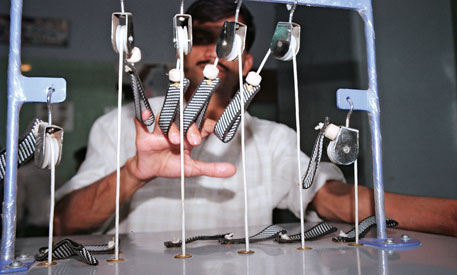 The survey was conducted following a recommendation made on a petition submitted to the Rajya Sabha. In 2007, civil society groups filed the petition with the objective of empowering leprosy-affected persons. In a follow up to the petition, Bhagat Singh Koshyari, chairperson of the Rajya Sabha committee on leprosy, said the committee was not satisfied with the action taken by the concerned ministries, including the Union Ministry of Health and Family Welfare, to integrate leprosy-affected people in the mainstream. The committee in its 2010 report notes that there should be an Act for the rehabilitation of the leprosy-affected in the 12th Five-Year Plan. And therefore, it is important to check the prevalence of the disease. Following this, the ministry conducted the sample survey.

The Indian Council of Medical Research (ICMR) and National Jalma Institute of Leprosy and other Mycobacterial Diseases in Agra are now analysing the survey findings. “The report will be tabled in Parliament in the winter session,” says V M Katoch, director general of ICMR.

The sample survey was conducted in 90 randomly selected districts. Of the 15,427,363 people screened, 2,177 had leprosy. More than 10 leprosy cases were reported in 11 states and two union territories each. Chandigarh recorded 96 cases per 100,000 population as against four cases recorded under NLEP in 2010-11. Uttar Pradesh recorded 52 cases, while NLEP says it is 12. In Andhra Pradesh, the survey brought to the fore 32 cases, NLEP data recorded only eight cases from the state (see “Leprosy returns”, Down To Earth, September 1-15, 2011). “The number of cases reported by the ministry survey is not very big,” stresses Puri.

After the government’s “eliminated” declaration, active search for patients was stopped. A programme running exclusively for leprosy was integrated with the general health services. This required the patients to visit health centres voluntarily, says Puri. “Around two million cases were reported each year before 2005. But about 130,000 are being recorded annually since the active search stopped,” says Vijaykrishnan B of Frontilles, a non-profit in Hyderabad. Civil society groups allege the dwindling numbers are a result of change in methodology to calculate the incidence and prevalence of the disease.

Manoj Varghese, technical media expert with non-profit Leprosy Mission International, says, “Despite various awareness programmes, the stigma attached to leprosy exists. Many people fail to turn up for screening. Many affected people live in remote areas and may never go to the health centres.”

With voluntary screening system, many people suffering from the disease ignore the early signs and approach the doctor late. P K Gopal, chairperson of the National Forum for Leprosy, who filed the petition in the Rajya Sabha, says, “When diagnosed late, leprosy can lead to grade two disabilities, that is, visible physical disability like deformity of fingers or ulcers in the feet. This may ultimately lead to amputations.” In grade one disability, there is sensory loss and numbness in hands and feet, he adds.