Sugarcane farmers in rural Karnataka are making jaggery using an efficient and smoke-free stove designed and promoted by a school headmaster. 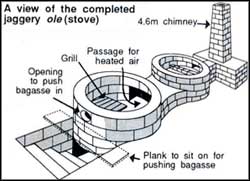 Conventional cooking stoves not only consume a lot of fuelwood, they also produce considerable smoke. Any village woman who uses such a stove will tell you that it's a big nuisance. Now this problem has been solved by the Bangalore-based Centre For Application of Science and Technology to Rural Areas (ASTRA), a division of the prestigious Indian Institute of Science. Researchers there have come up with the ASTRA ole (stove), an improvement on the conventional model. The ASTRA version uses fuelwood at higher levels of efficiency and is smoke-free.

Despite the Government's bungled promotion efforts, these stoves have become very popular in rural Karnataka, due to stellar work by many non-governmental organisations and individuals such as Ramachandra S Hegde, a primary school headmaster at Kumta in North Kanara district, who is better known for his work in designing and promoting a stove to make jaggery.

Says M Ganapathi, a social activist working in Basrur, South Kanara district, "Improved oles to make jaggery have become very popular among sugarcane farmers, both in South Kanara and North Kanara districts. The farmers find it very convenient to use, easy to maintain and economical, because it mostly uses bagasse as fuel. Hegde himself holds camps and trains people in constructing and operating these oles."

Hegde became seriously involved in scientific and technological work from 1980, following discussions with ASTRA scientists. His goal of developing a low-cost, fuel-efficient stove was prompted by the fact that traditional jaggery stoves use about 200-250 kg of wood to convert one unit (300 litres) of sugarcane juice into about 40 litres of viscose jaggery and also the shortage of fuel in around his village Unchige and North Kanara.

"Moreover, the traditional process has many other problems," Hegde noted. "The level of the pans in which the cane syrup is heated is rather low, leading to heat inefficiency. And there have been cases of children falling into the pans, or into the fire. The conventional stoves are nothing but holes in the ground." Around 1.2 million tonnes of jaggery are made annually in North Kanara district alone, consuming about 60,000 tonnes of fuelwood, Hegde said.

Hegde's stove, both simple and user-friendly is made of bricks that do not need cement mortar. A mixture of lime and brick dust or coal dust can be used instead. The stove's biggest advantage is that it can burn bagasse to produce sufficiently high temperatures to boil cane syrup and convert it into jaggery. "The traditional stoves to make jaggery need wood, otherwise high temperatures are not reached because most of the heat is lost through leakage," Hegde explained.

Hegde installed his first jaggery unit in Unchige in 1981. "Later," he recalled, "ASTRA took it up, made some modifications and tried to popularise it through the Karnataka State Council For Science and Technology." He said he has personally installed more than 50 such oles, while others have been put up by the farmers themselves.

Hegde's ole uses two identical pans. The bottom diameter of each pan is between 1.22 m and 1.4 m; the top diameter is between 1.53 m and 1.83 m and its height is about 0.3 m. About 45 litres of light jaggery or about 35 kg of thick jaggery, in moulds, can be produced at one time from the two pans, but this requires burning about 100 kg of bagasse. Normally, upto 180-270 kg of jaggery can be made daily as processing one batch of cane juice takes about four hours. Hegde says his jaggery ole, besides using bagasse, reduces fuel consumption by upto 25 per cent. "It may have two, three or more chambers, and use as many pans as there are chambers, Hegde noted. "It all depends on your requirements and the amount of jaggery you want to process. The principles are the same -- you do not let any heat leak out of the system and you regulate the air flow so that the fire does not burn out and the fuel burns totally."

Hegde explained the heat efficiency of dry bagasse is 4,444 kcal per kg, but only when the air flow and air mix are right. Given the combustion volume of the stoves, he said, only if the pans are kept at a height of at least 0.76 m from the bottom of the stove, temperatures upto 11000C can be obtained by burning 20 kg bagasse per hour.

"Many think that the oles have to have three chambers, but that is not true," commented Hegde. ASTRA scientists, he added, determined his oles have a thermal efficiency of 52 per cent, compared to 40 per cent for the conventional stoves. Moreover, as his stove can be constructed by the sugarcane field, the farmer is saved the cost of transporting fuel. Hegde contended his stove protects the environment because trees need not be cut down for fuel. "In Unchige, right from 1981," he noted, "jaggery is being made using the improved model and more than 30 tonnes of wood fuel are saved every year."

Furthermore, because the stove is smoke-free, it makes work much easier. The Hegde stove also allows the fire to be put out almost instantaneously. "This is necessary at times, when the syrup comes to a boil, to get the best quality jaggery," Hegde said. "In conventional stoves, this is a problem and often the jaggery gets a burnt flavour or a lot is lost in spillage."

Kuppa Naik, a farmer of Hattikudru village, near Basrur, installed a Hegde ole three years ago. He said he is very happy with it and gets more jaggery now because there is no waste. "Apart from the bagasse, I even use dry leaves, areca nut shells and the sheath of the areca flowers as fuel, something which I could not do earlier," he added.

Hegde holds a number of training camps each year to popularise oles of all kinds -- to make jaggery, to cook food and to heat bathing water.