Customary institutions can lead if so empowered 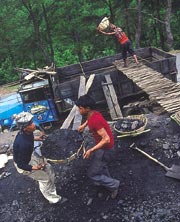 Irrespective of the party in power, Meghalaya's government has either turned adcs into mere advisory bodies, or conveniently withdrawn financial support. adcs have also been used as a political springboard for hopefuls to reach the state assembly. adcs, in turn, have meted out the exact treatment to customary institutions. A comparative look at the Panchayati Raj institutions under the 73rd amendment to the Constitution makes it evident that the entrenched structue aches for an overhaul (see table below: More complicated today). The National Commission reviewing the working of the constitution has presented a consultation paper saying as much (see box: Roadmap).

"The customary governing institutions are still enmeshed in the moral and social fibre of the society. This is specially true of rural Meghalaya where clan-based affiliations are still strong," says Mawthaw. "Well, the state government and the adcs have stunted their growth, ensured they never develop as institutions. Not an iota of capacity building has been done," says John Kharshiing. "Besides other factors, the constant haranguing matches between these three -- state government, adcs and traditional setups -- have kept Meghalaya trapped in a dole-based economy," laments a senior officer of nec, Shillong.

Sanjoy Hazarika, of the Delhi-based Centre for North-East Studies, says, "The way ahead is to create a three tier system, with the traditional village councils in each of the three hills performing the same functions as the village councils do under the panchayati raj in the rest of the country." He admits this is easier said than done. The first step obviously would be to build capacity in the traditional institutions to help align them to the demands of a new economy. Simple issues like financial robustness and accountability in a written format will have to be taken down to the village level; high literacy levels should help in this task.

The adcs were initially meant for tribal hill districts within Assam, so opinions float about their relevance today. The councils were meant to be a surrogate for a state government. experts raise doubts about their relevance now that Meghalaya is a separate state. "Maybe they have outlived their present format, its time to reevaluate their working and powers," says a senior minister in the present state government. But it's a political cat that few can afford to bell.


The initiative of the traditional chiefs to seek direct funds from the center alters the stratagem. Robert Kharshiing agrees, "If it works, this is the first step. We need to take it slowly, look at the results of the expenditure after one year, evaluate our strengths and weaknesses, go back to the people with our financial reports and let them also judge our efficacy." Tata Consultacy Services, that helped in this process, plans to set up a secretariat in Shillong to help manage, oversee and regulate the expenditure. But Kharshiing knows, in the long run, that "We will have to create livelihoods, if our economy has to self-sustain." Robert Lyngdoh, home minister of Meghalaya, says, "The tourism sector holds the key besides opening up the trade with neighboring countries." The shift towards the tertiary sector of services is visible in the recent past, too. But what no one has looked at is the consequences of shifting away from a natural resource-based economy.

"Admittedly, a natural-resource based economy cannot sustain the growth levels that current economics demand," the nec official says, "but it can become the firm backbone to bring a degree of self-reliance back into the rural population that is slowly eroding."

In the absence of sustainable exploitation of forests, people have begun to shift to mining coal. Rat pit mines dot the route to Cherrapunji in the Khasi Hills and Raliang in the Jaintia Hills. "Here too a few shall monopolise the trade as it turns lucrative and reaches a certain scale," warns Bidhayak Das, a Shillong-based journalist. Also, the challenge lies in ensuring that the mining does not reach proportions where it threatens the already fragile ecology. "Cherrapunji's bald landscape cannot take more," says Donkupar Syiem, Department of Zoology, nehu. "But the potential surely exists in the natural resources. We are trying to document the potential of medicinal plants and their chemical extracts. We have tied up with the Reliance group, where the community shall have the first rights over profits that are made from marketing their resources or extract, we are aware of the Kani tribe's example and want to replicate it successfully here," says B Kharbuli, of the same department. Neindro Syiem wants to know the potential that plants in his hima's sacred groves hold and how to systemise the traditional herb practitioners. But he is wary. "We shall tread carefully. I know our region can turn our age old traditions into profitable businesses but we have to find ways by which it is ensured that the money reaches the people. We don't want our resources to be exploited by outsiders."

The danger is if the political class does not wake up in time to realise the potential before the gusty winds of a liberalised economy reach Meghlaya, then neither the new political dispensation nor the traditional institutions will be able to find their feet or save the only asset that has kept the people going through the turmoil of the last 40 years -- natural resources. The traditional institutions can fulfil the need for a grassroot democratic set up that delivers development, but only if empowered. The big questions are: Will Meghalaya seize the day? Or go the troubling way of its neighbouring states?
Print edition Print edition Wildlife Wildlife Wildlife United States Of … Science & Technology Physical Science Life Science Influenza Influenza Imports Health Global Warming Food Security Fisheries Eye Diseases Europe Endangered Species Earthquakes Drugs Down to earth Diagnostic Methods Climate Change Birds Astronomy Allergy Agriculture Science & Technology Meghalaya Cover Story Cover Story
SUPPORT US