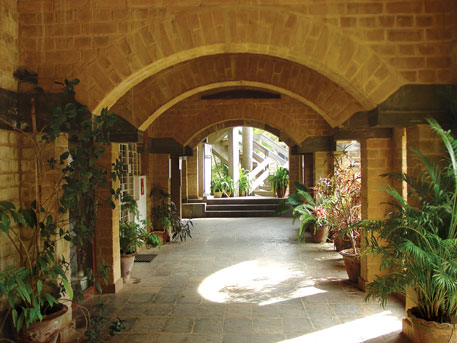 Sitting in his office, French architect Satprem Maïni says bricks and reinforced cement concrete (RCC) are among the most used products in modern architecture but not the best. “In my 23 years of practice I have used only two RCC slabs and no bricks,” says Maïni, who has been working in Auroville township, Tamil Nadu, since 1989 to develop and promote earth technologies.

His office reflects his ideology. It is made of compressed stabilised earth blocks (CSEB) (a mix of mud and cement that is pressed manually) and uses old structural elements like arches, domes and vaults. These elements are as relevant today as they were in the Egyptian and Roman eras. But the industry has largely ignored these time-tested techniques, saying they are time-consuming, resource-intensive and require highly skilled labour. “This is not entirely correct,” says Maïni who chairs UNESCO’s Earthen Architecture initiative in Asia. Modern day RCC structures rely on beams and columns, which use steel and concrete, for support, while old structures utilise the building itself by distributing its weight through arches and vaults. “Manufacturing of cement and steel contributes to environmental degradation,” points out Maïni.

Another building material that causes pollution while being produced is bricks.

CSEB is the sustainable alternative to bricks, says Maïni. Embodied energy (sum of all energy used in the construction process)Ã”Ã‡Ãªof CSEB is 10.5 times less and carbon emissions are 12.5 times less than that of a brick. It is also stronger; a CSEB has a crushing strength of seven megapascal while brick’s is 3.5 megapascal. Energy used for making bricks comes from burning firewood, which means deforestation and lesser firewood for the poor, says Maïni.

Popular perception no longer considers mud a strong and durable building medium, especially in the urban context. But innovations in mud techniques have made them dependable for urban application, says Maïni.

There is a common concern that the brick industry overexploits the fertile top soil. This worry does not apply to CSEB. Mud needed for CSEB has to be sandy and is found one metre below the surface. In fact, the earth excavated from the foundation of building can be utilised for onsite production.

CSEB can be moulded to form beams and columns. In these elements stabilised mud provides compressive strength, while use of concrete is limited to the core of the structure where it acts as a binding agent between mud and steel. CSEB blocks have more thermal mass than bricks and reduce the transfer of outside heat into the building. When CSEB blocks absorb moisture they become hotter and when they release moisture by evaporation they become cooler. “It is same as perspiration in humans,” says Maïni.

His works demonstrate use of CSEB and reliance on old load-bearing construction. For instance, the four-storey Vikas Community complex in Auroville is made with 24-cm thick walls. The complex has high vaulted ceilings with openings near the roof that act as skylights while providing ventilation. There is also a one-metre deep projection over openings to reduce direct sunlight and provide protection from rain.

Maïni has trained more than 8,000 architects and masons since 1990. But not many have adopted these earth technologies because of market dynamics, he says. “Affordability will have different meaning for different people. One can look at it from two perspectives, commercial cost and environmental cost. For me, money is not an indicator of affordability because market doesn’t play fair.”