Veteran UN negotiator and head of the UNEP during the Rio summit, Mostafa Tolba, reasons why developing countries always suffer at the hands of developed countries 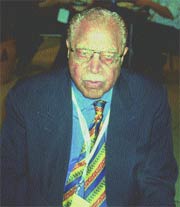 whether the us is undermining the multilateral process by shifting emphasis on partnerships
The us is against everybody in the world. Partnerships are not obligatory for governments to be accountable. They are an agreement between two people. They may announce it or they may not announce it. It has absolutely nothing to do with the system of governmental commitment. This is an inter-governmental meeting and what is required is that these governments will have to commit themselves to specific things which will be followed up. Nobody wants another 10 years to pass and then who ever lives will comes in 2012 and says very little has been achieved in Rio+20. We are not going to keep doing that.

finance
The Americans have definitely taken the stand to keep away from contributing to oda. The us was the only country which reserved its position on the 0.7 per cent oda target. This target came from the First international development strategy of the un, negotiated in 1970. At that time, the actual oda from developed countries was 0.35 per cent. Unfortunately, we are going down every year. At Rio it was 0.34 per cent, when we went to Rio+5, in 1997, in New York, it went down to 0.29 per cent. Today it is 0.22 per cent. So, we are asking for an increase and the developing countries, I'm sorry to say, are just repeating this like a broken record as if it is a holy book from somewhere. Since 1970, we never reached 0.35 per cent (in actual oda levels). Never.

compromises
Globalisation, well, the language is about human rights, the impact of globalisation, the relation between trade and environment, all these are put in one package. There may be some compromise language that will not satisfy anybody, and surely will not satisfy the outside world. But when you agree on a compromise of that sort it means you are in a language that doesn't mean anything. Something that can be interpreted by everybody. But, I am not surprised because I have been Stockholm, I have been Stockholm+10 in Nairobi, I have been in Rio and I have been in Rio +5. And nothing has changed. The situation of trade-offs at the very last minute. It is disheartening that we continue for 30-40 years using the same techniques and we don't talk openly to one another.

changes needed to break out of the present deadlock between countries
I did suggest a way (out of this deadlock) to the Commission on Sustainable Development (csd). In the first session, I had left unep and was chairing the Egyptian delegation. We were talking about finances. The developed countries were saying that taxpayer's money is misused by the developing countries. I said you have to understand that you are taking back 80 to 90 per cent of the money that you are giving us for your own experts whom you send us at very high costs, and the equipment that you force us to buy from you. You are moving your own economy with what you call aid to us. We have complaints, you have complaints. We should put on the table our concerns of how you handle finance and technology transfer, what you consider as corruption, mismanagement and so on. And let us talk sense outside this forum, where each government announces its position and then cannot step down.

Let me be very open, I think our problem is that the people in the developed countries are coming fully prepared. Each delegation comes with 15-25 people. Each one of them is supposed to talk about specific items. And he has a full brief on this -- where to go, what to negotiate, his fall back position and his limits. I don't think that we have anybody in the developing countries who has that sort of brief. So, it is the same technique of the nitty-gritty's of the comma here and there, the things that stick in their minds. The G77 meets everyday, but do they come up with a real position that they stand up for? There was some leadership in Rio. In the whole process of preparation in New York over the last three or four sessions, and the one in Bali, there was no clear leadership to me in the developing countries.

I do not know, until now, why we don't have a small secretariat for the G77? Don't tell me that 130 governments of the third world, including some of the very rich ones with oil and so on, cannot pay for 15 young qualified intelligent boys and girls from each region -- Africa, Asia and Latin America and the Caribbean -- who have been exposed to the international negotiations to go through the documents and put forward options for the governments to decide. Sometimes, they tell me that they don't want to make it formal. I say why? What are we shying from? The oecd has a secretariat in Paris that is 10 floors and full of staff. The eu has a secretariat in Brussels, a huge secretariat and one person speaking on their behalf. What is the problem with us making the G77 an official body. I know Africa has different problems from Asia, from Latin America. But we should know how to reconcile our position otherwise they are going to do what they are doing. They are going to push us against the wall because they are prepared, they know what they want and we don't know what they want. We are just saying no. We don't come up with alternatives.