In the absence of appropriate regulations, liberalisation of the Indian auto industry will ruin public health 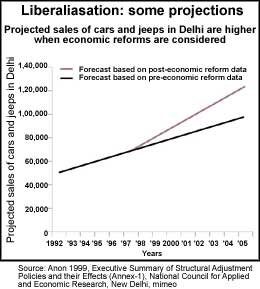 Air pollution is one of the direct results of economic growth. With the introduction of economic reforms in 1991 in India, there has been a substantial degree of liberalisation in the car industry. Industrial growth in the country seems somewhat expensive when the tremendous costs to public health due to air pollution in urban India are calculated. Between 1975 and 1995, while the Indian economy grew by 2.63 times, industrial pollution grew by 3.47 times and vehicular pollution by a whopping 7.5 times (see 'When Wealth is Not Health', Down To Earth , January 31, 1999).

The automobile industry in India boomed after economic liberalisation in 1991 (see graph: Liberalisation: some projections ). In a 1997 report, the Express Investment Week noted: "The last couple of years have seen a host of collaborations between Indian companies and leading car manufacturers from all over the world. In fact, it has almost become a status symbol for a company to flout its foreign partner." Air pollution has grown along with the car market. In 1991-92, 7,491 people died prematurely due to high levels of spm . By 1995, this figure rose to 10,000. In Indian cities, the transport sector alone accounts for 70 per cent of the air pollution.


"In terms of the car industry, liberalisation policies have two effects," explains Shreekant Gupta, associate professor at the Delhi School of Economics, commenting on the environmental impact of economic reforms. "The first is what is known as the 'scale of economic activity effect'. This implies that rise in pollution is concomitant to economic growth. The second factor is the 'technology effect'. As the market is opened, more competitors come in with better technologies that are less polluting. The technology effect should be able to weigh out the scale effect. In other words, the increase in pollution from a rising number of vehicles is mitigated by the modern technology, which is more fuel-efficient. It is probably true that the very best technology in terms of pollution control is not coming to India."

"Liberalisation should be accompanied by appropriate environmental regulations," Gupta says. He agrees that car manufacturers have been most irresponsible in promoting diesel vehicles in urban areas. "Except in the financial sector, liberalisation policies in India have not been accompanied by necessary regulatory measures," says Bibek Debroy, director of research at the Rajiv Gandhi Foundation, New Delhi. "In the West, there has been a consumer-driven movement that has checked the industry. But in India, environmental controls are solely dependent on the administration and are not consumer- or market-driven. The fact is that we have not been serious about environmental law. No company is altruistic. Left to themselves, they will not care for public health at all," says Debroy.

Written by Sopan Joshi with inputs from Durga Ray and Chandrachur Ghosh.