Captive breeding programmes a ray of hope for near-extinct turtle

After years of efforts, scientists have succeeded in breeding one of the most critically endangered species of turtles in captivity.

On June 12, 25 hatchlings of the northern river terrapin were born in Sajnekhali wildlife sanctuary of West Bengal.

Till recently, only Bronx zoo in the US had been successful in breeding this species in captivity.

The northern river terrapin or Batagur baska, listed critically endangered by IUCN, is found only in the Sundarbans. Previously, it was thought that the terrapin was also found in Malaysia and Thailand.

But Peter Praschag, a scientist with Turtle Survival Alliance (TSA), proved the species found in Malaysia and Thailand is different from the one in the Sundarbans. Three decades ago, the terrapins were found aplenty in the wild and were collected by fishermen for their meat and eggs.

But surveys in turtle meat markets indicate a sharp decline in terrapin numbers. A 1994 survey in the Indian Sundarbans concluded that only 10 mature females might be alive.

Despite many research expeditions in the recent past, the scientific community has failed to estimate the number of terrapins in the wild.

A 2005 survey by wildlife biologist A H M Ali Reza and students of Jahangirnagar University, Dhaka, concluded that the terrapin had become rare in Bangladesh’s Sundarbans.

A 2006 research expedition in the Indian Sundarbans found that since 2001 fishermen had not caught a single terrapin.

Terrapins travel some 80 km from freshwater habitats to sandy beaches near the Bay of Bengal to lay eggs. After laying eggs, they return to the freshwater.

But salinity levels in the Sundarbans have risen over the years, even in freshwater rivers, which could be upsetting the terrapin’s natural migration, believes Partha Dey who was part of the 2006 research expedition.

With the decline in the population of terrapins in the wild, captive breeding programmes play an important role in their conservation. In 2006, TSA and the forest department of West Bengal joined hands to save the terrapin (see ‘Hope lies in captive breeding’).

A young terrapin was rescued from a fisherman’s net in West Bengal in 2006. The forest department took the young one and kept it at Sajnekhali along with the other terrapins as initial brooder stock for captive breeding.

At present, there are two males, eight females and one juvenile in Sajnekhali. Referring to the 25 hatchlings at the wildlife sanctuary, Praschag says, “Whether they originated from one or more than one female is unknown.”

Experience shows that vertebrate species of a small number of reproducing specimens can recover if breeding lines are created, explains Praschag.

To create breeding lines, it is crucial to look into the genetic status of the species, says Praschag. These breeding lines should be kept separate by creating smaller ponds with nesting beaches and fencing.

Praschag says the team collected data in the areas of the Sundarbans, which have historic presence of the terrapins, to compare temperature regimes. 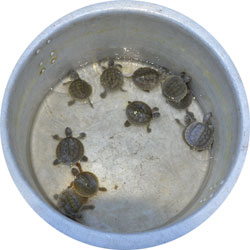 If the incubation temperature of eggs is high, hatchlings are males, whereas lower temperature results in females.

“It would make sense to determine the sex of hatchlings to avoid production of just one sex, especially males,” he adds.

The effort to revive the terrapin does not end in the Sundarbans. Vienna Zoo in Austria, which houses nine (three males, three females and three juveniles) terrapins, will soon send a male to the Madras Crocodile Bank Trust to complete a small breeding group.

The trust, a non-governmental environment organisation, has two female terrapins, which were rescued from a market in Kolkata.