A hospital for cardiac patients in Ahmedabad is sunlit to cheer up patients. It saves energy, too 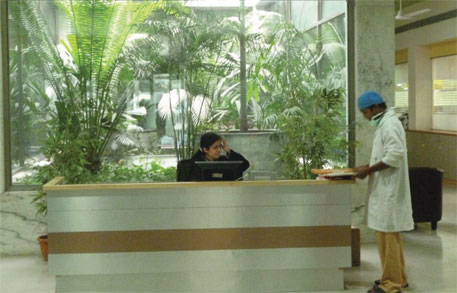 Hospitals are difficult to design. There are far too many health safety concerns that must not be ignored and very high hygiene standards to be adhered to. Architects, therefore, rarely choose to construct hospitals as eco-sensitive buildings, says senior architect Ashok B Lall. The Care Institute of Medical Sciences (CIMS) building at Ahmedabad has achieved this feat of integrating eco-sensitive elements of design into the building without compromising on the hospital’s standards. The 150-bed hospital was inaugurated in July 2010. It has three floors, a basement, eight operation theatres and two catheterisation laboratories.

Architect Surya Kakani built the 10,000 sq m CIMS where patients could feel at home and get ample movement and breathing space. He brought natural light inside the hospital’s grimmest areas—the ICU and the operation theatre. The building has a thick and tough outer shell yet soft insides, says Kakani.

Drawing inspiration from traditional courtyards, each of the four blocks in the building stand independently and are connected with courtyards. “Open spaces were either used to plant locally available tree species or turned into courtyards. This allows entry of natural light and cuts down electricity consumption,” says Kakani.

Natural light has a calming affect and the green environment lifts spirits up, says a patient in the hospital’s ICU. “In operation theatres it is difficult to keep track of time. Entry of natural light is very helpful here,” says anesthetist Ketul Patel. “Eighty per cent of the patients in this super-specialty hospital have cardiac problems. They need natural light, seamless services with less congested environment for fast recovery,” says cardiologist Milan Chag. “All these have been well thought out,” he says.

To give more movement space in the hospital, services such as cables, gas pipes and plumbing occupy once common duct. Minimising service area space reduces false ceiling area and thus cost. It also gives 3.6 m clear height of the rooms, and, therefore, better air quality to patients. The wardrooms have been plastered with washable smooth lime to reduce the risk from volatile organic compounds in paints. They can cause allergies and affect kidneys and the nervous system.

Taking off the load

Four years ago, a group of doctors, mostly established cardiologists, approached Kakani to construct an eco-sensitive building. He chose to use the largely forgotten load-bearing technique rather than the much-too-prevalent RCC (reinforced cement concrete) structure. RCC structures have steel bars for tensile strength and concrete for compressive strength in the beams and columns of buildings. The walls cover the building like a curtain. Load-bearing structures use building blocks such as bricks or stones. The walls are the primary means of transferring the building’s load to the ground.

Such structures cut down energy consumption and provide better insulation because of minimum use of steel, which has high embodied energy. Embodied energy is the total energy used in making a construction material. The walls are made primarily of flyash bricks. Flyash used to make bricks come from refuse of large thermal power plants. A total of 0.3 million bricks were used to construct the hospital. Load-bearing structures make the building earthquake-resistant up to four storeys. Ahmedabad has witnessed severe earthquakes in the past. 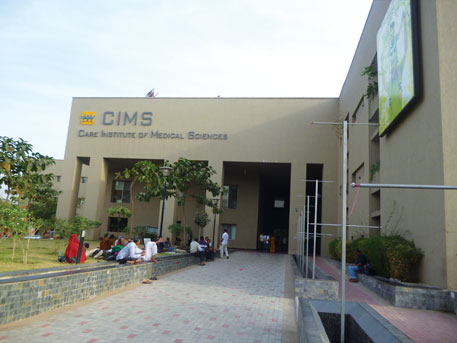 An intelligent balance of right materials and suitable design strategies go a long way in making a building energy-efficient. Glass is highly used in modern buildings because of its mass appeal for naturally lighting up buildings. However, most of the glass used has only contributed to rising electricity bills (see ‘Reflections on glass’, Down To Earth, December 15, 2012). “Glass retains heat inside the building which leads to reliance on air-conditioners. Glass has high embodied energy,” says Kakani.

Making a load-bearing stucture also increased work opportunities for skilled labour. “Masons are dwindling in number because most of the real estate construction is moving towards pre-fabricated techniques and machinery,” Kakani says.

Taking a cue from the local practice, flooring of the terrace is done by broken glazed tile leftovers from bathroom constructions. These heat-reflective tiles insulate and water-proof the terrace.

And when it rains, efforts have been made to recharge the water. Also, the hospital’s sewage treatment plant, which has 75,000 litres per day capacity, allows reuse of water in the toilet flush, cooling tower and for gardening. Water requirement has been reduced by planting local plant species which have adapted themselves to the environment and require less water.

When making a building take a holistic approach, says Kakani. Do not spend a lot of money to create energy-efficient spaces. “It will go a long way in achieving economy of resources, which is a more fundamental way of thinking green,” says Kakani. He was able to reduce the building cost to Rs 1,800 per square foot (1 sq foot=0.09 sq m). This includes cost of civil work, interiors, electricals, HVAC (heating, ventilation and air-conditioning), plumbing, fire-fighting, site development, and even municipal and professional fee. In Ahmedabad and neighbouring areas, the cost for a similar building is Rs 2,500 to Rs 3,000 per square foot.

In his other projects, too, Kakani has managed to reduce cost in different ways. He used rubble from the earthquake that hit Gujarat in 2001 to construct a school building in Rajkot. Most of the rubble was dumped outside the city.

Kakani’s home, too, is a model example of green living. When he renovated his house, among the first things he initiated was removal of air-conditioners. With a wind-catcher installed on top of his two-and-a-half-storeys house, Kakani created vents that bring cool air down to the rooms in summer nights. “This does not work when it rains, but it rains only for a brief period. I do not feel the need for air-conditioners,” he says.