Linking up to stay afloat

People affected by an irrigation project in Rajasthan are not only speaking out collectively against the insensitivity, they are teaming up with others in same soup

Linking up to stay afloat 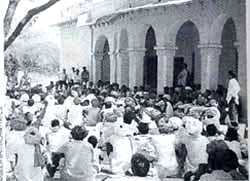 DEOLI had seen nothing like it. On April 25, over 500 villagers took out a rally through this small township in the Tonk district of Rajasthan, under the banner of the Samanvay Samiti, Bisalpur Bandh Doob Kshetra. They were protesting against the inadequacy of rehabilitation measures for the Bisalpur Drinking Water Supply-cum-Irrigation Project of the Rajasthan irrigation department. The protestors filed to the local tehsildar's office, where they staged a demonstration.

The rally marked the culmination of the 3-day Bandh Prabhavit Sangharsh Sammelan, held at the Gandhi Maidan in Deoli. The meet was the beginning of networking between the project affected people of Rajasthan. Residents of the 63 villages falling in the submergence zone of the project were at the meet en masse; they trooped in on foot, in buses, in trucks and even on tractors to "form a force against the government", as Suraj Mal of Inderpura village put it.


The meet also drew representatives from the dam-affected people of Rajasthan, Madhya Pradesh and Gujarat, and some support also came from Himachal Pradesh and Uttar Pradesh. Sunderlal Bahuguna -- of the Chipko movement fame -- sent a letter of support and a similar message was received from the Pong dam oustees. Among the groups that participated in the meet were the Chandrashekhar Kisan Sangharsh Samiti, the Mansarovar Bandh Sangharsh Samiti, the Prayas Sansthan, the Narmada Bachao Andolan, the Bargi Bandh Prabhavit Avem Visthapit Sangh and the Tawa Bandh Visthapit Sangh.

Says Ravi Hemadri, who was instrumental in organising the meet, "We have gathered here to form a federation of affected persons. This will initially be done at the state level." To this end, a forum has been set up which is to meet in the last week of June to thrash out details.

Similar populist efforts are on in Madhya Pradesh and Gujarat. Alok Aggarwal of NBA says that two yatras covering 20 districts in Madhya Pradesh were undertaken between April 1 and April 10. The first moved from Barwani to Tawa and the second covered Chattisgarh, Bundelkhand and Baghelkhand. On April 18, a demonstration was held in front of the Vidhan Sabha in Bhopal.

In an effort to get organised, an executive committee of the Samanvay Samiti was formed to co-ordinate activities relating to the agitation. Comprising 2 representatives from each village, the committee will be responsible for mobilising support. For now the Samanvay Samiti is considering blocking roads, forcibly stopping construction or even disrupting the water supply to pressurise the government.

The Bisalpur dam, which has a reservoir level of 315.5 m and a maximum height of 39.5 m above the deepest foundation, is nearing completion. Project officials, however, acknowledge that the required clearances from the Union ministries of environment and forests, and of welfare, have yet to come through; they intend commissioning the dam by June 1995, 3 years behind schedule.

The dam will submerge 21,836 ha. Out of an estimated outlay of Rs 328 crore, Rs 80 crore has been set aside for acquiring land to rehabilitate the oustees. Land has been reserved in Bikaner and Sawai Madhopur districts. Ironically, the Ajmer administration has refused to provide land for the purpose.


Officials say the dam will irrigate 49,900 ha in Tonk, Ajmer and Sawai Madhopur districts and will supply drinking water to the thirsty towns of Ajmer, Jaipur, Beawar and Nasirabad. About 66 per cent of the water is earmarked for urban centres.

In 1991, the state irrigation department had requested M Hasan of the Harish Chandra Mathur Institute of Public Administration in Jaipur to assess the possible impact of the project and recommend remedial measures. Hasan had suggested that the affected people be consulted before a rehabilitation package is finalised. He said the government should allot alternative land as close as possible to the original sites before commencing construction, and an entire village or community should be settled at one site. Hasan recommended that an open lottery scheme be followed for allotment to rule out nepotism, and that 4 to 6 ha of land be made available to oustees at a reserved price. Although the report was submitted in August 1991, it has yet to be handed over to MEF, according to Hasan. "What I said in my report was, in many ways, not what they wanted to hear," he says.

The villagers criticise the land valuation methods adopted by the authorities. Although the norms clearly stipulate that the price of land be fixed as per the market rates, outdated revenue records are being used for evaluation. Besides, the records do not reflect the transformation of non-irrigated land to irrigated land.


Khem Raj Meena of Inderpura village says that irrigated land has been valued at Rs 4,500 per ha in his village, while the prevailing market rates were as much as Rs 15,000 per ha. He adds that although all the land in his village was irrigated, the records show only 25 per cent.

The project affected people demand that sons over 18 years of age and unmarried daughters be considered as separate families. They add that land should be provided as compensation instead of cash. A survey by Hasan's team shows that the residents of 44 villages opted for land as compensation, only 6 for cash and 13 for both.

Hemadri says that only title holders are being considered for compensation, while the landless -- whose income depends on the submergence areas -- are being left out. And Chittar of Sandla village alleges that money is being extorted. For compensation for 1 ha of irrigated land, Rs 800 was being extorted, he says, and so far Rs 70,000 has been collected from his village.

Project officials, predictably, dismiss the allegations outright. They are also reluctant to take on the responsibility of updating revenue records. "It is upto the revenue department to tackle this matter," superintending engineer S Bakliwal says. He also rules out community settlement. "We do not have so much land," he says.

The administration will, nevertheless, have to tread carefully. It is under tremendous pressure to augment water supply in urban areas. In Ajmer, politicians, lawyers, journalists and social workers have been demonstrating frequently for more water. In Beawar, the situation has precipitated violent clashes with the police.

The question is whether rural concerns will outweigh urban demands. For the villagers, securing their rights is now a matter of prestige. The slogan "Hum apne adhikaar mangte, nahin kisi se bheek mangte (We want our rights, not alms)," resonates throughout the area.