What exactly is this US patent on the cow urine-antibiotic combination? 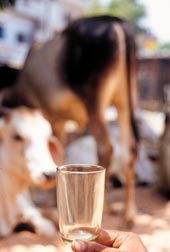 It doesn't make for easy reading but you might as well do so. Here's an abstract from patent number 6,410,059 in the us Patent and Trademark Office (uspto), granted on June 25, 2002, which featured widely as a 'patent on cow urine': "A pharmaceutical composition comprising an antibiotic and cow urine distillate in an amount effective to enhance antimicrobial effect of the antibiotic is disclosed." Sounds like Greek? Simply put this means that thanks to cow urine distillate, the pill you pop may get more potent.

Now go get your doctor's prescription. Check if the following drugs are mentioned: antibiotics like ampicillin, tetracycline, rifampicin, quinalone, isoniazid; anti-fungal drugs including azoles, clotrimazole, mystatin and amphotericin; anti-tuberculosis drugs including pyrazinamide and ethambutal. The cow urine distillate has been shown to increase the effectiveness of these drugs, significantly improving a patient's chances of recovery -- by as much as two to 80-fold.

The catch is you might have to wait for 10 years. Or more. Because that's how long it could take the Central Institute for Medicinal and Aromatic Plants (cimap) in Lucknow, where the combination was developed, to conduct the elaborate trials for making a concept product that a drug manufacturer might license and mass-produce. cimap, a body of the Council of Scientific and Industrial Research (csir), obtained the cow urine distillate from the Go-Vigyan Anusandhan Kendra (gvak), a Vishwa Hindu Parishad outfit in Nagpur. Interestingly, gvak's stated mission is to "establish firm scientific basis of eco-friendly cow-centred economics" (www.govigyan.com).

The most obvious question is: so what's new about this since the medicinal values of cow urine are common knowledge? The answer is simple, explains Suman P S Khanuja, director of cimap and leader of the research team. The patent is not on cow urine. It merely shows that if used in the right combination with complex modern drugs, the 'distillate' of cow urine makes the drugs more potent (and works as a 'bioenhancer'). Or increases your body's ability to use the drug (hence increasing 'bioavailability').

You either need less of the drug to get better (and hence risk fewer side-effects) or the same amount of drug produces better results. Either way, the patient's the winner. "Tradition does not specify the bioenhancing potential of cow urine," Khanuja clarifies, though he acknowledges the clue provided by Indian traditional knowledge.

csir director-general R A Mashelkar says this is also the reason why this patent is less likely to get revoked, a concern raised in the media with references to the 'turmeric case'. In 1995, the uspto granted a patent to University of Mississippi researchers for 'discovering' the wound-healing properties of turmeric. csir contested the claim and got the patent cancelled after showing a medieval document in Persian script that mentions the uses of turmeric for wound healing. So, what if somebody comes up with a medieval ayurvedic text that documents similar use of cow urine? Impossible, says Vaidya Balendu Prakash of Dehradun, because ayurveda does not deal with antibiotic bacteriology. He welcomes the patent as a good use of traditional knowledge.

Now here's something about the patent that isn't common knowledge: "...the urine distillate from buffalo, camel and deer provides similar activity of bioavailability." For a country with the largest livestock in the world, this invention offers great opportunities. Suresh H Dawle, a co-inventor from Nagpur, says one litre of cow urine gives 750 millilitres of distillate on an average.

The combination might also help reduce the inputs (and the resultant costs) of manufacturing drugs like Taxol, an anti-cancer agent derived from the bark of the Pacific Yew tree. With this combination, fewer trees would need to be felled, says Mashelkar. csir has applied for the patent in India, too, but it could take up to six years before it is granted.

(Search for the patent's full text by its number at www.uspto.gov)