Living in style in Ladakh

Living in style in Ladakh 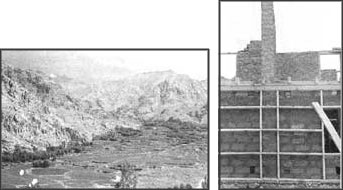 "CULTIVATION in Ladakh is backbreaking because the water for irrigation has to hauled manually," says Soso of Phiang village, who is a clerk for the Ladakh Scouts. "But now life is easier, thanks to the irrigation pumps set up by the Ladakh Ecological Development Group."

The narrow valley of the Phiang, 40 km from Leh, is in stark contrast to the surrounding barren mountains. The soil hardly supports any vegetation except in the meadows. The grass cover is mostly absent and even where it grows, there's overgrazing. Only 0.2 percent of the total area is cultivated. Barley, potato, turnip, mustard and some other vegetables are cultivated in summer, irrigated by gravity-fed channels and manually-operated lift pumps. Life in Ladakh is made harsher by the extreme temperature variation (300 C in summer to -250 C in winter) and low precipitation (annual average: 8 cm).

But ever since Helena Norberg-Hodge, a Swedish linguist, set up the Ladakh Project in 1978, winters in far-flung villages like Kubet, 150 km from Siachen, Stokna in south Ladakh and Dha are more tolerable because of improved housing. In these villages, vegetables are grown throughout the year in greenhouses and water is available through pumps.

In 1983, the Ladakh Project was expanded to form the Ladakh Ecological Development Group (LEDeG). LEDeG, with 80 full-time employees, works in 50 locations in the district. It is funded by the Swedish Nature Fund and Danish Church Aid. In 1986, Norberg-Hodge received the United Nations Right Livelihood Award for her work.

LEDeG introduced the RAM pump, extolled by Soso and others, to lift water for areas not covered by gravity-fed channels. These simple and easily constructed pumps use part of the water flow to get the energy to lift water and are remarkably efficient. For instance, at the Matho monastery, it raises 6 litres of water in a minute by about 150 feet. Last year, LEDeG installed 100 such pumps for domestic use and 4 for irrigation, with finance from the Centre for Advancement of Appropriate and Rural Technology, an NGO based in New Delhi.

In housing, LEDeG has adapted some novel European technologies to local conditions. Two methods are used to trap solar energy for heating: in the direct gain method, the living room, which traditionally juts out from the rest of the house, is constructed facing the south or east and has a timber frame fitted with glass instead of walls. Traditional building materials like mud-bricks, timber and reeds are still used to build the houses. The room is easily heated during the day but cools rapidly after sundown. A better method is the construction of Trombe walls, designed in 1972 by F Trombe, a French architect. Trombe walls consist of a timber frame fitted with glass which is attached to the thick mud-brick wall at a gap of 25 cm. The trapped air acts as an insulator.

Says Tashichombel, a young civil engineer working with LEDeG, "In the last one and half years, we built 6 houses with Trombe walls and 20 with direct-gain units. These numbers may not seem to be large, but in Ladakh, with a population density of 1.52 persons per sq km and many 1 to 2 family villages, it is quite a feat." LEDeG also provides small incentives depending upon the location and the economic condition of the individual. This method has proved so popular that many people around Leh have used the technology to build their houses independent of LEDeG.

LEDeG also runs workshops on health and sanitation in the villages and training centres for handicrafts, carpentry and other vocations. At any time, there are about 100 trainees at its headquarters at Leh, mostly from remote villages, who are given raw materials and a stipend of Rs 200 a month. The products are marketed by LEDeG.

However, not all of LEDeG's projects are successful. The solar cookers and heaters introduced by it have been unmitigated disasters. Local food can neither be cooked nor fried in the cookers. Many young people in Leh feel that these were gimmicks to impress foreign visitors.

This feeling is not entirely unjustified. Talking to LEDeG employees, one gets the impression that people's participation is limited to their being trained in some trade. The local people, too, feel the same. But at the same time, they point out that the technologies propagated by LEDeG are such that they will continue even if the organisation withdraws.