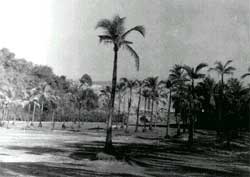 the decision of the Kerala State Mineral Development Corporation Limited (ksmdcl) to join hands with the Gujarat Mineral Development Corporation Limited (gmdc) in a mining venture, at Madayipara in north Kannur district, has invited the wrath of the villagers of Madayi. Residents of the village fear that the joint venture will place their future in peril.

ksmdcl authorities declared their intentions of mining lignite and China clay from an area which is part of a 365-ha laterite plateau, 30 m above the ground level at Madayi -- about 25 km from Kannur -- in late November, last year. The prospects for mining in the area were known when the Kerala Mineral Exploration Development Project -- with assistance from the European Community -- conducted explorations there in search of mineral deposits. It is estimated that the Madayipara region contains deposits of about 5.5 million tonnes (mt) of lignite and 29 mt of China clay. This resource could be mined for 20 years. According to Manoj Joshi, managing director of ksmdcl, the proposed project will cost Rs 9 crore and a memorandum of understanding between the two parties had been signed on November 30, 1995. Madayipara's elevation is also likely to drop from 30 m to 15 m, once mining commences.

As the authorities seem determined to continue with their plans for mining in the area, the villagers of Madayi (a panchayat with 13 wards and a population of around 38,000) have decided not to allow mining at Madayipara. The villagers believe that what the authorities have termed as being promising mining prospects could spell disaster for them. They have organised themselves into a forum called the Madayipara Protection Committee (mpc) to oppose mining activities. Their agitation was formally given the green signal by the environmental-activist-leader of the Narmada Bachao Andolan, Medha Patkar, on February 9, this year. The villagers and environmental activists formed a human chain around Madayipara on February 29, to express their protest against the mining plans.

"This plateau is the lifeline of the entire village," said Jafer Palot, an ornithologist from Madayi. To substantiate his argument he described the unique location of Madayipara, a table surrounded by rivers and backwaters, close to the Arabian Sea. According to him, "During the rainy season, a large amount of water which falls on the 365 ha of land comprising Madayipara, is filtered into the ground through the depressions in it." The discharge of this water from Madayipara is the only source of drinking water for the entire village during the summer months.

The villagers and environmentalists argue that if Madayipara is destroyed, the inflow of saline water from the sea into the ground water of the village will ruin Madayi. "In fact, the plateau acts as a very important watershed for the surrounding region," argues P Narayan Kutti, a teacher from Madayi who is also a district committee member of the Kerala Sastra Sahitya Parishad. Kutti also points out that since Madayipara is a vital watershed, the Vadukuntha lake -- near the Vadukuntha Shiva temple in Madayipara -- does not dry up even in peak summer."Apart from being of hydrological significance, the plateau is unique in terms of biodiversity," says Jafer Palot, who has done extensive biodiversity mapping of Madayipara. According to his studies, the plateau is home to a rare ecosystem. "One can identify about 88 species of butterflies and 90 species of plants during the rainy season," he acknowledges. "This is the sign of any healthy ecosystem," he adds. Interestingly, Jafer has found out that the majority of plants in Madayipara are insectivorous. "There are few places in Kerala with such a high concentration of insectivorous plants," he says.

Although the authorities planned to start mining by February, opposition from the locals have compelled them to have an environment impact assessment (eia) of the project done before starting the mining operations. According to Manoj Joshi, the eia is being done by a Central government agency.

The villagers of Madayi have in fact been agitating since 1992 when China clay was being mined from an eight-ha plot in the western part of Madayipara by the Kerala Clays and Ceramics Productions Limited (kccpl), a state government-owned company. "So far about 40.5 ha of cultivated land and nearly 100 bore wells from the vicinity of that mine have been rendered useless due to the pollution spread by it," says G Vilson, whose 0.75-ha piece of cultivated land became barren due to the mining. "Heaps of waste dissolved in the rain water and the pollutants released from the waste penetrated into the ground water," he adds. Streams in the surrounding area have also been turned into a death-trap for the fishes in them. The members of the mpc allege that the directions of the Kerala State Pollution Control Board have been flouted all the while by the clay mining activities.

"If this smallscale eight-ha mining operation could bring about this much damage to the environment," reacts P P Krishnan Master, convener of mpc, "no one need tell us about the after-effects of the mining on 365 ha of land."

"Moreover," argues P Gopalan, another member of the mpc, "One cannot write about Kerala's history without mentioning Madayipara." Gopalan points out that the area boasts of historical monuments like a church -- one of the oldest in Kerala -- an ancient Devi temple, a Shiva temple and the remains of the 17th century jewish settlements situated on this plateau. The presence of these relics makes Madayipara a place of great historical value, in addition to being environmentally sensitive.

But all these qualifications do not seem to deter the authorities from going ahead with their plans. "The mining will be done in an eco-friendly manner," assures Manoj Joshi, justifying the exercise. But as one sees it, his assurances have not allayed the fears of the villagers, but only stoked their confidence in a non-existent future.