Living on love and fresh air

Living on love and fresh air

A family that has little use for cash

The morning I went to meet her Anusuyabai Meshram did something she does not usually do--milk one of her cows. It was a special day the Meshrams were having guests. "We do not need milk on a daily basis," she explained cheerfully as she served us tea, "Because we drink our tea black."

There are many other things that Anusuyabai, 44, and her 47-year-old husband Pandurang Meshram do not need electricity, piped water, security, a weather-proof house, regular social contact, and for the most part, even money.

For the past eight years, this couple has been living by choice on their seven acre (2.8 hectare) ancestral farm outside village Wasriphode in Maharashra's Yavatmal district without these facilities. Their joy in living a simple life shows on their faces. "We live like this because we like to," Pandurang said. "Two years ago our only daughter, Manisha, was married.Now we are free of parental responsibilities," he added.

Before moving to Wasriphode, Pandurang had worked as a mechanic and driver and also in a fishery for a few years, but the couple was never happy. "We were always anxious about something or the other, especially money and rising prices. Finally we decided to move away here and grow our own food so that we could live without worries," he said.

Over the past eight years, the Meshrams have evolved a lifestyle that requires minimal money. They plant cotton on three of their seven acres, and food crops--jowar millets, a variety of legumes, vegetables, oilseeds and spices on the rest.

The cotton--an indigenious variety--earns them around Rs 40,000 annually, which is enough to buy wheat, rice, the occasional set of clothing and a few necessities; perform their duties on social occasions like weddings in the family, and save a little.

"We do not need money to spend on addictions like tobacco or alcohol, or on visits to doctors," Anusuyabai said.

For transport they have a bicycle, which, they claim is enough, because apart from a monthly pilgrimage to Mahur about 75 km away, they never need to travel more than 25-30 km. They get enough fuelwood from the trees on their land. They harvest food items according to their requirements, leaving the rest on the field for whoever needs them. The couple says that they have never run short of food, and hardly ever harvest more than half of the crops they grow.

"This year we had an excellent okra crop," Pandurang said, pointing to a plant still standing amid a festoon of dried pods, "Each plant yielded more than 100 pods. I gathered baskets of them and heaped them on the roadside for whoever wanted them."

Has he never considered selling his excess produce for money? "Yes, but loche wadteel (it will only create complications)," he replied without missing a beat. This sentence appears to be a refrain with the couple. Why don't they get an electric connection that they can very well afford? Why don't they add to their income by selling the milk from their nine cows? Why don't they avail of government subsidies? Why don't they put their money in a bank? The answer is the same always.

It took some coaxing to get Pandurang to explain the nature of the complications "See, if we get electricity, we will have to earn extra to pay bills, and will be frustrated over power cuts. If we sell our extra produce, I will have to spend more time in the market than with my land and animals. Subsidy means bribing officials."

So why do they bother to grow more than they need? "So we have something to give," he said with touching humility, "Villagers regularly take vegetables and lentils from our farm. Everyone trusts us and we trust everyone."

Love and trust. That appears to be the dominant philosophy of the couple. 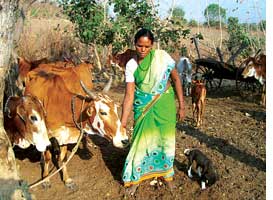 Dogs, cats and cattle live in harmony on the farm, and injured wild animals find their way there too. "I have seen a peacock, a deer and a hare in their farm at different times," says Sucheta Ingole of Dharamitra, a non-profit which works in the area of organic farming.

"It is because of these animals that we don't get lonely," explained Anusuyabai, "We have them for love, not for making money."

But what about the investment involved in growing those extra crops and keeping the livestock? "What investment?" asked Pandurang.

This brings us to one of the most important achievements of the Meshrams zero-budget farming. The Meshrams have switched completely to organic farming. They preserve indigenous seeds (and give freely to whoever needs them) of a wide variety of crops they grow. Mulching and contour bunding have enriched the land and reduced the need for irrigation, and have no need for pest control. All other farming techniques have been simplified to a point where the need for labour is minimal.

"We do all the work and in any case our farm does not require more than three hours of work a day," Anusuya-bai said.

"Initially, we taught them techniques for making vermicompost, vermiwash, organic pesticide. But after a year or two, they simply took to tying their animals under some neem trees on the farm. The falling leaves, animal dung, urine and fodder waste accumulating under the trees combined into the best fertilizer-cum-pest repellant you ever saw. I have never heard of crop failure or a pest attack on their farm," Ingole said.

The same simplicity characterizes their financial transactions. The Meshrams keep their money with a trusted money-lender, refusing to bank, but most of their savings are spent in helping relatives.

For the last two years they have been planning to rebuild their mud-and-tile house, which is sagging, but never got around to doing it because they gave away their money to relatives who were in need. "It does not matter," said a cheerful, sunburnt Ansuyabai, "We are used to living in the open with our animals. We will build the house when people repay us."

They do keep a nest-egg for an emergency though, but neither of them knows exactly how much they have. "I have everything written down," says Pandurang, who has an education up to the fourth grade, with a careless wave of his hand, "And anyway, the man is trustworthy."

The Meshrams have inspired Tarak Kate, agricultural scientist and founder of Dharamitra. A year ago Kate, 60, retired from the non-profit and started living on his own one hectare.

The Meshrams have no doubts nor fear about sustaining their unique self-sufficient lifestyle till the end of their lives. "When you love the land, it yields in abundance. When you love trees and animals, they love you in return. What else do you need to live?"