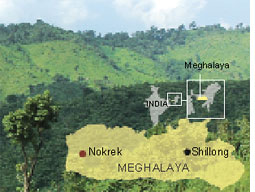 The Indian wild orange, believed to be the progenitor of all citrus species in the world, grows here. Now the area may attain the status of a Unesco Heritage Site.

The Union Ministry of Environment and Forests has nominated Nokrek biosphere reserve in Megha-laya's Garo hills for this world status and forwarded its recommendation to United Nations Educational, Scientific and Cultural Organization, or Unesco.

Though Unesco is yet to get back on it, scientists and forest officials say the recognition will put Nokrek on the world map. The status will bring more facilities to the reserve for effective conservation and monitoring.

The nomination was made after a study by the Botanical Survey of India (bsi), Kolkata revealed that 10 per cent of the plants in Nokrek biosphere reserve are rare and endangered.Scientists from bsi say immense research needs to be done to understand the region's unique biodiversity.

Teeming with wildlife at an altitude of 1,418 metres above sea level--the highest point of the Garo hills--Nokrek is known for preserving a rich diversity in indigenous citrus varieties. A section of the biosphere reserve was declared the National Citrus Gene Sanctuary after Indian wild oranges (Citrus indica Tanaka) were found there in 1984.

According to the National Bureau of Plant Genetic Resources (nbpgr), New Delhi, a distinct microclimate, with a combination of tropical and temperate seasons and heavy rainfall, offers an environment conducive to citrus plants. Rare varieties such as Citrus macroptera (Melanesian sour orange), Citrus aurantifolia (lemon) and Citrus grandis (pummelo) grow abundantly in the region. "The gene sanctuary was established to preserve these rare species of citrus plants," said Tony Marak, a forest official of Meghalaya.

Though genetic diversity is preserved at the gene sanctuary there is some cause for concern. S K Malik, senior scientist at nbpgr, said increasing human intervention around the gene sanctuary is affecting the habitat's natural balance.


"Recognition by Unesco will help generate funds for Nokrek as well as for spreading awareness among local communities," said Sunil Kumar, Chief Conservator of Forests, Meghalaya.

Though the World Conservation Union, or iucn, lists certain indigenous species including Citrus indica and Citrus macroptera as endangered, scientists at bsi say several local varieties such as chimbal, slonga, chamba, kampil are yet to be identified scientifically. Hence there is a need to conduct biosystematic studies of all plant species in the area. "If managed and exploited in a sustainable manner, this would act as a treasure house of important genes for developing disease-tolerant and high-yielding citrus varieties," said Malik.

"The vast genetic diversity in Nokrek can also be used to develop hybrid varieties with medicinal values," said H S Debnath, deputy director and principal investigator of bsi. Communities in the Garo hills are already aware of the curative properties of several indigenous citrus varieties. For instance, they use the Indian wild orange (locally known as memang narang) to cure jaundice and stomach ailments. "A thorough study will help understand and eventually tap their medicinal property," said Malik.

There are many more uncharted areas in this biosphere that warrant a thorough study. The bsi research team of recently collected fossils of marine origin from South Garo Hills district proof of life forms including crabs, plant seeds, leaves and marine species were found. "These fossils reinforce the idea that the lower Hima-layas were once near a coast," said Debnath.

It is not just the scientific community that is excited about the biosphere reserve's world status. For people like Dipu Marak, who works with Achik Tourism Society, Nokrek being declared a World Heritage Site spells a windfall. "It will boost tourism."