Three rooms of London's Lisson Gallery are currently home to 21 blocks of recycled human waste.  I walk in between them, passing my fingers over the surface of one, round the corner of another. They don't smell, crumble or smudge.They are not distasteful to the eyes. They are large as doors and, having travelled here from Delhi, look hardwearing. A lick of paint and they could be your bedroom door, your kitchen table.

But this is not a hardware store. I am in an art gallery and the question is: how does recycled human waste come to be art?

21 anthropometric modules is part of an exhibition of new major works by Spanish artist Santiago Sierra. Other works in the exhibition demonstrate Sierra's concern with social exclusion, the abuse of power and the destructive potential of urban lifestyles. 1549 State Crimes documents the death or disappearance of 1,549 individuals due to political violence in Mexico, with a voice reading each name aloud. In another room four vehicles with running engines pump smoke through pipes into the outside air.

But all of Sierra's works are really about waste, the waste of human life, polluting waste emissions. And this display of recycled human waste is about social exclusion and relations of power. For ages the most oppressed members of Indian society have been forced to clean up and dispose of human waste. Today over half a million people in India work as scavengers, cleaning toilet systems with their hands. The most impure matter is the responsibility of those regarded as the most impure: the lowest castes and women.

Bindeshwar Pathak, founder of Sulabh International Social Service Organisation, which collaborated with Sierra in creating this work of art, said, "Toilets are not often spoken of, and this silence sounds strikingly similar to the politically correct discourse that surrounds the inequities of class, caste and gender." This oppressive system depends on schools of thought that separate the material world from the spiritual, rejecting the body in the hope of achieving spiritual purity. Sierra's work not just breaks this taboo, but rejects the power system that forces the lowest members of society to deal with human waste. He turns the collection of human waste into the work of artists, and the faeces themselves into a tool for social and environmental change.

The faeces were collected in Delhi and Jaipur and left for three years, during which time they degraded and dried, becoming like earth. When faeces decompose they emit gases which escape into the air, and liquid drains away, leaving solid remains. These remains are odourless and free from any contaminating pathogens. The time it takes for the faeces to decompose depends on the climate: a warm temperature with access to oxygen will speed up the process. The workers of Sulabh International harvested these remains and transformed them into a strong material by mixing them with Fevicol. The mix was poured into large wooden casts to dry, and is now on display in London with each 'module' standing in the cast that formed it.

Sulabh International takes the recycled waste a step farther. "Sulabh researchers are trying to make furniture and sculptures out of human excreta. Since it is a novel concept, its marketing options have to be worked out," says Anita Jha, the senior vice-president of the organization. But will people accept it? Delhi-based interior designer Pradeep Sachdeva does not think so. Acceptance is difficult, though the concept can save wood, he says. Jack Sim, the founder of the Work Toilet Organization, a Singapore group involved in sanitation issues, however, is excited. "I'd be interested in the properties of this new product and its applications in the furniture industry," he says. Culture takes time to change, says Pathak, adding that Santiago's work has also helped sensitize people to sanitation.

Sierra is not the first artist to showcase what society most reveres and what it systematically rejects. In 1917 mixed media artist Marcel Duchamp signed his name on a urinal and submitted it to the Society of Independent Artists' exhibition. Italian artist Piero Manzoni went a step further in 1961, when he produced 90 tins labelled 'Artist's Shit', each supposedly containing 30 grammes of it. 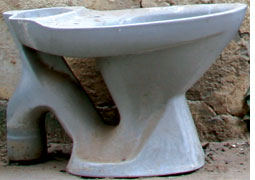 In using faecal matter as the primary material in a work of art, Sierra challenges the very notion of waste with optimism. If we change our ideas about the stuff we discard, learning to revere rather than to reject, we will gain a wealth of renewable resources and make a stand against social oppression.

With inputs from R K Srinivasan