One man's battle to save a village economy 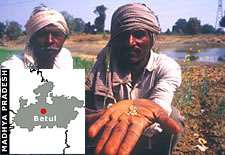 When residents of Mansingpura village in Madhya Pradesh's (mp) Betul district successfully cultivated wheat in the year 1996, it was the grand finale of their water conservation efforts. Thanks to the Rajiv Gandhi Watershed Development Mission, the village's groundwater level rose by over 30 feet. The mission was started by the mp government to conserve soil and water resources.

This initiative changed the face of the village. For the first time Mansingpura residents had cultivated wheat. Significantly, in 1996 the village also did not witness any migration. In 2001, Mansingpura became a rare village in drought-stricken mp to harvest a second crop. The village's estimated income was close to Rs one lakh.

However, the newfound bliss did not last. The scheme was withdrawn. It truly seemed the end of Mansingpura's sudden windfall. Left with no option the villagers started migrating.

Here was born the struggle of a man to bring the village economy back on track. Rati Ram Kasde, a member of the watershed development committee, vowed to fight against the circumstances. Unlike others, Kasde decided not to migrate. Instead, he took up wheat cultivation. "For me, wheat is a symbol of our village's success in water conservation," says Kasde. He managed to secure Rs 30,000 from the village panchayat to desilt and deepen the pond. Kasde then asked the villagers to cultivate wheat around the pond, so that water could be used for irrigation.

This is only a small victory for Kasde who has umpteen challenges ahead. In a few months the pond would dry up. And Kasde's wheat crop would fail. The government has started construction work as part of drought relief in the nearby villages. The temptation to migrate to these villages is difficult for people to resist. In this scenario how would he convince people to stay in the village? "I will ask the government to start relief work in our village too. And to deepen the waterbodies so that we can capture more water next year," answers Kasde confidently. "But before that I have to save at least a small patch of our wheat crop to remind people of our success," he adds resolutely.