Thirty years on, it remains the only fossil of early humans found on the subcontinent 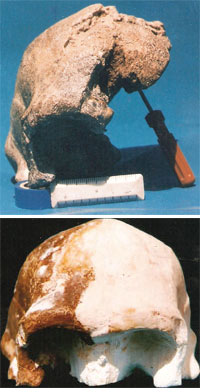 December 5, 1982. On the banks of the Narmada at Madhya Pradesh’s Hathnora village, geologist Arun Sonakia stumbled upon what turned out to be the most tantalising fossil discovery of a human ancestor. Narmada Human was the discovery of the century.

Kids in our schools learn about Java Man and Peking Man but hardly anyone knows about Narmada Human.

The discovery not only put India on the world fossil map, it proved the presence of early humans in the subcontinent and filled a void in our knowledge about human evolution, says D K Bhattacharya, former head of anthropology department at University of Delhi.

“The discovery opened a new chapter in terms of hard evidence of evolution in south Asia,” he says. “Unlike Africa, where stone tools were found along with human skeletons, all over India we were finding prehistoric stone tools, but there was no fossil evidence.”

Narmada Human, initially named Narmada Man, belongs to the category of Homo erectus, preceding Homo sapiens sapiens, the modern human species. Homo erectus are believed to have inhabited the planet 1.8 million to 200,000 years ago. “On the basis of associated fauna, palaeomagnetic dating studies by the Geological Survey of India (GSI) and morphological features compared with other fossils of known antiquity, the Narmada fossil could be 500,000 to 600,000 years old,” says Sonakia, now retired from GSI. The fossil could be of an individual aged between 25 and 30 years, he adds.

Antiquity of fossils has always been controversial. Some think the Narmada fossil may belong to the late Homo erectus category. Many believe the fossil could be of a female. “The evidence is not even a full skull. It is rather, a skull cap with a little bit of orbital roof,” says Bhattacharya. The finding has been scientifically analysed. “We think it represents a human form that had colonised India at least 400,000 years ago,” he adds.

Homo erectus had successfully adapted to savannah grasslands, says Bhattacharya. They had domesticated fire, did group hunting and used stone tools. In French Riviera, at a site called Terra Amata, there is evidence of an artificial hut with hearths—and even a footprint—believed to be the handiwork of Homo erectus from 400,000 years ago. Surely, one fossil can never tell the full story. So, why don’t we have more fossils from India?

In some regions presence of fossils depends on preservation conditions such as soil chemistry and erosion rates, says Parth Chauhan, research associate with US-based non-profit Stone Age Institute, and with the anthropology department at Indiana University, US. In other regions, either enough systematic survey has not been done or potential hominid fossil material has been overlooked. In India, palaeoanthropology or study of human origins is in a very neglected state, he says.

Developmental projects such as dams on the Narmada, mining and oil drilling activities, intensive agriculture and population pressure have taken a toll on fossil study. “Hundreds of palaeoanthropological and stone age sites are getting destroyed across the subcontinent,” says Chauhan.

Bhattacharya says India still follows the archaic 18th century mode of palaeontology. The country does not even have a national palaeontology institute. Guidance, experience and trained expertise are also lacking, says Chauhan. Palaeoanthropology is rarely practised in India in its pure form through multi-disciplinary approaches as in other regions such as Africa. Barring some exceptions, most studies in India have been non-system atic and not comprehensive, he says.

Society And History; … Features
SUPPORT US