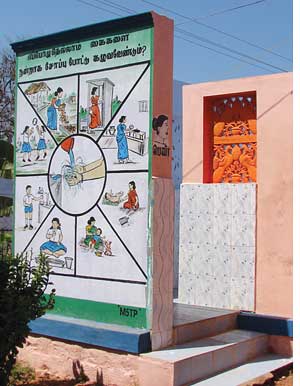 Mangalathammal remembers the day the village gathered in front of her house. The then secretary of rural development in Tamil Nadu, Shanta Sheela Nair, was also there. The year was 2005 and the subject of curiosity, a special toilet the sixtysomething had installed in her house the previous year. Its collection chamber had filled up. When the officer opened the chamber's lid people flinched away, fearing it would stink and insects would come out crawling. "But madam opened the chamber and scooped out dehydrated excreta with her hand," said M Mangalathammal. "My neighbours couldn't believe this and started moving towards the toilet to have a better look."

That was a turning point for Mangalathammal's village Kaliyapalayan, 40 km from Tiruchirapalli. Most people in this village of over 40 households used to defecate in the open.Today, 18 houses have built toilets like hers, and more are interested.

Kaliyapalayan's problem is peculiar. Since it is on the banks of the Cauvery, water is found there at shallow depths of less than two metres. Low water table means pit toilets, constructed under government's sanitation programme, do not work there. Water collected in the pit cannot percolate down because the soil is already saturated with water. Very few could afford Rs 30,000-40,000 to build a concrete septic tank, where water flows out into a drain instead of percolating down.

The land where people used to defecate--after crossing a channel and walking a kilometre--was purchased by a resident of the village in 2003. He objected to people defecating there. That's when villagers started looking for options. They heard about a new kind of toilet in a nearby village. It was constructed above the ground and cost much less (Rs 14,000) than septic tanks.

Seventy people from Kaliyapalayan in Musiri block went to see the toilet. It did not use water for flushing; the user had to throw a handful of ash down the hole in the toilet pan. The area for washing was separate, through which the urine and water collected in a separate chamber (see 'Collector's item', Down To Earth, November 16-30, 2008).

Ash not only absorbs the moisture in the excreta but also increases its alkalinity, thereby killing pathogens responsible for the foul odour, explained M Subburaman, the director of Tiruchirapalli-based ngo Society for Community Organisation and People's Education that developed the toilet in 2002. Dried and decomposed faeces are used as manure. The toilet is called ecosan, short for ecological sanitation, but people call it sambal, meaning ash in Tamil.

The villagers were impressed but hesitated because one had to shift within the toilet room for washing. Mangalathammal, however, decided to construct one. "Moving two-three feet inside a toilet room is easier than walking a kilometre to defecate. I had to hold my sari with one hand and my grandchild in the other to cross the channel. For me sambal toilet is the best," she said.

With technical help from the ngo, Mangalathammal constructed the toilet in her house. She uses the manure from the toilet in her kitchen garden and on a small piece of land where she grows paddy and grass for weaving mats. Even the stored urine is used as fertilizer.

After seeing Mangalathammal's toilet, her neighbour Latha Mahamani built one in her house. Mahamani's college-going daughter was not comfortable defecating in the open. "Initially, I thought of a septic tank but then I realized that disposing of sludge will not be easy. They charge Rs 1,000 for removal and it has to be done twice a year," she said.

Another person inspired by Mangalathammal is M Tavasi. 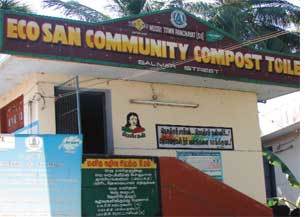 "Once the land we used to defecate in became out of bounds, I and my children started defecating in fields. We had to be careful of snakes, and villagers scolded us for defiling their fields," she said. Tavasi works on others' farms, so she gives away the manure to whoever wants it.

As more people started using ecosan toilets, the ngo evolved its model. "It was a learning process," said Subburaman. "Based on the feedback we've changed our design to a three-in-one model where faeces, urine and water flow in separate pipes, get treated and reused." The group has also reduced the size of the collection chamber, thus, bringing down the toilet cost to Rs 9,000. In 2004, nearby Sevanthilingapuram village also began building ecosan toilets. Now 246 houses there use them.


The news spread to Musiri town panchayat. It was finding it difficult to maintain public flush toilets for a population of 50,000. "Running a community toilet costs Rs 2 lakh a year. We have to pay for electricity, cleaning and disposal of sludge," said V C Sudhakar, the president of the town panchayat. The administration visited Kaliyapalayan and decided to build ecosan toilets at a community level in Musiri. The first toilet came up on Saliyur street in 2006. It cost Rs 8 lakh but needs little maintenance.

The toilet has separate blocks of seven rooms each for men and women. Said A Palanivel, in charge of maintenance "We provide a three-litre bucket to the user, whereas flushing requires 10 litres of water and frequent cleaning of manholes to prevent clogging." People get 10 paise per visit for using the toilet.

A Dhanabakiyam, 35, of Saliyur said people are getting used to the new toilet but it is not easy for small children to use. Another problem the community faced was the big size of cards issued to users. Amutha, caretaker of the toilet, said, "We reduced the size of the card after girls complained that boys teased them when they came out of homes with the cards. About 250 people use the toilet with a capacity for 400 users a day.

Decomposed faeces are yet to be collected from the Saliyur toilet, but urine and waste water are being reused. The waste water is filtered with sand and charcoal and used to dilute the urine. The diluted urine is transported to nearby paddy fields and banana plantations.

Two more community toilets in Musiri town have been converted to ecosan. Sudhakar said it is not possible to convert all the 18 community toilets in Musiri to ecosan, so the panchayat is trying other ways of saving maintenance costs. One alternative is to treat the waste. A community toilet near a solid waste dump yard was selected to implement this plan. Bengaluru-based non-profit borda provided technical help. Treated water from it is being used for moistening the dump yard waste, which is then sold as manure. The treatment is inexpensive since it involves natural anaerobic and aerobic processes, said project adviser V Ganapathy. The administration also installed a biogas plant to trap the gases produced during treatment. The trapped gas is supplied to households for cooking.

The Musiri administration is also promoting household-level ecosan toilets; 280 such toilets are in use. "We are planning 280 more by the end of this year so that the town's sewage does not pollute the river," said Sudhakar.

borda is using the waste water-treatment system in toilets in Tiruchirapalli city as well. "If this model is adopted in all community toilets in the city, its only source of water, the Cauvery, will be much cleaner," said Ganapathy. "The city has to learn from villages."