Look at the sun

Government has made half-baked efforts to promote solar pumps, a cost-effective irrigation tool

Look at the sun 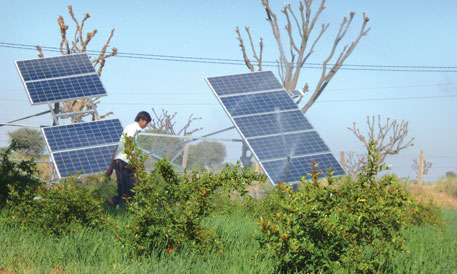 “Peter takes away all our money,” say farmers in Bihar, bristling with anger. They want to get rid of Peter but can’t. Peter is the diesel pump used widely in the state for irrigation due to power shortage. The three horse power (HP) pump consumes a litre of diesel (Rs 50) in an hour. Last year, the state government initiated a pilot offering an economical and sustainable alternative for free—solar-powered pumps. But its faulty implementation has marred hopes of eliminating noisy Peter.

Under the pilot, Bihar’s minor irrigation department, along with Delhi-based Claro Energy Pvt Ltd, has fitted 34 community tubewell pumps with solar panels in Nalanda district. As per the agreement, Claro maintains the pumps while the department looks after the underground water channel. A solar community pump (7.5 HP) caters to 20 to 30 fields.

By shifting to the solar pump from Peter, many residents of Gonkura village saved about Rs 50,000 last year. But the happiness was short-lived. Over the past five months, only few fields in Gonkura are receiving water. “PVC pipes that run from the pump through the fields have holes. Consequently, some fields get overflooded while some get less water,” says the pump caretaker. He cycled 13 km twenty times to lodge a complaint with the minor irrigation department, but to no avail.

Another problem is that some pipes do not reach the farmers. They run for 200 metres, while many fields are farther away. “This rabi season we may have to supplement irrigation with Peter,” rues a resident demanding quick repair and extension of pipes.

Farmers, meanwhile, point out that the pump had reduced their input cost considerably. “We have to pay only Rs 5 per kattha (1.33 hectares), per irrigation cycle to water fields,” says a resident of Gonkura.

An unsubsidised 3 HP solar pump (worth Rs 4.5 lakh) has negligible recurring cost, while a diesel pump (Rs 70,000), assuming it runs five hours a day, has an annual recurring cost of Rs 80,000. The cost of the solar pump can be recovered in four years, while for diesel the spending never ends.

When asked why the pilot was started if the pipelines were faulty, Kartik Wahi, CEO of Claro, said, “We were not aware of it.” Vidya Bhusan, assistant engineer (tubewell), state minor irrigation department, says the authority is aware of the situation. “The project is an experiment. We are planning to overhaul the water channels.” 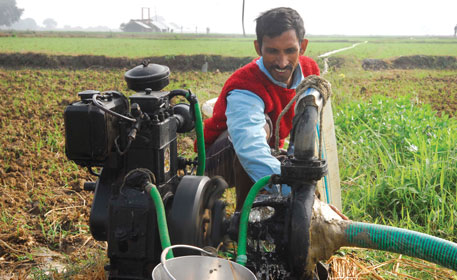 Avinash Kishore, a senior fellow at the International Food Policy Research Institute in Delhi, says solar pumps have a massive potential in states like Bihar, Jharkhand and West Bengal where groundwater is enough. “These states practise less irrigation because of power shortage. They mostly cultivate kharif and rabi crops. The pump can help farmers grow summer and cash crops, and save money,” adds Kishore, who has written a paper on solar-powered pump irrigation and India’s groundwater economy. But the pilot project’s poor implementation has limited the potential of the solar pump, he adds. The state auditor general, in a 2008 report, states: “Almost all underground distribution system of tubewells were partially damaged due to substandard work of laying of pipes.”

On the one hand, the state is promoting clean energy and on the other, it is giving 30 per cent subsidy on diesel. This may prevent people from buying solar pumps in the future. Diesel cannot be done away with immediately, says a state government official requesting anonymity. “The disbursement of the subsidy has been patchy. As a result, farmers are buying diesel at market price,” points out Kishore.

Despite water scarcity, Rajasthan is actively pushing for solar pumps. Its horticulture department provides 86 per cent subsidy on pumps, while the rest is borne by the farmer. Till date the department has installed 1,725 pumps, and plans 3,000 more this year. There are certain conditions for selecting the beneficiary: those who practise horticulture on a minimum of 0.5 hectare (ha), have tubewells or farm ponds (diggis) to store rain or canal water, and drip irrigation system. “These conditions may limit the use of pumps,” believes Nidhi Tewari, policy researcher with International Water Management Institute (IWMI). Less than 10 per cent of farmers in Rajasthan practise horticulture and fewer have the drip. “Many farmers are not even aware of solar pumps and government makes no effort to reach them,” says Ajay Jakhar, president of Bharat Krishak Samaj. Kishan Das of 15 Z village in Sri Ganganagar is one of them. He grows mustard and wheat on his small farm. “For irrigation I use water from the Indira Gandhi Canal, but the supply is decreasing. Earlier, water was released weekly, but now it is done fortnightly,” says Das who neither has a diggi nor the drip system. 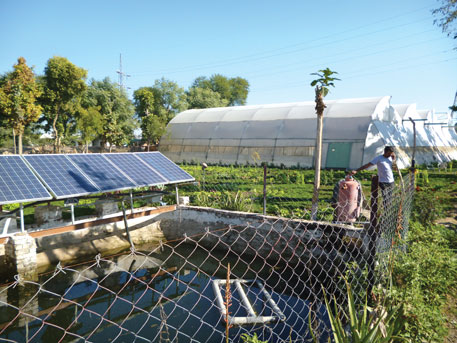 According to the horticulture department, the solar pump is meant “only for progressive farming and promotion of cash crops and water saving.” Rajendra Singh Khichar, agriculture research officer at the Directorate of Horticulture in Rajasthan, says, “What is wrong if solar pumps encourage farmers to invest in drip irrigation and diggi?” The state in addition provides 90 per cent subsidy on drip irrigation and 50 per cent on diggis.

Kishore contends that linking drip irrigation system with solar pump may not ensure its use. “Many farmers buy the drip to get the pumps but do not use it. They use the pump for running sprinklers which is a less water-efficient technique.” In some areas where water table is low, farmers use high-capacity motors. “Solar pumps should not be promoted in such areas because when farmers get free energy, they over exploit groundwater,” says Kishore. “Irregular power and high diesel cost actually deter exploitation of groundwater in these areas,” he adds.

Besides water availability, the demand for solar pumps is also guided by cropping seasons. In states like Uttar Pradesh, Bihar and Madhya Pradesh, where 80 per cent of energy demand is in winters, the use of solar pumps will remain restricted due to cloud cover or fog, points out Jakhar. “Solar has its limitations, but low water discharge is sufficient during winters as requirement is less,” says Wahi of Claro. In such a situation, diesel could be used to supplement irrigation, adds Kishore.

The biggest hurdle in widening the use of the solar pump is its cost. A 3 HP solar pump costs Rs 4.80 lakh. Even after subsidy, the amount the beneficiary has to pay, as in the case of Rajasthan, is high. “High capital subsidy is difficult to sustain. It leads to gold plating of appliances by companies to increase margins and cost remains high,” says Kishore. In many cases, the government does not disburse the subsidy amount to the companies on time, adds Amarjeet, vice-president of Claro. “We have raised money from unsecured loan sources on high rates of interest which is piling up.”

It is due to such reasons many entrepreneurs are exploring other financing models. Claro is in talks with NABARD to work out a financing mechanism. The banking sector, however, is reluctant because of lack of experience in the field. “Some past experiments with renewables have failed because of high default rate. This affects the bank’s portfolio,” says an official of a rural bank requesting anonymity. Farmers say defaults happen because their income is seasonal and insufficient. “Solar pumps have an advantage. Their use is linked to increase in farm income which will help people pay installments. Banks need to show confidence for such projects to take off,” says Wahi.

In April last year, Bihar’s minor irrigation department rejected NABARD’s proposal of connecting tubewells with solar, saying the technology is costly. Lack of economic options for farmers is fuelling the growth of new players that provide solar pumps at low costs. Take for instance Navneet Sharma in Rajasthan’s Bikaner district. He sells a 3 HP pump at Rs 1.60 lakh which includes the cost of four batteries for power backup, something the state government-empanelled companies do not cover. Seeing such low cost options, a farmer in Sri Ganganagar has filed a public-interest petition in the Rajasthan High Court against the empanelled companies for selling expensive pumps. Sharma has till now installed 30 pumps. While farmers using his pumps have reported no problems, some companies have raised questions regarding product quality.

Sharma says, “We cannot afford to supply substandard material because we operate in a local market. We procure material from the place others do. It is just that we bargain, ensure timely payment and do not have incremental costs of standardisation.” Like empanelled companies, Sharma also gives 25 years of warranty. He asks, “What is the guarantee of the quality of solar equipment supplied by the empanelled companies?” An empanelled company has to send its products for testing to the lab of the Ministry of New and Renewable Energy. “These companies send the best product to get the approval. What is actually installed could be substandard,” says Krishna Bhambhoo, a dealer of Waaree, a solar panel manufacturer, in Rajasthan. “There are no local testing facilities. The verifying team generally sees if the pump is running,” says Tewari of IWMI. Khichar, however, defends that quality cannot be compromised as there are quality inspections before the despatch and installation of the material.

It is often argued that solar pumps may find it difficult to gain ground in areas where subsidised electricity is in good supply. But experts say this is a rarity in most parts of the country. They advocate use of solar pumps although they are expensive because the installation cost of the grid is high.

According to the Rajasthan horticulture department, an investment of Rs 700 crore in solar pumps can save installation cost of 70,000 farm connections. And farmers can recover the cost of the pump within a year or so. A major reason behind the promotion of solar pumps is poor financial health of state discoms and a long pending list of farm connections. “The hours of power supply are also limited,” says Tewari. In Bihar, however, use of solar pumps may face competition from electric pumps. Last year, the state announced the Bihar Agriculture Road Map under which a separate 1,500 MW power grid will be set up exclusively for agriculture. This makes the state’s stand on clean energy confusing.