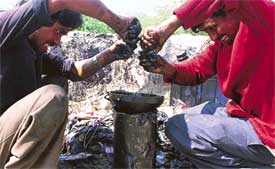 It's 7 am. T here is little traffic on the usually busy highway that bestrides the Noida Industrial Area, on the outskirts of Delhi. A dark, frail person in a grimy shirt walks towards a drain; he has a jerry can in his hand. This is Ramkaran, originally from Mau-Aimma village near Allahabad, Uttar Pradesh, and now a resident of a slum near Sarita Vihar, New Delhi. This 32-year old belongs to a work force of nearly 10,000 who scan drains for oil. The members of this sorry brigade can be identified quite easily by their trademark jerry cans that jangle along on both sides of their bicycles as they pedal towards drains near industrial areas: Sahibabad, Noida, Ghaziabad and Gurgaon on the outskirts of Delhi -- and Okhla within the city. Factories here produce humongous amounts of waste oil that flow in open drains -- a lot of it reaches the river Yamuna.

"Look, you can see oil floating in the drain," says Ram Karan. He throws a little pebble into the drain, which makes a small ripple on the oil surface, revealing the dark gray mucky water below.

The operation is conducted with much stealth. Ramkaran had initially been very cagey in allowing us to witness it. The reason became evident now. "The factory owners say we steal oil." "Steal whose oil?" we ask him. A little surprised, he replies, "The oil belongs to the factory it comes from". Ramkaran does not know that industrial units are not supposed to let waste oil flow through drains; they are supposed to treat it in effluent treatment plants.

By the time Ramkaran has finished voicing his fears, five friends of his have gathered near the drain. Cotton sarees are thrown into the water; the six wait till the garments are soaked in oil. They then strain out the muck from the sarees and rinse the oil into the jerry cans. "It takes two days to fill up a 40-litre can," Ramkaran informs. The oil is to be bought by a collector called Babuji, he would pay the collectors Rs 6 per litre for it. This means a daily earning of Rs 120.

Of course, all this only happens when there is business. "There is no guarantee that oil would be available in drains, the summer months are particularly lean," Ramkaran says wistfully. "Then we join mobil-oil-gatherers and collect oil from small auto repair shops and factories," adds another oil collector.

Collecting mobil-oil is a more paying proposition. "We can sell a litre at Rs 8-Rs 14 a litre, depending on the quality," Ramkaran informs me ."The rates are usually decided by the contractors, who mark out territories between them. We have little say in that. We cannot also sell oil to a contractor of our choice," rues the oil collector.

The business is resolutely kin-dominated. Five-years ago, when crop failures and unemployment pushed Ramkaran out of his village, he found help from relatives who collect oil from Delhi's industrial sludge. He does not yet have a network to give him a toehold in mobil-oil collection (see box: The more paying oil). So, he has to rest content with the less paying proposition. And, whenever there is oil in drains Ramkaran's eager network get into their act. In fact, many of them even have mobiles that help them inform each other quickly.

Who does he sell the drain oil? Can we meet the contractor who buys off Ramkaran's oil? The oil collector refuses us outright; the deals have to be kept secret for Babuji -- the contractor, who was coming the next day to buy the oil -- does not like outsiders snooping about the business. After much persuasion, Ramkaran allows us to witness the transaction -- but on the condition that we do not make ourselves visible to the contractor.

We arrive at the appointed hour, pushing our way past people, dogs and cows in a narrow winding Sarita Vihar lane that finally leads to Ramkaran's decrepit hovel. He gestures me to hide in a corner.

Babuji arrives a few minutes later -- a fierce looking man with a permanent scowl. Ramkaran and his friends have three drums of oil ready -- the product of their month's work. The contractor checks its quality and orders Ramkailash -- Ramkaran's friend -- to get a stove. The heater would be used to burn off any water in the oil. The order elicits a murmur of protest from the oil collectors: the oil has already been cleansed of all water, they reason. But Babuji would take none of these arguments: he checks the water content and the oil quality meticulously. It takes three hours for the contractor to be completely satisfied. All the while, he makes the oil collectors run various errands.

The oil is finally measured: the contract reckons it is 640 litres; Ramkaran and his friends protest again: the product of their month's toil is nothing less than 670 litres, they implore. But the pleas have little impact on Babuji, who goes on to make another huge cut in the revised figure: the oil has been diluted by 10 litres of water, he contends. The oil collectors wouldn't get anything more than Rs 5,582, he says with a peremptory shake of head. Having forced the deal on the hapless oil collectors, Babuji bids them goodbye. Ramkaran and his friends distribute the amount amongst themselves -- each gets less than Rs 1,000.


Waste oil is a hazardous waste. It is classified as such by the Hazardous Wastes (Management and Handling) Rules, 1989. In the year 2000, the Union ministry of environment and forests made registration mandatory for all units that recycle oil. The process then depended on the use of acid clay or modified clay technologies. But problems remained: there were no facilities to dispose off acidic sludge without harming the environment. The rules were amended again, through a notification issued on May 20, 2003. The new strictures required all the recycling units to switch over, within six months, to more environmentally-benign technologies such as vacuum distillation, hydro treatment or thin film evaporation process. Most units did not comply. Twenty-seven ought more time and agreed to switch over to cleaner technology by January 1, 2005. They gave a bank guarantee of Rs 5 lakh each to the Central Pollution Control Board (cpcb). But when the cpcb assessed the status of these units, early this year, they found that nine of them had gone back on their word. Their guarantees were forfeited.

Of course, the cpcb could take this action because the offending units were registered. Those that are the preserve of contractors such as Babuji run illegally and under no threat from pollution control agencies. At the same time, Ramkaran and his compatriots remain at the mercy of contractors, all for a paltry average monthly earning of Rs 1,400-Rs 1,500 (Rs 1,000 or so from drain oil and about Rs 500 from mobil oil). Very few have given thought to the fact that the oil collectors are a vital support that helps Delhi clean its 'waste oil'.