Loss of the wild

Greed has taken a heavy toll on the wealth of herbs in India. Manufacturers of herbal products are cutting the very branch on which the industry is perched

Loss of the wild 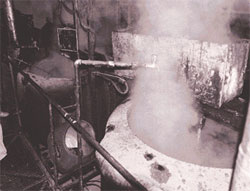 the heavy demand on plant resources has led to rapid depletion of populations. Some medicinal plants are now endangered. A recent report of the ministry of environment and forests (Medicinal plants of India: Guidelines for national policy and conservation programmes) acknowledges that medicinal plants are under serious threat due to habitat degradation, loss and over-extraction. The gap between demand and supply is increasing progressively. In 1987, for instance, the ministry of health estimated that the demand for Picrorhiza kurrooa (or kutki , used to treat liver diseases) was 5,000 tonnes, while that for Gentiana kurrooa (gentian, used in treatment of digestive disorders and as a tonic) was around 100 tonnes.

According to the World Bank, 96 per cent of the herbs used in commercially available preparations are collected from the wild. A number of herbs and medicinal plants can be cultivated for commercial use, but there is little effort on the part of the industry in this direction. Of the 400-odd plant species used, less than 20 are being commercially cultivated.

Herbs are supplied by traders, who buy it mainly from people in tribal or rural areas at cheap prices. Along the distribution chain, the herbs and plant products become costlier. Adulteration is common. Sanjay Aggarwal of the Delhi-based company National Herbs laments that there is no quality control on herbs available in Indian markets. "You are not sure of what you are consuming."

At the same time, the people -- farmers and tribals -- have been alienated from the resource. The ban on collection of forest products by the department of forests in various states has not helped. Trade still thrives. Since it is difficult to establish that a herb has been collected from the wild, rare and endangered medicinal plants are being sold. Some manufacturers claim that they cultivate the herbs that they use in their preparations. Even if these claims could be substantiated, the majority of manufacturers still depend on the open market for raw material. Since the people who collect these herbs profit the least for their efforts, collection continues at a rapacious pace. Moreover, the collection process usually involves destructive harvesting or uprooting of whole plants. As a result, there is a serious threat to India's genetic wealth of medicinal plants (see box: Neglected resources ).

"There is an urgent need for regulation of trade in medicinal plants in India. We are losing precious herbs," says Roy Chaudhary.

Though a ban has been imposed on export of 54 plants and plant products, little has been done to implement it.


Banning sale of herbal products or trade in medicinal plants, in fact, does little to protect the resource. The Supreme Court pointed out in a recent judgement (Pratap Pharma vs Union of India) that the government cannot impose an ad hoc ban on ayurvedic and other herbal medicines. Before banning a traditional medicine, the authorities should investigate the case and establish that chemicals not allowed under the category have been used in the product.

This task should be assigned to an expert body, set up under the provisions of the Drugs and Cosmetics Act -- in this case the Ayurveda, Siddha and Unani Drugs Technical Advisory Board (asudtab). The apex court also directed that asudtab examine and certify whether ayurvedic and unani medicines are meeting standards.

The ban on export of some herbs, which may be extended to other medicinal plants, has been dubbed ad hoc by the industry. According to industrialists, the export makes up for import of plant products to meet domestic demand. Says National Herbs' Aggarwal: "Bamboo camphor is mostly imported from Indonesia. But it costs Rs 2,500 per kg while the domestic product is available for Rs 20. But to meet demand and to ensure quality, manufacturers frequently have to buy the imported product."


Scientist at the National Institute of Science, Technology and Development Studies (nistads) Anuradha Singh points out that there is no data bank on plants used in various Indian systems of medicine (ism). "There is no reliable information on how many people depend on these systems, the number of local practitioners, their areas of specialisation, diagnostic strengths and other such aspects," says Singh (see box: Endangered traditions ).

The need for good clinical studies and scientific research is another matter of great concern. Though people continue to buy herbal medicines, there is a growing concern about the side-effects of ayurvedic products. "Ayurveda will have to adapt to modern standards to sustain itself," says a trader. "Quality control, adequate research and development and manufacturing facilities are essential."

"Authentic ayurvedic medicines are far better than those available in the market. But these are hardly obtainable," says HakimLari. "But how can manufacturers be expected to deliver the goods when the government does not provide adequate facilities for research? Look at this college. It is poorly staffed. They treat us as second-class physicians," he laments.