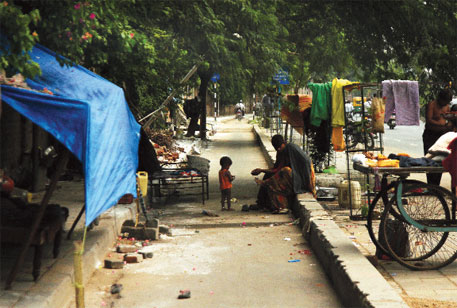 When the bus rapid transit system (BRTS) was conceptualised for Ahmedabad in 2007, a social marketing campaign was run. It advertised that Ahmedabad Janmarg would be constructed on the lines of the BRTS in Bogota, Colombia. The promise was that the city would be transformed with walkways, bicycle routes and colourful public plazas. While mayor Enrique Penalosa’s model made Bogota BRTS an example in wise planning, Ahmedabad remains a shoddy imitation. What’s more, authorities have now decided to do away with bicycle lanes in upcoming BRT corridors.

Ahmedabad Janmarg Limited (AJL), which is a subsidiary of Ahmedabad Municipal Corporation (AMC) and operates the BRTS, has decided that future corridors would not have any physical barriers to separate cycle lanes from the main carriageway; only a graphic demarcation would be present. “The road space for the new BRT corridors is only 24-30m. We cannot give space exclusively for cycles as the width of the bus lane cannot be compromised for cycle tracks. Cyclists would have to travel along with the main traffic,” says Utpal Padia, executive director of AJL. Up on being asked whether the roads would have any traffic-calming measures or speed limits for the safety of cyclists and pedestrians, he said there is no such proposal.

Over 30 per cent of the people in Ahmedabad either walk or use bicycles to commute but the city lacks adequate non-motorised infrastructure. Cyclists and pedestrians are provided with few facilities, road space and safety provisions. What little facilities are available, are poorly maintained. “This shows sheer ignorance and disregard on the part of the authorities for cycle users and walkers,” says Anuj Malhotra, chief executive officer at the Centre for Green Mobility, an Ahmedabad-based NGO that provides innovative mobility solutions.

A study on BRTS in India by Darshini Mahadevia, dean of the school of planning and public policy at the Centre for Environment Planning and Technology (CEPT) University in Ahmedabad, shows that Ahmedabad BRTS stretches for 78 km but only 26.2 per cent of the network has cycle tracks. Out of these not all are fit for use—only 65 per cent of the cycle tracks are free of open manholes and storm water drains, encroachments and potholes. Similarly, while 83.7 per cent of the BRTS has footpaths, only half of them are unobstructed and open for use by pedestrians.

In absence of a proper infrastructure that supports non-motorised transport, cyclists and pedestrians are forced to use motor carriageways. This can turn life-threatening at times—a 2007 study revealed that 20 per cent of road accidents in Ahmedabad involved pedestrians. Factors like narrow, non-continuous cycle tracks, open manholes, encroachments and two-wheelers plying on cycle lanes, discourage bicycle riders from using these tracks. “Then the authorities say cycle tracks are not needed as no one is using the existing ones,” says Rutul Joshi, a professor at the faculty of planning and public policy at CEPT University.

Provisions for non-motorised vehicles in road plans aid all commuters by allocating space for different modes depending on speed. But absence of a plan to integrate cycling and walking with BRT is leading to a decline in non-motorised transport, the most clean, efficient and healthy way of commuting. This also reduces affordable access to public transport. Joshi says there has to be comprehensive thinking and planning when it comes to lanes for walking and cycling as they provide last mile connectivity for many people. “The non-motorised infrastructure cannot be built just on specific BRTS corridors, there has to be a proper network,” adds Joshi.

AMC is planning to build 34 new flyovers across the city to cut traffic woes. Is Ahmedabad going the sustainable way?