Employment Guarantee Scheme, first of its kind drought relief scheme has had no impact on the drought-prone areas of Maharashtra in almost 30 years because it has failed to involve people in managing rural assets 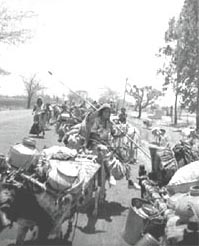 The Employment Guarantee Scheme ( egs ) of Maharashtra is said to be the only one in the world that guarantees employment on demand. This was for the first time an employment generation programme was conceived to create productive works at the village level. The absence of social institutions at the village level to manage infrastructure like water harvesting structures built under egs now threatens the scheme's effectiveness. "It is now necessary to evaluate the programme," says Ashok Basak, secretary to the state's planning board, which implements the programme.

"Whatever the reason, egs , as a development project, appears to have failed to engage the villagers' participation. Now, one may say that the major intention of egs has never been to promote people's participation in rural development," points out Roland Engkvist of the University of Lund in Sweden in his 1995 evaluation report of the scheme.

egs was launched to deal with the famine of 1972, as well as to uplift agriculture in the state that had a growth rate of 0.07 per cent in 1960-70. It was given statutory status in 1977 by the state assembly. egs now spends some Rs 500 crore annually, 50 per cent of it collected through six different taxes levied exclusively for the egs , and the rest is contributed by the state government. The government claims that the average daily unemployment rates in rural Maharashtra has declined from 7.20 per cent in 1977-78 to 3.17 per cent in 1987-88. But, the recent spate of malnutrition death of children in the six tribal districts belies this. The admission of the state tribal welfare minister that unemployment and the drought have been responsible for the deaths cast a shadow over the effectiveness of the programme. Sixty per cent of its employment generation is in six rain shadow districts in western part of Maharashtra.

Migration continues in these areas due to the wage disparity between egs and the basic minimum wage in the state. " egs continues with the assumption that state's social condition hasn't changed in the last three decades," says Vilasrao Salunke, managing trustee of the Gram Gaurav Pratisthan, Pune. There's been a constant decline in demand for jobs under egs . "The reason is that egs is no more a proposition for survival as sugarcane fields offer more money," says M H Suryanarayana, professor at the Indira Gandhi Institute of Development Research, Mumbai. "Because it did not involve the stakeholder directly in creating wealth, it became a failure," says Mohan Dharia, former deputy chairperson of the Planning Commission.

It is alleged that the programme prioritises only roads and buildings rather than productive assets like soil and water conservation structures. In the past 10 years, spending on irrigation and agriculture has decreased by 50 per cent while road construction has recorded a rise of around 40 per cent (see table: Wrong priorities ).

"As far as asset creation is concerned it is a successful programme. But going by sustainable asset creation, the programme is a major failure," says Salunke. More than 350,000 different works have been executed since 1973 but government statistics don't have any status report on these. "Over 8,000 tanks have been built but all of them are silted," says Salunke. " egs disbursed money but did not institutionalise the ownership of the communities," says A M Gokhle, additional secretary with Union ministry of environment and forest, who was deeply involved in jry .

Bimalendu Saran, district magistrate of Ahmednagar, one of the most drought-prone districts of the state, says a little reorientation in the programme will do magic. Without any institutional setting to monitor the structures created, maintenance totally rests with the district authorities. Also in many cases works remain incomplete due to non-attendance of labour. In Ahmednagar district itself, 209 roads have not been completed, though the work began almost a decade ago. "The pressure of maintaining works is so high that hardly 20 percent of the works can be monitored," admits Saran.