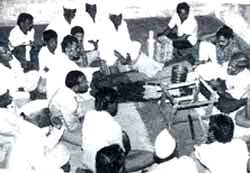 SUSTAINABLE development is a growing concern for many grassroots organisations, such as the Mukti Sangharsh Movement (MSM) in Sangli district in western Maharashtra. Over the last decade, MSM has involved peasants and labourers in developing scientific alternatives as part of its anti-drought movement, and more recently, in the Bali Raja Dam struggle.

MSM is currently focussing on agricultural degradation in the heavily irrigated, sugarcane, mono-crop areas in Sangli district, which is the citadel of the sugar cooperatives and the economic and political base of the rural elite. A 10-day Vigyan Yatra (Science Festival) was organised in October in collaboration with the Lok Vigyan Sangathan (LVS) in 10 villages in the Krishna river belt in Maharashtra. The central theme was sustainable agricultural development as an alternative to the highly external input-based strategy of the Green Revolution.

In the last three decades, though cooperative sugar factories have undoubtedly increased the farmers' incomes, sustainability of the sugarcane-based agro-industrial growth model has come under debate because water logging and salination have destroyed about 12,000 ha of prime agricultural land in the Krishna belt. Sugarcane productivity has declined from 120 tonnes/ha to 65 tonnes/ha. Despite high external inputs, productivity in terms of dry matter equivalent works out to just 6 kg/ha/mm, while in well-balanced ecosystems, the average reported productivity is about 25 kg/ha/mm.

Recent cuts in subsidies for inputs such as fertilisers has made agriculture an uneconomic proposition for most farmers. Increased dependence on directors of cooperatives, credit institutions and seed, fertiliser and pesticide companies, as also the sugar cooperatives, which have emerged as dens of corruption, have forced the masses to look for viable alternatives.

At the Vigyan Yatra, a slide show traced the historical development of mono-crop cultivation in the Krishna river belt and discussed its problems and possible alternatives. It was pointed out that sugarcane remained the most favoured crop because of three reasons: Well-developed processing and marketing facilities were available, prices were comparatively stable and most of the lift irrigation schemes, the area's main source of water, were controlled by the sugar factory owners.

Timing water-availability with cultivation methods was another constraint. Many farmers were unable to diversify as present irrigation rotations, once in 20-30 days, would at times stretch on to 40 days.

The slide show also displayed alternative irrigation and cultivation techniques such as pit sugarcane cultivation, which, in field trials, reduced water requirements by nearly two-thirds, improved soil quality and, by increasing productivity, lowered the area under sugarcane cultivation without reducing its total production. Thus, the remaining water and land remained free for a diversified cropping system under which cereals, pulses and oilseeds could be grown.

The Hutatma Kisan Ahir sugar factory, a model of scientific and democratic management, with the highest sugar recovery rate of 12.82 per cent in the area, was the focus of the second slide show.

This was followed by discussions on the innovative use of biomass-based materials such as timber, fibre, rice husk and sugarcane bagasse to acquaint villagers with alternative, decentralised, renewable energy-based, sustainable development paths as against the present fossil-fuel and sugarcane agro-industrial development. It was stressed that as biomass was the most efficient form of stored solar energy, plant-based materials can replace the fossil fuel base. Use of small pieces of timber in load bearing structures or in crib dams; non-woven natural fibre fabric in waterproofing, pipe lines and walls: and rice husk, ash or bagasse ash to strengthen cement were some of the possibilities named. These can reduce the use of steel, petroleum-based plastics and polythene and cement.

The spiral solar concentrator to generate heat and electricity, which was modelled on the Archimedes Spiral, proved to be a popular exhibit. Activists explained how the device could be used to generate electricity locally. LVS activist Advaid Pednekar felt the solar concentrator would concentrate enough solar energy to generate 1 KW electricity, enough for protective irrigation of four ha and to provide electricity to 16 families for their domestic needs. Solar energy, along with wood gasifiers, were enough to meet local energy requirements and reduce dependence on centralised power generation.

In a presentation on health, the Environmental Protection and Research Foundation (EPRF) in Sangli electronically analysed water samples brought by villagers, and showed them that the degree of hardness and concentration of solutes in their drinking water was much higher than prescribed levels.

Discussions on the Dunkel Draft, biodiversity and control over natural resources were placed in the every day context of the farmers' lives. While sessions on irrigation methods, unethical medical practices and women's health were well-attended, the session on scientific toys attracted hundreds of