MAHARASHTRA: Waiting for a cow to die

MAHARASHTRA: Waiting for a cow to die 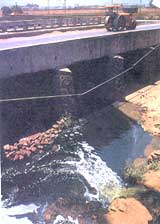 In Maharashtra, the dumping of toxic waste is no less brazen. It is a common practice in Bombay to dispose of industrial sludge along with municipal garbage. Associated Industrial Consultants (AIC), an environmental industrial consultant that studied the development of an environmental management strategy for Bombay, found that "none (of the industries) has provided (for) solid waste control facilities and their wastes are routinely co-disposed municipal refuse...Only a few industries have as yet sought consent for toxic and hazardous solid wastes discharge."

On the eastern shore of Thane Creek is the Thane-Belapur industrial area, where about 1,200 industrial units are housed on a 20-km stretch close to New Bombay. According to the Thane-Belapur Industrial Association (TBIA), goods worth Rs 4,000 crore a year are manufactured in this area, which also produces about 15 per cent of India's chemical output. But the Thane-Belapur belt, in addition, creates more than 100 tonnes of solid waste every day. TBIA sources say that about 85 per cent of this waste is acidic or alkaline in nature. The area also produces about 5 tonnes of waste daily, which is difficult to treat because of chemicals like halogens. About 3 tonnes of waste generated daily can be incinerated, but not treated. Says N Sadasivan, president of TBIA and formerly with the National Chemical Laboratory, "This also includes sludge that comes from effluent treatment plants in the area. This is mainly used for sanitary landfills, but industries dump their waste wherever they can." The bulk of the hazardous industrial waste seems to be thrown into municipal dumpyards, which are big and confusing enough to conceal the highly toxic waste.

"So far, it (toxic waste dumping) is not an issue," says S L Patil, secretary of TBIA. "It will become one only after a crow or cow dies of pollution." It is difficult not to echo his cynicism, given the ground realities in the area, which seems to be a disaster waiting to happen. Instead of attending to the issue, the priority for the Small-scale Industries Development Corp, which controls the area, is to develop a stretch of filled wasteland for a residential complex, separated from the industrial belt by only a highway. Many factory owners point out that it would be hazardous to settle people there as the soil used for the landfill has been taken from the spots where these factories have been dumping their waste. An indication of the scant concern is the fact that no chemical analysis of the soil has been carried out so far.

The state of the streams and drains in the area is no better. The Thane-Belapur belt has a number of open nullahs (drains) which carry frothy, coloured effluents right into Thane Creek. The effluents include very toxic substances from the dyes and dyestuff industries in the small-scale sector. Says Sadasivan: "The industries which use our common effluent treatment plant are supposed to carry out primary treatment first. But many of the small industries do not have facilities for this" (see boxToxic nightmare). Also, not all industries are affiliated to TBIA, which is mainly an association of big and medium industries. For the rest, waste disposal is a no-holds-barred guerrilla operation.

The situation in the other major industrial belts in Bombay is no better. The bulk of the industries are located in Thane-Belapur, Kalyan-Ulhas Nagar-Ambarnath, the western shore of Thane creek and around Patal Ganga river. The water bodies in the vicinity of all these estates are polluted. Says Patil: "The water of the Ulhas river has toxic contents and the sedimentation level of mercury and arsenic is also high." Ulhas river empties into the Thane Creek at its northern end. With the river water and the other nullahs that open into it, Thane Creek is one of the most polluted sea waters in the country.
Says G D Agarwal, former secretary to CPCB, "In scientific terms, the Thane Creek is dead." This is confirmed by the Department of Ocean Development (DOD) and the National Institute of Oceanography, which suggest that pollution in the Thane and Mahim creeks has reached perilous levels. Says the DOD report: "During the previous year (1992-93), the level of dissolved oxygen in Mahim and Thane creeks was almost nil during the low-tide period...The data collected on toxic heavy metals like cadmium and mercury revealed that their levels were high, as in the previous year. Sea-bed life (benthic population) in these areas remains very low, indicating that the pollution in the bottom layer, particularly in sediment, remains a matter of concern."

The depletion of oxygen is explained by the fact that metals in the sediment use it to get oxidised. Wastes from petrochemical and agrochemical industries include metals in organic form, explain DOD scientists. As a result, the fauna living in the overlying water column as well as the benthic population get choked. DOD scientists warn that the pollution is on the rise and if not checked soon, it may spread further offshore, snuffing out marine life. Not only do solid wastes get washed into the sea, but most effluent outlets do not extend beyond 500-1,000 metres offshore -- in stark violation of the Water Pollution (Prevention) Act 1974.