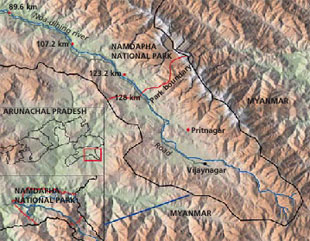 After 22 years, things appear to be moving at the Namdapha National Park in Changlang, Arunachal Pradesh. On January 20, 2006, the park management for the first time organised a meeting between the district administration, state forest officials, the Project Tiger director, and the Lisu , the dominant tribal community in the area. The meeting was long overdue because the Lisu face genuine land shortage but continue to be branded encroachers, as they migrate to the park to continue with wet rice cultivation, their major mode of subsistence.

The meeting was organised at the initiative of field director L K Pait and his staff. Ati Liakhu Yobin, the Lisu representative, presented the community's problems in a memorandum. They discussed the history of the area, problems related to land shortage, lack of road connection, and lack of healthcare, education and income opportunities with the officials.

The Lisu had two suggestions to make: either push back the park's boundary or resettle Nepalis inhabiting the area (Nepali families are economically better off, with better jobs and landholdings three times bigger than that of the Lisu); and give them more agricultural land in Vijaynagar circle. They also made it clear that they would not settle in areas near Miao, the traditional territory of other tribes (see: 'Fading fauna, forgotten people,' Down To Earth , September 15, 2005).

The area of Vijaynagar circle (637 sq kilometre) is classified as un-classed state forests, or community-owned forests. However, the availability of flat land and valleys below 1,500 metre is restricted to only 23 sq km. All cultivable land here is occupied by four Lisu and nine Nepali villages. The current total agricultural land holding (for wet rice cultivation) of the Lisu amounts to 375 hectare (ha), while land under cultivation by them in the park is 86 ha. Rough estimates indicate about 15-20 sq km of the park has been affected by partial clearing and settlements. Land requirement for 83 families residing inside the park (as enumerated by a joint survey conducted by the district administration and forest department) would amount to 166 ha (at 2 ha per family). A more realistic requirement would be 250 ha, factoring in low productivity, erosion and flooding problems.

At the meeting, Changlang DC Hage Butt ruled out the possibility of finding land in the Pritnagar area of Vijaynagar (see map), a suggestion made earlier by the administration. In October 2005, a survey by the administration had confirmed that there was only 30 ha of land in Pritnagar, already occupied by five Lisu and four Nepali families. He also acknowledged Lisu reluctance to relocate in Miao. He suggested looking for land in Vijaynagar circle, the Lisu traditional area. Compensation packages were also discussed. According to Butt, the land allotted to Nepali community belongs to the state government, and if the Nepalis were willing to resettle, the land would revert to the state and could be used for settling Lisu families, currently inside the park . He reiterated that a double compensation package for both Lisus and Nepalis should be provided by Project Tiger. He also suggested inclusion of an ngo representative in the committee be set up to identify land.

Acknowledging the problems of the Lisu, Project Tiger director Rajesh Gopal said that there would be no forced relocation but ruled out the possibility of reducing the park area, citing stringent wildlife laws and legal issues. He suggested that the Lisu consider the option of receiving 2 ha of agricultural land per family, over Rs 1 lakh rupees compensation and other facilities. He stressed that the forest department would undertake activities for the welfare of Lisu villages outside the park. He also addressed the need for restoring an old defunct road, but made it clear that it would be under the control of the forest department for regulated use.

Prior to the meeting, the Lisu had serious doubts over the outcome of the meeting and in the words of Phusa Yobin, a Lisu leader, "The forest authorities have left us with no option but to suggest that our Nepali brothers be moved out." But now, it appears that the Lisu will benefit if the promises made by the government at the meeting are honoured. Lisus should, hopefully, receive good agricultural land and fair compensation, so that they can carry on with their wet rice cultivation and not be branded as 'foreigners from Myanmar' anymore.