Our houses gobble up energy and spew out carbon dioxide. Shocking, but true. Buildings, primarily residential and commercial facilities, are responsible for approximately 35 per cent of US greenhouse gas emissions. Ventilation and insulation are not given adequate emphasis in urban layouts. Consequently, urban sprawls manage to use more energy for air conditioning and warming. The result is 'heat islands', characterised by temperatures higher than that of the surrounding areas 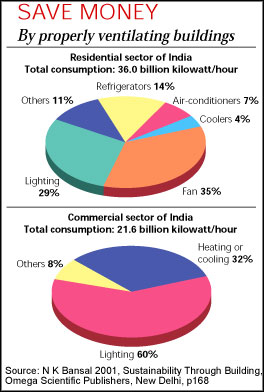 Our houses gobble up energy and spew out carbon dioxide. Shocking, but true. Buildings, primarily residential and commercial facilities, are responsible for approximately 35 per cent of us greenhouse gas (ghg) emissions. Ventilation and insulation are not given adequate emphasis in urban layouts. Consequently, urban sprawls manage to use more energy for air conditioning and warming. The result is 'heat islands', characterised by temperatures higher than that of the surrounding areas.

The European Commission's polis research programme arrived at exactly the same conclusion. Between April 2000 to March 2002, the polis team installed 35 temperature stations all over Athens. Ambient temperature was measured on an hour-to-hour basis.

The Bureau of Energy Efficiency proposes to hire 'energy saving companies' (escos) to make the buildings energy efficient. escos make all the investments for upgrading and recover both cost and profits from the money saved due to reduced electricity consumption. This ensures that the upgradation is effective. The companies also train the building staff to maintain the standards. It takes a company three to five years to recover its cost.

It is even more easy to make a new building energy-efficient. The Himachal Pradesh State Co-operative Bank is a good example. This multi-storeyed rcc (reinforced concrete cement) structure is located in Shimla. The most striking feature of the building is that the walls of balconies (adjacent to workspaces) are covered with glazed windows. Due to this, the balconies act as heat collectors, reduce glare and also liven up the main faade. Monitoring of the building shows an annual saving of about Rs 200,000 during one heating season.


But this is a rare example. "The market is very limited, both in terms of architects and consumers," says Ravindran, adding, "Energy-efficiency is given little more than lip service in the architecture curriculum." Besides, architects are not bothered about the concept because it affects neither their profits nor operations, says R K Safaya, chief (design and development), Housing and Urban Development Corporation Limited (hudco), New Delhi.

Architects assert that it is difficult to convince consumers in an immature market like India. "The best way to make a new building energy-efficient is to generate computer simulation for a cost-benefit analysis. This requires both time and money, which architects lack," says Tanmay Thathagat, senior programme manager of International Institute of Energy Conservation, a Washington dc-based non-governmental organisation.

However, if the architects persist and consumers listen, they could work wonders. The Torrent Research Centre in Ahmedabad is proof of this. It is a complex of pharmaceutical research laboratories. The 12-hectare site is located in the vicinity of major institutional buildings. The most striking feature of the building is the use of pdec (passive downdraft evaporative cooling) system to minimise the use of conventional air-conditioning. In the pdec system, wind catchers (high-rising shafts) guide outside air over water-filled pots. This causes a significant drop in air temperature before it enters the interior. This system is particularly effective in hot and dry climates. For example, in 1997, when the ambient temperature of Ahmedabad was 43-44c, the temperature of Torrent Research Centre was 29-30c. "When the proposal was mooted we were very sceptical," director of Torrent Research Centre is reported to have said.

"The building industry should become socially responsible. All it requires is low-energy-intensive material and the right design. Right now a good design is what looks good. We have to redefine our definition of a good design," says Ravindran. Making buildings energy efficient should be made mandatory, asserts Safaya. "A legislation alone is not sufficient. Residential zones get converted into industrial zones. Discipline is required to make things better. The concept should be incorporated in the masterplan of a city. There should also be no political interference," he stresses.

Bansal opines that since it is difficult to convince consumers solely on the basis of a cost-benefit analysis, they should be given some financial incentives, such as tax exemption. Shekhar disagrees. "Why should the government provide financial incentives? It is the consumers who are going to benefit. Tax exemption is not a sustainable solution. We can only promote the market for energy-efficient products," he says. Ravindran, however, believes that by concentrating on the market, the government is only acting as a middleperson for investors.

Cost is the biggest disincentive. Consumers think in terms of traditional technologies, which are low cost. "Energy efficiency is not a new concept. Any good architect knows and uses the concept while designing. Low-cost energy-efficient solutions do exist," says Rajiv Kathpalia, director of Vastu-shilpa Foundation, Ahmedabad.

Thathagat disagrees. "Energy-efficient technology is expensive. We can no longer speak in terms of design elements alone. It is important to accept this. We can pick up the basic principles from traditional knowledge. But the real solutions will have to come from technology," he says. Ravindran opines the best way out is to introduce a system of energy audit, both for residential buildings as well as commercial buildings. This will help identify the extent of the problem. The next stage is willingness to take risks and bear upfront costs. Else, we will continue to face an unnecessary environmental problem.