People of the Arwari basin in Alwar, take proactive measures to battle drought 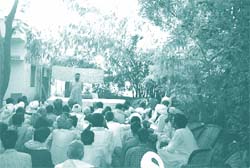 after having revived the Arvari rivulet through the sweat of their brow, the 70 villages in the rivulet's basin in Alwar district, Rajasthan, have gone one step ahead. They are taking proactive measures to deal with the third consecutive year of drought. This is being done through the Arvari Sansad, or the Arvari Parliament, which was formed in January 1999.

On October 2-3, 2000, the Arvari Parliament met in an emergency meeting in village Bhikampura to discuss the drought-like situation staring Rajasthan in the face and the measures required to mitigate the effects of consecutive monsoon failures. The Arvari Parliament was formed to manage the river and its waters after its flow became perennial in 1996. This was a result of the 70 villages building more than 200 johad s (earthen check dams that are based on age-old, time-tested principles of water management). The river had been reduced to a monsoonal drain for decades, while the region was reeling under chronic drought (see 'Waters of life', Down To Earth , Vol 7, No 20, March 15, 1999). The construction of johad s was encouraged and assisted by Tarun Bharat Sangh ( tbs ), a voluntary organisation that has been responsible for turning around the ecology and economy of the region through social mobilisation and a traditional approach to water management (see box: When people begin to manage natural resources ).
For the third year on a trot, it has rained less that normal during the monsoon in Rajasthan. "It rained for only two days during the last monsoon," informs Rajendra Singh, secretary of tbs . "Residents of the 70 villages want to ensure that when summer peaks in April and May of 2001, there is no water crisis that cannot be handled," he explains.

At the emergency meeting, a number of crucial decisions were taken as part of a comprehensive strategy to deal with drought. They included measures to use water carefully, taking crops that are not water intensive and can even do with little water, and launching a campaign to spread the word in all 70 villages on the steps that are needed. It was unanimously decided that each drop of water and each straw of fodder would be used judiciously. The parliament also decided to store fodder carefully. Another decision involved the selection of crops that are not water intensive and grow readily in arid conditions, such as mustard, barley and gram.

The people also decided to grow fodder crops like black sewan, which can grow in little water and provide the much-needed fodder to livestock. Much of the population here relies on livestock for not just the agricultural work but also for the additional nutrition that milk provides -- the milk cake of the area is quite famous.

To observe self-discipline while using the river water, the parliament decided that water shall not be lifted directly from the river through motors except by those who are landless. Under normal circumstances, the parliament had permitted direct lifting from the river through diesel pumps right up to the festival of Holi in March. This year, direct lifting of water was halted on October 7, which was the festival of Dushehra.

As part of measures to mobilise the people, a padyatra (foot march) was flagged off on October 2. It went from village to village, cautioning the residents about the trying times ahead and the methods to save their crops from the imminent water scarcity.

Among those who attended the meeting were students who had come to listen to the proceedings. G D Agarwal, former professor and head of the department of civil engineering at the Indian Institute of Technology, Kanpur, came away impressed. "It is amazing the way these communities have got totally involved in water harvesting and management. Their discipline in water use is amazing. This proves that the water crisis that India is facing can be easily overcome if communities take over the responsibility of managing water," he observed. Agarwal has been associated with the Arvari for a while now. He conducted a scientific evaluation of the johad s built by the villagers with the help of tbs . This showed that a johad is the best investment not only for the benefits that it brings but from the view of the cost-benefit analysis.

The lessons learned in Alwar are already spreading far and wide in the country and the idea of a river parliament is also attracting attention. Groups of villagers are coming from Andhra Pradesh, Gujarat, Madhya Pradesh, Maharashtra and Uttar Pradesh -- many of them on their own initiative. They meet the villagers and the parliament members to learn water resources management, informs Rajendra Singh.