Sustainable forest management is a concept hostage to many global players 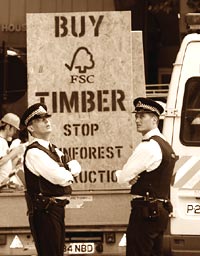 When national leaders from all over the world gathered at Rio de Janeiro, Brazil for Earth Summit, 1992, management and protection of the world's forests was among the most contentious issues on their agenda. Since then, the term sustainable forest management (sfm) has become a matter of multilateral bedlam. Simply put, the concept implies regulating use of world's forests in a way that they continue to provide resources required by the present generation without jeopardising needs of people over the long-term future.

However, this is easier said than done. Twelve years after Rio, the world is still struggling to find a acceptable definition of sfm. In fact, forebodings of difficulties to come were quite evident at the Earth Summit itself: after long rounds of deliberations -- with the industrialised world and the developing countries bitterly pitted against each other -- participants could come out with a only a broad set of non-binding principles for sfm. The principles were to serve as guidelines for a future definition. But when at a recent meet to negotiate the 1994 International Timber Agreement, Malaysia called for immediate negotiations to frame out such a definition, it was stalled by Nigeria and the us. The latter argued that it would be too early to straitjacket sfm into a definition for "it's still an evolving concept." There was some truth to this reasoning: after all, forest management is still an emerging discipline. But a more significant reason militates against a universally accepted definition: nations simply have far varied and conflicting interests when it comes to forests. For example, Indonesia and Brazil with strong interests in the timber trade vociferously oppose strict regulations against forest use. Moreover, regulating the timber industry has proved an immensely difficult proposition in the past. According to a recent research by the Royal Institute of International Affairs, London, nearly a tenth of the world's trade in timber (about us $150 million annually) is conducted illegally. And, close to 50 per cent timber derived from ecologically sensitive forests is harvested in breach of international and national laws of sustainability.
For millions of people in the Third World, forests mean livelihoods. According to the un Food and Agricultural Organization (fao), about 45 million hectares of forestland is likely to be converted to agriculture in Asia, Sub-Saharan Africa and Latin America by the year 2010. With the subsistence of many at stake, developing countries feel that regulating access to forests might prove counterproductive.

Devolving forest management to local communities can put this problem to rest. But administrative difficulties in developing countries very often bedevil such devolution. For example, India's Joint Forest Management (jfm) programme has clear goals to delegate land use rights from government-controlled forest departments (fd) to people at the village level; but a recent report of the Indian Institute of Forest Management, Bhopal shows that fd officials have been too reluctant to hand over responsibilities to local communities.
Meanwhile, sfm has also got sucked into the vortex of climate change negotiations. The reason: forests absorb carbon, the main cause of global warming. And developed countries want to turn this quality to their advantage: they have become ardent votaries of conserving forests in the developing world for that will offset the greenhouse gases released by their industries -- in fact, allow their luxury emissions to go unbridled.

There are other international players with stakes in forests: among them is the global pharmaceutical industry. The industry relies heavily on biodiversity of rainforests for new life saving compounds. 70 per cent of the anti-cancer plants identified by the us National Cancer Institute are found only in tropical rainforests, and 25 per cent of the pharmaceutical drugs used in Western medicine come from rain forests.

With sfm getting embroiled in numerous global parleys, getting to an accepted definition of the term has become much-complicated. Different international bodies and countries have their own definitions of the concept (see box: Messy verbiage). Things in fact got further vexed with the introduction of a new term at the un Convention of Biodiversity meet in the year 2000: the ecosystems approach. The concept views a forest as an ecological unit in itself. On paper this seems quite fine. After all, wildlife and other biodiversity as well as land and water resources are inextricably linked. And the concept also stresses decentralisation of forest management. But the ecosystems approach also de-emphasises the use of forest resources by local communities. Not surprisingly, the Third World is at loggerheads with the strongest supporter of the approach -- the eu.


While sfm has almost become a hostage to international treaties, the world's forest cover has fallen drastically --there has been a net 0.22 per cent average yearly depreciation in forests through the 1990s. The decline has been particularly sharp in developing nations (see table: Fast denuding).


However, the story of developing global yardsticks for managing forests is not altogether a negative one. At the 2003 conference on Criteria and Indicators -- held in Guatemala City, Guatemala -- a few thematic elements were added to the set of non-binding principles as universal essentials to achieve sfm. The basics now involve some appreciation of the role of forests as resource base for local communities, along with an understanding of their significance as biodiversity reserves. In fact, such appreciation has been a part of forest policies of many countries. New Zealand, for example, has a system in place where the revenues from state-owned plantations are held in trust by the government, until it identifies their rightful owners. India's jfm also lays store on local communities.

Besides the regulatory and policy pushes there are several other instruments to drive certain aspects of sfm. One such method is timber certification. The Forest Stewardship Council, an initiative led by the Worldwide Fund for Nature and non-governmental organisations such as Greenpeace and Friends of the Earth, is the leading international certifier of timber. The council grants certificates to timber companies after a thorough scrutiny of the ecological impacts of their practices; the effects of their activities on local communities is also reckoned before certification. There are other similar initiatives: these include the European industry-led Pan Europe Certification scheme and the us industry's Sustainable Forestry Initiative. While these might not be ideal methods to achieve sfm, they do end up setting some yardsticks for the purpose.


Moreover, some market-based instruments also drive sfm today. Among them are tradable emission credits, which have come into play after the Kyoto Protocol. These credits allow developing countries to make up for the pollution caused by developed countries by selling credits to the latter's industries. The system monetarily compensates countries for the benefits their forests provide for the world, while allocating the bill to industries responsible for pollution. However, this solution is quite a dubious one. For, it provides an easy escape route for developed countries to avoid pollution. Not surprisingly it is fraught with controversies.

Nonetheless, these measures do represent innovative solutions and have potential for refinement. These, along with the appropriate policy and regulatory framework, can make the concept of sfm a reality.