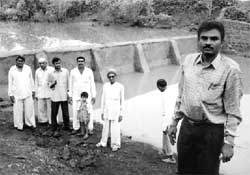 Concerned over the water level in the region of Suarashtra which had receeded from 15 metres in 1990 to 120-210 metres in 1998, Mansukh Bhai Suvagia, a 37-year-old government servant decided to initiate steps to tackle the problem.

Well-planned locations and building according to the requirements were the two main reasons for the low cost of construction. Cost was further reduced as the villagers built the dams themselves.

Suvagia's wife Rasila helped him out in his work by mobilisng the village women to get involved in the building of the dams. With the help of local women, four dams have been built in the area.

At present, in over 100 villages of Saurashtra region money is being raised to build dams. The amount of money collected ranges from Rs 1-5 lakh. Jamka village in Junagadh district is successfully carrying out the work of building check dams. The village is 1,011.7 hectares in area with a population of 3,000 and the area under cultivation is 809.4 hectares. Even though the area has one river and four rivulets, the water supply is inadequate. Moreover, with 1,200 bore wells the water level has gone down to 200 metres in the last 15 years. The villagers started constructing the dams in 1999 and so far, 51 check dams and two ponds have been built to harvest water. As a result, the water situation has improved and the farmers are able to cultivate kharif and rabi crops even during the drought conditions. Mansukhbhai projects the profit as around Rs 3 crore in the years of good rainfall. This includes money from agriculture, livestock and trees used for afforestation. "It puts the government in a very bad light," says Suvagia. He is all set to spread the message to the rest of Saurashtra and has already created awareness in about 500 villages. He feels that cse is doing a good job of spreading the message of self- help to other parts of the country.