In 2002, the Survey of India began a year-long programme which celebrated 200 years of the Great Trigonometrical Survey, a mammoth cross-country exercise the colonial government undertook in the nineteenth century to map the terrain of the (then) Indian subcontinent 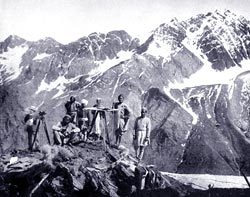 In 2002, the Survey of India began a year-long programme which celebrated 200 years of the Great Trigonometrical Survey (gts), a mammoth cross-country exercise the colonial government undertook in the nineteenth century to map the terrain of the (then) Indian subcontinent. A scientific endeavour that made perfect political and economic sense to the colonial government, the bicentennial celebrations of this event are currently on in the uk.

gts took 65 years to complete. It mapped the entire Indian subcontinent with "inch-perfect accuracy". The first-ever measurement of the tallest peak on earth -- Himalayan peak number xv, subsequently named Mount Everest after the celebrated British surveyor and explorer George Everest -- was an offshoot of this effort. Moreover, the project advanced scientific knowledge about the shape of the earth by determining the exact values for the curvature of the earth. (This was one of the great scientific questions in the 18th and 19th centuries. It was generally known that the earth was not a sphere but an oblate spheriod more curved near the Equator than at the poles.)

In 1799, Colonel William Lambton proposed a plan to the colonial government of "a mathematical and geographical survey" right across the peninsula using a method called "triangulation". In theory, triangulation was a simple procedure to know the distance between three mutually visible reference points. Starting with a baseline of two points, and measuring the angles using a surveyor's telescope (the theodolite), the position of the third point could be established. Each of the newly determined sides then became the baselines for two other triangulations. Thus, a chain of triangles could be built up.

gts converted the Great Arc of meridian into a string of continuous triangles extending from the Cape of Comorin in present-day Tamil Nadu to Mussoorie in present-day Uttaranchal state. Using this data as a kind of central stem, contingents of surveying teams branched out, covering the breadth of India. Some of the noted projects were Lambton's Peninsular Longitudinal (1803-1805), Everest's Bombay Longitudinal (1822-1823), Calcutta Longitudinal (1825-1831) and ne Longitudinal (1840-1850).

Each expedition was mammoth, including porters, carpenters, water carriers, messengers and interpreters. Sometimes the families of the surveyors went along. The theodolite -- the key instrument -- weighed about half a tonne and had to be carried by trained porters; the bumpy bullock-cart rides would have destroyed the sensitive instrument. At places that lacked landmarks, surveyors constructed temporary structures as tall as 30 metres high to use vantage reference points. Domes of mosques and spearing summits of temples also provided a foothold.

Though the Great Arc was proposed and conceived by Lambton -- he completed triangulation of a record 423,276 km -- contributions by his successors such as George Everest, Colonel Andrew Scott Waugh and Colonel Walker were also remarkable. The imperial rulers had enough reasons to support the project. The administration needed geographic information and small-scale maps, to better rule the country and exploit its now-mapped resources. This attitude is aptly captured in the memoirs of botanist and explorer Clement R Markham: "The story of the Great Trigonometrical Survey forms one of the proudest pages in the history of English domination in the east."

The intellectual contribution made by Indians to the project, too, is not minuscule. Radhanath Sikhdar, as Chief Computer, measured the height of Mount Everest in 1852. The peak had been observed from six different stations, but only Sikdar realised the import of the find when reading the observational data. Legend has it that Sikhdar went to the director of the survey (Scott) and told him: "Sir, we have discovered the highest mountain in the world."