Some countries have failed to live up to commitments. But measures to ensure compliance to the protocol do not address the issue of North-South inequality 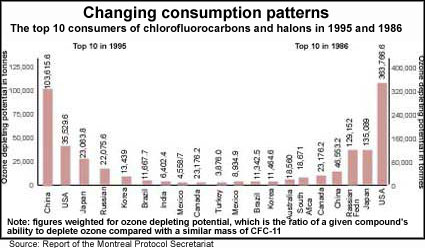 the agenda for the 9th Meeting of Parties to the Protocol (mop-9) included measures to ensure compliance, curb smuggling of cfc s, and phase out hcfc s, methyl bromide, methyl chloroform, carbon tetrachloride and other cfc substitutes with a high ozone depleting potential (odp). A number of decisions were taken at mop -9, but the issue of faster phase-out of hcfc s and cfc substitutes like hydrofluorocarbons (hfcs), which has been opposed by the us , was not resolved.

In a move to curb smuggling, the developed countries agreed to a total ban on sale of stockpiles of virgin cfcs, except to meet the "basic domestic needs" of developing countries and for certain "essential uses", exempted under the protocol. The meeting also agreed to establish licensing systems for trade in new, used, reclaimed or recycled substances and for banning trade with parties that do not establish such systems themselves. The system will be based on licences issued by parties for each import and export transaction and on regular information exchange between parties. This will enable customs and police officials to track international trade in cfcs and other controlled substances, and detect and discourage illegal sales. The system is to become effective from January 1, 2000. India has always opposed trade measures of this kind as they place tighter restrictions on exports from developing countries.

The proposals that were considered at the meeting inclu-ded control over export of equipment containing cfcs to signatory countries and improving customs codes to facilitate accurate identification of controlled substances. Together, these new trade provisions would help prevent illegal traffic in controlled substances. Proposals for prohibiting import of newly produced ods from parties that are not complying with the protocol and for controlling trade in methyl bromide with non-parties were also considered. The issue of new, unlisted substances that have lower but significant odp entering the market was also raised.

A number of "essential-use exemptions" were considered to allow certain parties to use small but vital quantities of parti-cular chemicals for medical, research, and other scientific purposes. The matter of non-compliance by Latvia, Lithuania, and the Russian Federation could not be resolved. Russia has seven factories which are producing cfcs illegally. It had asked for us $40-50 million to destroy these facilities, re-employ the wor-kers and set up factories to produce substitutes. This was watered down by the un to us $ 27 million. But, donor countries being reluctant, only us $ 15.5 million have been pledged so far by four countries. If the rest of the amount cannot be raised, these pledges, too, will lapse.


The European Commission (ec) and Switzerland had called for an accelerated phase-out schedule for hcfcs and for the introduction of production controls. They had proposed bringing forward the deadline for phasing out hcfc use for maintenance and servicing to 2008. The ec tried to persuade the us to support restrictions on the use of hcfc substitutes earlier than 2030. But the us maintained its stand, opposing faster phase-out of hcfcs and their substitutes. The ec and Switzerland, however, urged that the issue be taken up at a future meeting.

Both developed countries and developing nations agreed to change their targets for phase-out for methyl bromide, widely used as a soil fumigant or pesticide. Canada, the us and the European Union had submitted proposals requiring deve-loped countries to phase-out methyl bromide - production of which has touched 70,000 tonnes per year - by 2001, as against the previous target of 2010.The us and Canada had made a similar proposal at the 15th meeting of the Open Ended Working Group of the protocol at Nairobi in June 1997, but were opposed by the group of 77 developing countries (g-77). The g -77 said that a date could be fixed only after demonstration projects in their countries had been completed.

After amendments, the phase-out of methyl bromide by developed countries, previously set at 2010, has been brought forward to 2005. Interim reductions of 25 per cent have to be made by 1999, 50 per cent by 2001, and 70 per cent by 2003. However, the deadlines will be weakened by a proviso allowing them to continue using the chemical for "critical agricultural use". The interim reduction schedule will be reviewed in 2003.

Developing countries were previously only committed to freezing methyl bromide by 2002 at the 1995-98 average level, but did not have a deadline to begin phase-out. At mop -9, they agreed to a 20 per cent reduction on a four-year average - with 1995-98 as the base years - for calculating the phase-out. The Multilateral Fund would make available us $25 million per year in 1998 and 1999 for activities relating to the phase-out. This would be in addition to the us $10 million agreed last year for funding demonstration projects to test the feasibility of methyl bromide alternatives. A year after this part of the agreement comes into force, parties will ban trade in methyl bromide with non-parties.


Like other developing countries, which were insignificant consu-mers of cfcs till the 1980s, India is a signatory under Article 5 of the protocol. Article 5 allows countries whose annual per capita consumption of ods is less that 0.3 kg a time lag of 10 years to implement phase out use of such substances. In the past 10 years India, which signed the protocol in 1992, has become the seventh largest consumer of cfcs in the world (see graphs : Shared capacities and Changing consumption patterns). Its total consumption of ods in 1991 was estimated to be 10,300 metric tonnes (mt), while the per capita consumption was a mere 10 grammes. By 1995, though overall consumption had increased to approximately 17,000 mt, per capita consumption had remained stable. If unchecked, it is estimated that demand for ods in India may rise to 184,200 mt by 2010.

Of the eight types of substances listed in the Montreal Protocol under five annexures, India chiefly consumes those listed in Annexure A (cfc -11, cfc -12, cfc -113, Halon 1211, Halon 1301) and Annexure B (carbon tetrachloride, ctc , and methyl chloroform, mcf). There are five industrial sectors which consume cfcs and related chemicals, led by solvents processing, and refrigeration and air-conditioning (rac). Foams, aerosols and fire extinguishers make up the rest ( see graph : Different stakes). Although the solvents sector uses the most ods , it is the rac sector which has seen the biggest growth and is the largest consumer of cfcs. Many companies in this sector are small-scale and account for about two-thirds of the total consumption of ods . A change-over to cfc substitutes is all the more difficult for these companies, since new techno-logy is steeply priced.

Speaking at mop-9, Union minister for environment and forests Saifuddin Soz regretted that the guidelines for funding projects for closure of production facilities of ods are taking too long. He said that lack of finance was a major concern, and is preventing enterprises from changing over to environment-friendly technologies. He lamented that despite the 1990 London Amendment, transfer of technology has not come about.

He reiterated that funds should either be provided to convert ods technology to non- ods technology, or allow ods to be used for servicing of equipment so that there is no financial burden on developing countries. "It will be unfortunate," he noted, "if in order to protect the ozone layer thousands of small entrepreneurs in a developing country go out of business."

He drew attention at the same time to efforts made by India for processing and implementation of phase-out projects. According to figures available with the ozone cell under the ministry of environment and forests, India has received us $43 million to cover 138 projects and activities as of June 1997. Of this, us $30 million have been disbursed to the industry to substitute cfc s, halons -- compounds of bromine -- and other ods . In mid-August, the fund reportedly approved an additional assistance of about us $10 million (Rs 36 crore). This includes seven projects by seven companies to phase out cfc s in the foam sector, amounting to us $92,500 (Rs 3.3 crore).

The government continues to be optimistic about the possibility of achieving cfc phase-out within the time-frame specified in the protocol. As an Article 5 signatory, India is committed to limiting cfc production after the year 2000 and phasing it out completely by 2010. "The first obligation on India, and all other developing countries, is to achieve a freeze in consumption of cfc s in the twelve-month period starting July 1999, at the level of the average consumption of cfc s in 1996-97," according to the director of the ozone cell, Anil Agarwal.

At current growth rates, taking the upper limit, India will be using about 25,000 mt of cfc s and halons per year by the end of the century. In other words, India will have used -- in a decade -- less than two-thirds of the cfc s and halons used by the us in 1985 alone ( see graph : The share of the burden). Clearly, any restrictions on export of these substances would be against India's interests.