Used in over 50 formulations, the red mite of Chhattisgarh might be heading for extinction 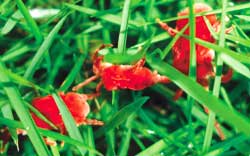 As the monsoon arrives in Chhattisgarh, people living along the state's rivers start looking for the red velvet mite (Trombidium species). A tiny insect found in the wastelands, the red mite is prized as a source of medicine and sold as such in far off Benaras and other cities across North India.

Trombidium is known by various Indian names: rani keeda in Chhattisgarh, sadhav bav in Orissa and bhagvan ki budhiya in many parts of North India. Even ancient Sanskrit literature contains references to a species called birbahutti; going by the description, this seems to be the red velvet mite.

Its significance lies, really, in its special place in different systems of medicine in India, especially the Unani school. It's used as a main ingredient in over 50 formulations. Homeopathic healers also prescribe a trombidium preparation to treat diarrhoea. In Chhattisgarh, traditional healers prepare herbal oils for paralysis treatment. The mite is also used as a tonic for new mothers. It's also a popular aphrodisiac that used to be gifted to newly-weds in this region at one time.

For villagers in the state, collecting and selling red mites is good business, though for a few weeks only. Starting at 50 paise to one rupee per kilogram (kg) at source, the price goes up to several thousand rupees per kg in the national market, with medicinal formulations costing even more. Of course, the primary collectors are quite unaware of its end price. They also have very little idea of the huge demand for the mite.

Despite the importance of this species, not much work has been done on it. Information on its medicinal uses is also limited to traditional healers. But some researchers are now trying to study its life cycle in the laboratory, based on the premise that trombidium sp. appears over ground when it's ready to lay eggs. Interestingly, the mite is very sensitive to its environment. In fact, I've noticed that during total solar eclipses, it shows a special response. There is a possibility that it could also be monitored to predict earthquakes.

With its unique defence system and bright red colour, the velvet mite has found it possible to steer clear of predators. The real threat to this beautiful and useful creature, comes ironically not from nature but from growing urbanisation around its habitat and over-exploitation by the drug trade. So much so that even traditional healers have now begun to advocate judicious use.

Their concern is not misplaced, given the fact that red mites have been declining in both Chhattisgarh and Orissa. As multinational companies, who see many opportunities in traditional Chhatisgarhi medicine systems, begin to enter the market, the pace of decline will only accelerate. It is to be hoped that the authorities will step in and do something to conserve the red mite. Perhaps declaring it as the state mite could save it from a premature extinction.