As field researchers will tell, you don't get up one fine morning and cut through an unknown forest in search of an elusive animal species. Even if you have a map to tell where the simian will be enjoying its afternoon siesta. You first look for what researchers call a field guide... 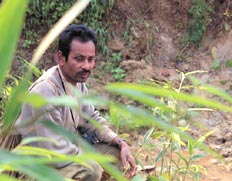 Dillip Chhetri was looking for a suitable site. He was to conduct a doctoral thesis on the stump-tailed macaque. He had been roaming the Northeast Indian states for a year searching for a patch of forest with a resident macaque population. The macaque is rare -- some primatologists say rarer than the tiger to sight. Chhetri would need to follow a few identified groups of stump-tailed macaques for two to three years and study their behaviour. He was looking for a small contiguous patch. The shy macaques, which roam the forest floor in groups, would be impossible to keep track of in a large forest, he knew. Jayanta Das, a colleague at the Guwahati University studying the equally rare Hoolock Gibbon, pointed him towards the Gibbon Wildlife Sanctuary at Jorhat, Assam. This is where Chhetri met Deben Bora.

Chhetri made a reconnaissance trip to the sanctuary. It's a small forest -- a quadrangle of about 4.5 by 5 kilometres -- almost an island, surviving the pressures from the surrounding tea gardens and villages, an adjacent army ammunition dump and a railway line that cuts through its heart. One criterion met, thought Chhetri. Now if he could locate the macaque populations inside the forest his mission could be accomplished.

But as field researchers will tell, you don't get up one fine morning and cut through an unknown forest in search of an elusive animal species. Even if you have a map to tell where the simian will be enjoying its afternoon siesta.

You first look for what researchers call a field guide.

The guide, in most cases, is a villager or a forest guard who lives 'with' the forest. Someone who knows the insides of the forest, just like you might know the back alleys and lanes of your hometown. Somebody who shows you the way around the forest -- his backyard -- and cuts through the thicket with his machete to create room for you to walk through the vines and the dense understory. Chhetri found his field guide in the most unlikely of persons -- Deben Bora.
Deben Bora has had an exceptional career. His income has soared by 200 per cent in the last decade. Today, he earns a handsome amount of Rs 50 per day. At the sanctuary, he is a daily wage labourer with the forest department. His usual day is spent digging trenches, cleaning the pathways in the forest and performing other menial tasks like bringing tea for the sahabs. But when a visitor arrives -- a researcher like Chhetri or a casually interested tourist -- the forest department is forced to ask Bora to stop work. Only Bora knows the denizens of the forest that the rare visitor hopes to catch a glimpse of. He is familiar with the sanctuary's seven species of primates -- that's nearly half the variety found in the entire country. Six of these are classified as endangered.

Chhetri soon realised Bora's prodigious talent. The two set out to find the group of stump-tailed macaque or the sinduri bandar as it is locally called. Bora lead Chhetri through the thick foliage of the sub-tropical evergreen forest tracing the gentle footsteps of the stump-tailed macaque. He was familiar with the macaque's love for the stem cortex of some plants. He followed the path of broken shoots through the almost impenetrable forest looking for the elusive clues. Bora said it would take three days to trace the population. They went in each morning and returned late in the evening. Bora estimated a day less. On the fourth day, to Chhetri's elation, they found a group of 63 stump-tailed macaques. The bounty grew in size; they soon found another group of 43.

Ecstatic, Chhetri decided to go to Guwahati, inform his department of the perfect find, and come back all prepared to carry out long-term research to complete his thesis. Bora, on the other hand, returned to dig trenches and clean the staff office.

Chhetri soon returned, saving Bora from the weariness of the daily chores. He hired Bora as a field guide, paying him Rs 200 per day from the funds he got to carry out the research. Bora led through the forest with lan, learning more about the simians as time passed, not just the stump-tailed macaque but the rest of the bunch too, including the hoolock gibbon, slow loris, capped langur, Assam langur and the pig-tailed macaque. His two children, mother and wife although exultant about the extra money he brought home, realised Bora now had a second family -- the primates. He was soon spending his entire day and most of the night with these new companions. This was in 1998.


Today Chhetri has submitted his doctoral thesis to the university. He regularly attends international seminars and presents facts about the behavioural ecology of the macaque. His knowledge is precious -- the primates have not been studied in the wild before with such great detail. Bora still digs trenches. And serves tea.

"With Chhetri da, I used to spend nights inside the forest, unafraid of the marauding elephants or other dangers. Sunshine or rain, we went data collecting," recollects Bora, adding: "He taught me a lot." He bends down to stir and serve the cup of tea the forest ranger has asked him to bring to the dimly lit rather melancholic staff office. The forest department officer orders him to show the guests around the next day and 'ensure' some sightings of the hoolock or the stump-tailed macaque.

Next morning, as ordered, he leads the guests into the forest, and duly shows a hoolock family strutting along the branches of the canopy like master trapeze artists. One family at first, then number two, three and four. "There are 20 such families in this forest, each a group of three to four. You shall not find them down on the floor of the forest; they love high perches and feed up there, like the one the holong tree provides them," he explains as he traces the path of the stump-tailed macaques. His machete is back in his hands, and a forest guard with a gun in tow (for the visitors' protection, the guests are told). Bora punctuates his steps with information on the simians. Is it easy to learn this art of trekking the primates, asks one guest overawed with his prowess. "No," says an unassuming Bora. "Once you know what their preferences are, they are as easy to zero in on as an alcoholic each evening at a bar." The conservator in charge, additional conservator, ranger and forest guards have not once trekked after the primates like Bora. They admit it.

Bora is unable to find the macaques that day. He apologises. Almost in an undertone he says: "The forest changes character everyday, if you do not 'meet' it regularly you will not recognise it."

His own plight on the other hand, remains interminably constant. The forest officers say Bora can only be a daily wage labourer. He is destined to earn Rs 50 per day. "I know he is brilliant but there is little we can do to give him a better and more secure job," says S Brahmo, the conservator of forest. "If you can, please put in a good word for him with the higher authorities," the forest ranger requests the guests.

"Come back sometime," Bora pleads the guests. "Come back when Chhetri da returns for the next season of data collection in a few months time. Meet him when you go to Guwahati." When the guests tell they have already met Chhetri he asks, "He did tell you he is coming, right?" Even as the guests leave the next morning Deben is digging a trench surrounding a watchtower that the elephants broke a few days ago.