Researchers studying the health effects of tiny particles from vehicular emissions are finding out more on a new threat: nanoparticles 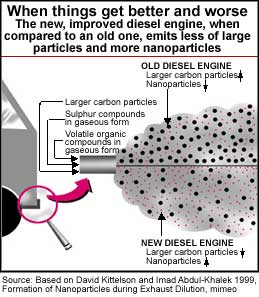 with growing awareness of the detrimental effects of particulate matter on human health and environment, international research forums are faced with a number of concerns. One of the most important is to determine the size of particulate matter that has the most harmful effects on human health. Only this can determine the size of particles to be monitored on priority.

Moreover, the cells of our lungs react first with the components on the surface of the particles. This makes the ultrafine particles (smaller than 0.1 micron in size) more dangerous as they have a larger surface area where they adsorb a greater amount of toxic chemicals than the larger particles. One micron (m) is a millionth of a metre. These findings have made researchers shift their attention to minute particles whose size is measured in nanometre (nm), that is, a billionth of a metre. Hence, these particles are called nanoparticles.
Scientific studies in recent times have thrown up a highly interesting and relevant debate regarding the monitoring of particles in the ambient air. It is being argued that the measurement of particulate matter only in terms of mass does not bring out the risk of exposure to particles. Therefore, it is more important to monitor the number of particles in different size categories. A recent joint report by Lidia Morawska of the Centre for Medical and Health Physics at Queensland University of Technology, and Dietrich Schwela of the World Health Organization in Geneva has raised some critical issues in this regard. The report says that large particles form bulk of the total mass of particles present in the ambient air. But, when considered in terms of number, ultrafine particles constitute over 80 per cent of particulate matter, although their total mass is usually insignificant in comparison with the mass of the larger particles.

The report further argues that the highest level of concentration of toxic compounds is related to these ultrafine particles and, therefore, throws up the question of measuring physical, chemical and biological characteristics in addition to numbers.

While scientists are trying to grapple with the import of the new findings, results of a study by the University of Birmingham in 1999 implicate road transport for the emission of ultrafine particles. The study shows that at a busy roadside, more than 44 per cent of the measured particles are below 10 nm, while corresponding figure at an urban background can be 30 per cent. Researchers now say that it is more sensible to measure the number of particles in the ambient air in order to evaluate air quality, instead of just the mass of particles. However, at present, air quality standards of all countries monitor the concentration of particles only in terms of mass.
Scientists worldwide are suggesting monitoring of nanoparticles not only in the ambient air but also in vehicular emissions. "Technical solutions aimed at reduction in total particle emissions do not necessarily result in concomitant reductions in the emission of fine particulate matter; in certain cases, the opposite effect is observed, resulting in increased emissions of fine particles," point out Lidia and her colleagues in an article in the reputed journal Environmental Science and Technology .

Perhaps only monitoring the number of nanoparticles will help explain the curious trend in the us , where reductions in the total vehicular mass emissions by a factor of about 10 has resulted in an increase in the number of fine particles emitted by a factor of about 20. When scientists from the Centre for Medical and Health Physics in Queensland University of Technology tested emissions from diesel vehicles - mainly buses - they found that nanoparticles (in the range of 7.5 nm to 304 nm in size) were emitted in greater number than larger particles (in the size range of 0.5 m to 30 m). "Mass emission concentration measurements, whether total mass or pm 10 (particles with a diameter of 10 microns), will not help identify vehicles that are the worst emitters of fine particles. For management and control of fine particle emissions, particle number or particle mass in the ultrafine range should be used as an indicator," they conclude.

Peugeot Citroen, a leading manufacturer of diesel vehicles, claims that it is developing a particulate filter system for diesel that will reduce particulate emissions to the levels of Euro IV emission standards. After the failure of particulate traps in the 1980s, this perhaps makes Peugeot the first modern, mass-produced automobile equipped with a diesel particulate filter. Some experts feel that particulate traps might be able to remove both large and ultrafine particles almost completely. According to Andreas Mayer of ttm , a research organisation in Switzer-land, "The general future expectation is efficiencies of 99.9 per cent. The special attractiveness of this technology (particulate traps) is immediate deployment for all engines, both existing and new. Thus, the problem of ultrafine particle emissions can be remedied at one go." Mayer adds: "Sulphur-free fuel is, of course, a prerequisite."

Not everybody is so optimistic. Shishir Bharadwaj, a Delhi-based mechanical engineer who works for the research and development wing of Eicher Motors, points out, "There is no monitoring or measurement of these nanoparticles in India. Even if we want to know something about these particles, we do not have the technology. And that makes monitoring and checking difficult." According to him, without knowledge of the exact nature of the particles and their properties, it will be difficult to trap the particulate matter. Dinesh Mohan of the Indian Institute of Technology ( iit ), Delhi, points out, "Particulate traps can be useful in trapping the bigger particles. It is not very clear how much they will help in trapping nanoparticles."

Moreover, given the technological level of Indian vehicles, these modern and future prospective developments will definitely take a long time to be commercialised here and to make an impact. The best option, till then, is to put a hold on the highly polluting diesel technology in order to check the already dangerous levels of particulate pollution almost throughout the country.

With inputs from Kazimuddin Ahmed