One-third of India’s population are migrants, but the country is yet to make a policy or plan for them, says collaborative study report by Institute of Social Sciences and UNICEF 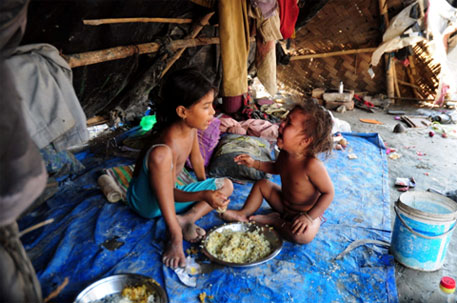 As many as 309 million people, nearly a third of India’s population, were migrants according to the 2001 Census. But the only ‘right’ which they are able to exercise is the one that allows all citizens the right to move, live and work in any part of the country, guaranteed by the Constitution of India.

Migrants are denied even the most basic human rights and are often forced to take shelter in unauthorised encroachments without the minimum basic facilities, says a study titled “Children of migrant poor in Kolkata: a study on human development perspectives”. The research project, a collaboration of the non-profit Institute of Social Sciences (ISS) in Kolkata and UNICEF, assessed living conditions of the migrant poor and their access to basic services like health, education and sanitation.

“Migration has been accorded low importance in India’s national policy,” the study says, adding, “slum rehabilitation programmes for the urban poor, such as the Rajiv Awas Yojana and Basic Services for the Urban Poor (BSUP) under the Jawaharlal Nehru Urban Renewal Mission (JNNURM), do not distinguish between migrants and the urban poor. Rather, rehabilitation policies tend to be short-sighted and non-accommodative of migrants and often displace them from urban centres.”

The study recommends “temporary structural changes in protocols” so that the migrant poor are issued identity documents (voter card and ration card) that will allow them to access government social security schemes such as subsidised food. At present, there is little data on what percentage of migrant populations have access to services under government’s flagship schemes, including those catering to women and children, the study noted.

“In absence of a policy or plan, internal migrants are left to fend for themselves,” says Debraj Bhattacharya from ISS. “In Kolkata they typically live in squatters colonies on the edge of the city where living conditions are worse than a notified slum which gets certain facilities. Their livelihoods as domestic help, rag pickers or rickshaw pullers are insecure and there is no scope for skill development.”

The study suggests an increase in the number of anganwadi centres (to provide children, pregnant and lactating mothers with supplementary nutrition) urgently as both migrant and non-migrant population living in slums and squatter colonies lacked access to them. There is clear evidence that child labour exists among migrant families, it said, adding, national child labour project (NCLP) schools are not having the desired impact. It recommends suitable options like vocational training for the urban migrant poor as means to eliminate child labour.

A primary survey covering 500 migrant and another 500 non-migrant families from slums and squatter colonies spread across 15 wards in Kolkata threw up interesting evidence.

All migrant families surveyed came to the city in the past 10 years. Forty-two per cent came to the city in the past five years. Ninety-six per cent families migrated in search of jobs and three per cent because of natural calamities like the cyclone Aila that hit parts of deltaic Bengal in 2009. Majority of migrant families (77 per cent) earned monthly incomes between Rs 1,501 to Rs 7,500. Dominant economic activities were daily labour (52 per cent) and working as housemaids (29 per cent).

Right to vote, not food

More migrant families lived in their own houses (66 per cent) than non-migrant families (46 per cent). As soon as they arrive in the city, the poor migrants try to make a jhuggi with dilapidated materials on unauthorized land which they call their own shelter, the study noted. For water supply, unauthorized squatters depended on public municipal taps, in some cases, fetching water from a distant place by a van-rickshaw or a bicycle. A large chunk of migrant families (26 per cent) used insanitary hanging type toilets, makeshift structures adjacent to drainage canals and water bodies. Over eight per cent families defecated in the open.

“Group discussions brought out a sorry state of affairs at the ICSD centres where migrants live,” the study observes. “Most centres are cramped for space and sometimes do not have safe concrete structures, let alone proper toilets and playing facilities. There have been complaints of insects found in served food... the ICDS centres are seen as ‘khichri schools’, places where children are given some food like khichri (rice and lentil preparation) rather than 'pre-schools’ where children are taught.”

On a brighter note, the study reports 100 per cent immunisation among children of both migrant and non-migrant households. About 600 children (age group of 10-14 years) were asked about their “hopes and aspirations”. Majority of boys said they wanted a job in a private firm while most girls said they wanted to become teachers. The second preferred job for boys was to join the police. Less than two per cent of the girls wanted to be homemakers and said they preferred to earn their own money.

Becoming skilled workers or entrepreneurs with some vocational training will help the children to break the cycle of poverty when they grow up, the study said. Else they would add to the insecure informal workforce, says the study.