Money pumped in development schemes in Bihar is giving rise to a new breed of village heads, flush with money and flexing muscles 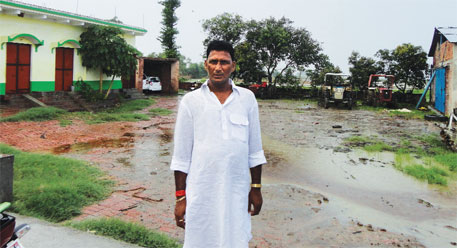 About a year ago killings and a spurt in the purchase of arms and luxury vehicles in extremely backward villages started to bother the Bihar police. It spied and found that mukhiyas, or village heads, had multiplied their assets beyond imagination. It took the police six months to track down their sources of income.

More than 100 mukhiyas are learned to have become millionaires in the past five years. They have amassed wealth by siphoning off money from development projects related to MGNREGA, solar lights, rural roads, Indira Awas Yojana and the public distribution service (PDS).

The police raided the houses of two mukhiyas, Sunil Verma of Dakkin panchayat and Archana Srivastava of Bahurva panchayat. Verma had assets worth more than Rs 3.75 crore, investment in insurance schemes of over Rs 35 lakh and had nearly 14 bank accounts. The other mukhiya, Srivastava, had amassed wealth of Rs 31 lakh. The police unearthed three more properties of hers, valuation of which is under way.

Director General of Police (DGP), Abhyanand, is taken by surprise. “We have discovered only the tip of the iceberg,” Abhyanand tells Down To Earth (DTE). The DGP has directed all superintendents of police (SPs) posted in each district to maintain zero tolerance towards corruption. He has also asked the district police heads to keep gathering information about the wealth amassed by mukhiyas.

On joining the dots, the police realised that the race for siphoning off development funds was leading to murders of former mukhiyas or anyone who opposed the loot. And to tighten their stranglehold in villages the mukhiyas, whose salary is barely Rs 8,000 a month, are purchasing arms and SUVs.

The file containing confidential information about the millionaire mukhiyas is getting thicker in the newly constituted Economic Offence Unit (EOU) of the Bihar Police. The police say they are probing about 500 mukhiyas who have net assets worth over Rs 1 crore each.

The millionaire mukhiya file contains information about a mukhiya of Mahua block in Vaishali who used to draw an orchestra cart before becoming the mukhiya. Today he owns two SUVs, three rifles and a palatial three-storey house. Another mukhiya of Dighwara block in Chapra, who worked as a construction labourer, now owns an SUV and three houses and has employed a battery of armed private security guards.

This correspondent visited the houses of two such mukhiyas mentioned in the millionaire mukhiya file of Buxar district.

Harendra Singh, head of the Muktipur panchayat, has built a six-metre-high watch tower in his farmhouse, sprawling over a hectare. An ex-armyman, Singh has also planted teak in his farmhouse. His two sons run a private school and a general store. No one in his panchayat dares to speak about him. “He is our godfather,” village residents say, refusing to divulge their names. Singh refused to meet this correspondent and his sons denied permission to enter the compound of their house. 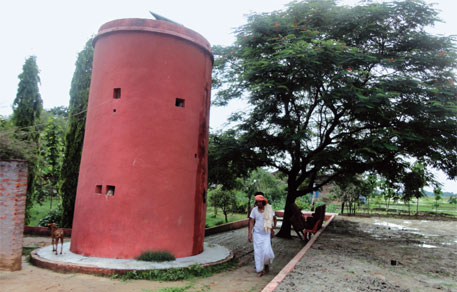 The Sub Divisional Police Officer of Buxar, S Nomani, says Singh once owned an illegal elephant. “He sold the elephant after he sensed that his illegal income is under scanner,” Nomani says.

In neighbouring Kaithar panchayat, Siddhnath Singh, husband of Mukhiya Rita Devi, flexes his arm muscles in response to a query about the owners of six tractors, one SUV and a hatchback parked in their 2,000 sq m premises. A little later, he replies, “We are farmers and we need tractors for farming. And the SUV is a gift from my in-laws.”

He says in his “regime” the poor and the backward are able to lead a decent life. “I have allotted houses under Indira Awas Yojana to 377 beneficiaries,” he boasts. On being told that allotment of so many houses in a village of 4,000 families sounds suspicious, Singh bursts into abusive language, accusing the state government of curtailing the powers of mukhiyas.

Barely 12 hours after leaving the village, MLA from Muzaffarpur, Ajit Singh, calls up this correspondent to say that Siddhnath Singh is a close family member and requests not to write about him.

Siddharth Mohan Jain, SP of Buxar, says about 10 mukhiyas in the district have amassed wealth beyond their known sources of income. “They are not only embezzling development funds but have also established a reign of terror in their panchayats,” he says.

The police are again busy joining the dots to understand how mukhiyas are able to loot a large pie of development funds. Scams are not new in Bihar. The MGNREGA scam is estimated to be to the tune of Rs 6,000 crore and the solar light scam of Rs 100 crore is sub judice in the Patna High Court. But it is only now that their extent and mechanism are becoming clear.

The EOU wing of the Bihar Police believes the connivance of government officials with mukhiyas is leading to the loot. The network was exposed during a police raid in March this year that unearthed the Rs 5 crore scam in Indira Awas Yojana. The police raided the residences of 20 government officers and a mukhiya, Domo Paswan, in Harpur panchayat in Darbhanga district. It was found that the Singhwara Block Development Officer (BDO), Narendra Karan, and Mukhiya Domo Paswan together swindled funds from the housing scheme during 2005 to 2011.

Abhyanand says EOU was constituted to nail corrupt officials. “Now EOU is raiding houses of mukhiyas, too. In a way we are curbing corruption from top to bottom,” he tells DTE. FIRs have been lodged against 233 mukhiyas. The role of BDOs in the state is already under suspicion in the multi-crore-rupee MGNREGA scam. Non-profit Centre for Environment and Food Security, which exposed the scam, accuses BDOs of engineering the scam and is demanding that they be kept away from probe committees.

Priyadarshini Sahini, president of the Mukhiya Association, blames the police for defaming mukhiyas. Sahini claims the Bihar government has curtailed nearly all the powers of mukhiyas. “Now mukhiyas have a limited say in the allotment of MGNREGA work, houses under Indira Awas Yojna and PDS inspection,” he says. He alleges that the Bihar Police is the most corrupt entity in the state.

Police officials refute the claims of Sahini. They say since the constitution of EOU, the Bihar Police has raided and confiscated the house of former DGP Narayan Mishra and brought to book an officer of the deputy inspector general rank, Alok Kumar. In another case, Md Yunus, an enforcement officer posted in Kaimur, was found to possess 10 ha of land, a movie theater and Rs 61 lakh in cash.

“We have not spared anyone,” Abhyanand says. According to him, controlling corruption has become an additional duty of the police in Bihar.

In recent years, the rags-to-riches trend among mukhiyas has led to a volatile situation. There have been murders of whistle blowers, including RTI activists. In the past three years, seven RTI activists have been murdered and in three cases mukhiyas were directly implicated in the killing. Almost every mukhiya in Bihar has Rs 20 lakh to Rs 90 lakh, depending on the size of the panchayat, according the Panchayati raj department.

The police has accepted that despite 56 raids not a single mukhiya or government official has been arrested so far.