A bill that promises direct benefit to people from the minerals underneath their land is ready to be tabled in Parliament this monsoon session. The Group of Ministers gave it a nod on July 7 after minor changes in the contentious profit-sharing provision, which requires mining companies to shell out a portion of their profit for people displaced or affected by their operations.

The bill would replace the existing Mines and Minerals Development and Regulation (MMDR) Act of 1957.

The profit-sharing provision in the MMDR Bill of 2011 requires coal companies to share their net profit—26 per cent—every year with the affected communities. Companies that mine major minerals like limestone and iron ore will have to give the affected people an amount equal to the royalty that they pay to the state government annually. For those mining minor minerals like sandstone and marble, the states will decide the profit-sharing percentage in consultation with the proposed National Mining Regulatory Authority.

“We area ready to pay 26 per cent of the royalty to the affected communities, but not 100 per cent,” says R K Sharma, secretary general of Federation of Indian Mineral Industries (FIMI). “One needs to understand that the risk is very high in exploration. All these taxes will add to the existing burden on miners and no one would be interested in exploring. This kind of provision will make mining unviable in India.”

The bill, among other provisions, recommends a framework for scientific mining, gives preference to people of Scheduled Tribes for mining small deposits, and expands the definition of project-affected people by including those whose livelihoods and traditional land rights are affected (see ‘Highlights of MMDR Bill’).

What’s in store for people

By the reckoni ng of the Centre for Science and Environment (CSE), a Delhi non-profit, the bill’s profit-sharing provision will make around Rs 10,500 crore a year available for the affected communities at the current level of mining. The calculation does not include minor minerals. However, the sum is seven times the budget of the Union Ministry of Tribal Affairs for 2011-12.

About 86 per cent of the amount—Rs 9,000 crore—will go to the top 50 mining districts, in terms of value of mineral production. Home to almost half the country’s mining lease area, these districts are spread across Jharkhand, Odisha, Madhya Pradesh, Chhattisgarh, Andhra Pradesh and Maharashtra. “With close to 2.5 million people directly affected by mining in these districts, the profit share translates to Rs 38,000 per person a year,” says Chandra Bhushan, deputy director general of CSE. This is about nine times the poverty line (Rs 4,380 a year for rural areas) in India.

According to CSE’s analysis, once the provision comes into force, Korba of Chhattisgarh, the top mining district of the country, will get about Rs 961 crore every year. Pali of Madhya Pradesh, at the other end of the spectrum, will get Rs 18 crore annually. Dantewada, a Naxal-hit district in Chhattisgarh that has more than 80 per cent of its population living below the poverty line (BPL), can receive over Rs 400 crore as profit share. This means, each household in Dantewada can get Rs 40,000 annually, whether affected or not.

The bill, however, is not explicit on how to manage the profit share.

It suggests setting up a district level body, called the District Mineral Foundation (DMF), which will receive the funds accruing from the profit-sharing provision of the bill. A governing council, chaired by the district magistrate, will govern and administer the fund (see ‘Skewed council to manage fund’).

“The council would decide where and how to spend the fund. So it is imperative that majority of the council members are from the affected community,” says Bhushan. DMF should act as a transparent and accountable organisation to avoid corruption, he adds.

A CSE study suggests that DMF should function like a professional body with a managing committee or board of directors to collect and manage the fund. There should be at least 50 per cent people’s representatives in the governing council. “The detailed structure of DMF can be worked out once Parliament passes it,” clarifies an official with the Ministry of Mines (MoM), who did not wish to be named.

The bill also does not mention where and how the fund will be used.

CSE researchers suggest that the fund should be used to reduce impoverishment by giving out cash doles to the affected BPL people. A portion of it can be used for building alternative livelihoods for the affected community by putting them to use for education, health and vocational training. “A part of the money should also be set aside for future by investing it. This money is to be used once mining closes in the area,” Bhushan says.

The implementation of the mechanism poses another concern—identification of people affected by older mining projects. It may be a difficult task due to migration and influx. “Although difficult this is not an impossible task. We can identify beneficiaries of older mines by deciding on a cut-off date,” assures the MoM official.

Sharma of FIMI says, “We carry out corporate social responsibility voluntarily and this is how it should be.” Making such mandatory conditions will only discourage investments in tribal areas and hamper their growth. This may lead to transfer of the additional burden to consumers, he adds.

But an analysis of the annual reports of several mining companies shows the doubts of the industry are unfounded. 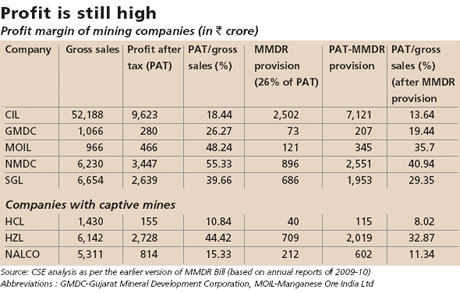 The same stands true for companies with captive mines. Hindustan Zinc Limited (HZL), for instance, will see a drop in the profit to gross sales ratio—from 44 per cent to 33 per cent post profit-sharing. The ratio will dip from 14 per cent to 11 per cent for NALCO (National Aluminium Company Ltd), while that of Hindustan Copper Limited (HCL) will go down by three per cent once the profit-sharing provision comes into effect. People living in mining districts could certainly benefit from a share in these profits.

Need for the provision

Most of the country’s mineral deposits are in regions that have most of its forests, tribal population and major river systems. The major mining districts of the country are not only ecologically devastated and polluted, they are also the poorest and most backward areas of the country. There is no dearth of examples.

Keonjhar district of Odisha, for instance, produced over Rs 7,000 crore worth of minerals, mainly iron ore, in 2009-10. Over 60 per cent of Keonjhar’s population is BPL. It ranks 24th in the state’s Human Development Index (HDI) of 2001. Koraput is another district in Odisha which produces 40 per cent of the country’s bauxite. Close to 78 per cent of population in the district is BPL. Similarly, Bellary in Karnataka, which has been in the limelight for illegal mining, produces about 20 per cent of India’s iron ore. Most people here are impoverished; the district ranks third from bottom in the state HDI. Bhilwara of Rajasthan faces a similar fate. Producing over 80 per cent of India’s zinc, Bhilwara ranks 25th in the HDI of Rajasthan. Cuddalore in Tamil Nadu produces three-fourth of India’s lignite, while more than half of its population lives below the poverty line. 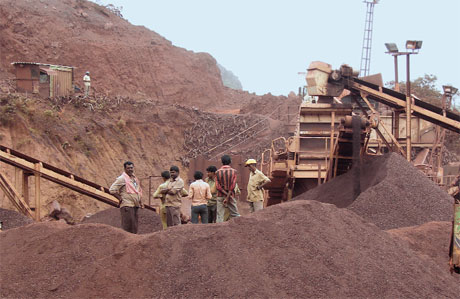 Clearly, the benefit of mining is not flowing to the districts where the minerals are being mined. Besides, mining companies have a poor track record of compensating displaced people. Though people are compensated in accordance with the state’s resettlement and rehabilitation policy, K B Saxena, former principal adviser to the Planning Commission, says, “it is inadequate”.

Although some states have tried to devise and implement mechanisms in the past to ensure that the mineral wealth flows to the affected communities, they have not produced the desired results. The Odisha government, for instance, announced a Peripheral Development Fund for mining areas in 2004. Mining companies, including the Odisha Mining Corporation, were to contribute five per cent of their annual profit to the fund for the welfare of affected communities.

But mining companies challenged the directive in the Odisha high court. The court rejected the state government’s policy in 2008 on the ground that no legislation was formulated to set up the fund. Till then the state had collected Rs 52 crore as part of the fund. “We have approached the Supreme Court against the high court order,” says Manoj Ahuja, secretary (mines) of Odisha. “Hopefully, once the MMDR provisions become applicable, peripheral development will be taken care of.”