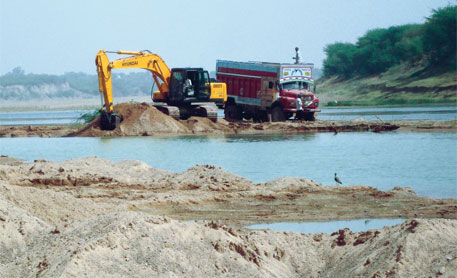 Sitting pretty over a Supreme Court order for almost a year and a half, the Ministry of Environment and Forests (MoEF) has finally moved its muscle to regulate mining of minor minerals such as sand, gravel, brick-earth, mud and other stones mostly used in construction. Their indiscriminate mining has caused extensive damage to the environment. While sand mining has scarred the rivers, removal of boulders and pebbles from riverbanks has made many areas susceptible to floods. Brick-earth mining and soil excavation have ruined fertile land.

The slew of orders forced MoEF to amend its Environment Impact Assessment (EIA) Notification, 2006 on September 9, and state that mining of minor minerals in land leases less than 5 ha will not be allowed without clearance from SEIAA. For the first time, minor minerals now figure in the EIA notification and mining in less than 5 ha is regulated (see ‘Why the reluctance?’,).

Mining of minor minerals being a state subject, state governments expressed concern over the Supreme Court and NGT orders. The blanket ban was a big blow for states such as Rajasthan and Madhya Pradesh. According to Indian Bureau of Mines, Rajasthan produces 65 per cent of the country’s total production of minor minerals. Madhya Pradesh generates Rs 140 crore only from mining sand.

The Madhya Pradesh government pleaded before NGT that instead of SEIAA, district-level committees be allowed to give environmental clearance for mining proposals. At this, NGT chairperson Justice Swatanter Kumar reportedly asked, “Can you enact a law which would be in conflict with the Central law?”

Meanwhile, the Madhya Pradesh State Mining Corporation (MPSMC) has filed a petition in NGT. The corporation has petitioned that according to Madhya Pradesh’s Minor Mineral Rules, MPSMC, a public sector undertaking (PSU), has the sole right to mine minerals in the state. The right to mine minor minerals should, therefore, lie with the PSU. The petition also states that the government is incurring huge revenue losses because of the blanket ban.

But the petition reveals that most of the sand mining contracts till 2015, worth crores of rupees, have been given to Jaipur-based Shiva Corporation, which has been involved in cases of illegal sand mining.

This apart, in 2011 MPSMC’s contractors were accused of murdering a civil servant in Mahoba district in the state. Ajay Singh, leader of the opposition in the state Assembly, has accused the state mining corporation of being hand-in-glove with Shiva Corporation. “Government diluted the environmental clearance process to favour companies like Shiva Corporation,” he says. On March 23, 2013, the Madhya Pradesh government amended the minor mineral rules. Giving leeway to mine lease owners, it allowed them to function for a year even if they did not have their mining plans ready. What’s more, it stated that if the regional department of geology and mines failed to approve mining leases within 90 days, the plans would be considered approved.

Activist Soumitro Roy, who campaigns against indiscriminate sand mining, says Supreme Court and NGT orders have had no impact on illegal mining. “There are more than 150 companies operating in Madhya Pradesh which take contracts from MPSMC. Even after Supreme Court’s ban in 2012, these companies continued taking out sand and other minor minerals from Hoshangabad, Sihore and Raysen districts without environmental clearances,” he says.

At a meeting organised by the mines ministry on April 12, 2013, representatives of nine states—Punjab, Haryana, Madhya Pradesh, Goa, Odisha, West Bengal, Rajasthan, Uttar Pradesh and Tamil Nadu—said the process of obtaining clearance from MoEF is too complicated. They asked for a single window clearance for all kinds of leases.

Small mine owners usually do not have the capacity to go through the process of obtaining environmental clearances, they said. Nihar Ranjan Sahu, senior environmental engineer, Odisha Pollution Control Board, says, “Small lease holders often do not have the capacity or the understanding to undertake or engage a consultant to develop Environmental Management Plans (EMPs), essential for clearance from the ministry. Handholding on part of the district collector is, therefore, necessary at this stage.”

Other state representatives at the meeting said that small lease holders’ inability to achieve environmental clearance and tight regulations would increase incidences of illegal mining of minor minerals.

But illegal activities are rampant in states and a lot of it is facilitated by state governments, MoEF said at the Supreme Court during the Deepak Kumar v states of Punjab and Haryana case, which led to the landmark judgement on minor minerals. It is a known fact that companies broke their lease areas so each lease remained below 5 ha. This was done to circumvent the environment clearance process. MoEF submitted an affidavit on November 23, 2011, stating that “where the mining area is homogenous, physically proximate end on identifiable piece of land of 5 ha or more, it should not be broken into smaller sizes to circumvent the EIA Notification, 2006 because it is not applicable to mining projects having lease area of less than 5 ha.”

Some states have initiated steps to follow the Supreme Court order and amend their mining rules (see ‘States regulate small mines’). However, most have accused MoEF of delaying work.

MoEF claims that it cannot be held responsible for the delay in implementing the Supreme Court order. “The process of consultation with ongoing litigation in courts takes time, so it was delayed,” says Ajay Tyagi, joint secretary, MoEF.

The Rajasthan government has submitted to the NGT that on June 19, 2012, the department of mines and geology proposed amendment to the Rajasthan Minor Mineral Concession Rules, 1986. It regulated grant of mining leases and quarry licenses for minor minerals. It also proposed EMPs for small mining clusters. The EMP would address concerns such as removal and utilisation of top soil, storage of overburdens, reclamation and rehabilitation of lands, precaution against air pollution, water management and restoration of flora. But MoEF has not cleared a single proposal of the new regulatory regime, D S Sodha of geology and mining department has submitted to NGT.

Tamil Nadu, where large-scale mining of coastal sand occurs due to the presence of rare earth elements, has also proposed amendments to its mining rules, says Atul Anand, commissioner for geology and mining in the state. But the proposals have not been cleared by the state authorities.

V Sundaram, retired bureaucrat in Tamil Nadu, has alleged that Rs 96,000 crore worth monazite has been illegally exported by private beach sands manufacturers to various countries. India is the third largest producer of monazite, an ore found mostly in the beach sands of Tamil Nadu and Kerala. It is from monazite that thorium, a radioactive element, is extracted. Following such complaints, the state government appointed a three-member team to investigate illegal mining of monazite in Kanyakumari, Tirunelvelli and Tuticorin. The report is still awaited.

Attempts to regulate minor minerals have brought sand and mud, crucial for the construction industry, under the environmental clearance process.

According to the urban development ministry, the country was short of 18.73 million housing units in 2012. The shortage will only increase in the coming years. Rising demand may lead to rampant illegal mining of minor minerals. Can MoEF regulate them to safeguard the environment? Playing proactive may help.