Will the forest department rewrite it? 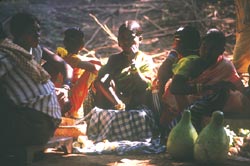 India's mfp sector is quite in the dark. Non-nationalised mfp items haven't been surveyed. "To manage a resource, you have to know what it is. I doubt if a working plan officer of a forest department can guarantee whether the species enlisted as mfp are present in the forest or no," says Bhojvaid of fri. "Foresters all over the world have been trained only in management of timber, and not mfp. That's why it is difficult to get the contribution of mfp to the gdp of any region." The Indira Gandhi National Forest Academy in Dehradun put mfp in the curriculum only in 2001.

Absence of hard data means the forest department often issues blanket bans. To ban an mfp is to sign its death warrant, an open invitation for smugglers to take over. The first ingenious scheme to market a herbal product of forestry origins and share the benefits with tribals was in Kerala. The tribe was Kani; the wonder herb was arogyapacha. The experiment didn't take off because the forest department didn't allow leaves cultivated by the Kani people inside the forest to be transported -- it wasn't on their mfp list (see: 'How to sell a wonder herb', November 15, 1998).

No wonder the market is predominantly underground. Sensible forest officers -- an overwhelmed minority -- openly admit that forest service training doesn't prepare a person for marketing. Traders fear imported synthetic alternatives to mfp such as harra. This would strike at the very root of creating sustainable livelihood from forests. And poor people, driven to desperation by restrictions by foresters, are very likely to destroy the forests.

To be fair, there are some novel efforts, too. The mp mfp Federation is trying to sell herbal medicines in a recently created shop called Sanjivani. Chhattisgarh has embarked on an ambitious project of creating a People's Protected Area in Bastar that precedes similar efforts throughout the state. ppa is about promoting sustainable harvest of mfp and making value-added products. The department would do well to culturally engage with the tribal people, instead of lecturing them on in situ conservation and ex situ cultivation. In Chhidgarh village of Bastar, the Adivasi Harijan Kalyan Samiti, an ngo, has shown success in organising women's groups to deal with, among other things, the mfp trade. Their success is rooted in an involvement with Gond culture that goes beyond the clichd 'local participation'. Foresters in Bastar are appreciative of this effort. Why not learn from it?

It is also time to stop bad-mouthing mfp traders. Herb traders are often criticised for exploiting tribals but they are in a business, according to Raipur-based herb expert Pankaj Oudhia: "I get the opportunities very frequently to meet and interact with these herb traders. They have rich traditional knowledge of medicinal uses of herbs in treating several common diseases." Oudhia has documented this knowledge. "It has become a fashion to decry the trader/money lender. When a poor person needs cash urgently at night, the government is never there. It is the local trader," says a forest officer. The National Medicinal Plants Board (nmpb) is holding consultations with, among others, traders and manufacturers. But the Herbs and Kirana Association of Delhi complains that these meetings are only for so-called experts to wax eloquent and present papers. Part of the board's agenda is to create an authority to certify value-added mfp products for exports.

How does one explain the ignorance of existing legal mechanisms, like pesa? No forester or bureaucrat has come out with a plausible plan to implement this legislation; most people don't even understand it. "Although the understanding of tradition embodied in pesa is rather simplistic, and historically naive, it can help people who are already organised," writes Nandini Sundar of the Institute of Economic Growth in Delhi. As yet, there are very few signs of preparing people to take up forestry.

The only solution that the governments have had to offer thus far is nationalisation. This hasn't worked in the long run, and among those who recognise its shortcomings is Ram Prasad, mp's principal chief conservator of forests. While private trade leads to exploitation, nationalised trade is plagued by the inefficiencies of the government, says N C Saxena. The best option, he reckons, would be for the government to announce minimum support price and mop up 30-40 per cent of the produce. As yet, there is no single-shot solution to organising the mfp market. V K Bahuguna, inspector general of forests with the mef, talks of site-specific solutions. There are plenty of ideas. But will the forest department be open to them? If mfp is to play a crucial role in improving the lot of India's people and forests, the department needs to unlearn bureaucracy and re-learn business. Will it?