Successful programme to conserve lions is beginning to implode on itself

The Asiatic lion is quite vulnerable. "The Gir population is insecure for two reasons," says A J T Johnsingh, a wildlife expert with the Nature Conservation Foundation, Mysore. Firstly, "the population has risen from a very low number leading to inbreeding and a genetically homozygous population. Reduced genetic diversity affects reproductive health of the species and increases mortality of the young".

Secondly, "an epidemic could wipe out the population", not only because inbreeding weakens the immune system, but, crucially, lions exist as a single population in India. This is precisely why the World Conservation Union- iucn continues to designate the Gir lion as 'critically endangered', and desires separate lion populations. Forest officials assert they are prepared for any outbreak.Further, justifies Bharat Pathak, Conservator of Forests-wildlife, Gir national park, any outbreak is unlikely to spread to all parts of the forest, so it will not affect the entire lion population at the same time. But he, too, does not rule out the threat. 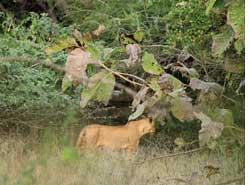 Gir's lion population is, beyond the protected area's (pa's) carrying capacity. As far back as 1990, a census counted some 221 adults living within the pa, and a further 30-40 lions outside. Since 2002, wildlife scientist Y V Jhala has radio-collared 16-18 lions, to track their movement. "Radio collaring has shown," he says, "lions have set up 'meta-populations' outside Gir for want of space, or food." Adds Pathak "These are young males moving out in search of new territories." Kaushik Banerjee, a Wildlife Institute of India ( wii) researcher, terms it a 'dispersal' to earlier habitats. Fact is the ground reality of lion conservation has changed beyond recognition, placing it in far greater danger than ever before.

The land-use pattern around the park is completely different today. Farmers grow mango, groundnut and sugarcane. This has resulted in high private land values; grazing lands have been encroached and privatized, while excessive use of groundwater has depleted the water table to dark zone, placing, in all, more pressure on Gir forest--for supply of fuelwood, fodder, and ntfp collections to people and livestock--from 98 villages around Gir. A study of Talala taluka on the periphery reveals that even as sugarcane and mango cultivation here increased by over 85 per cent and over 100 per cent in the 1990s, straying of lions and leopards doubled. The study reported another effect twice as much livestock were killed here by lions and leopards than before.

Commercial agriculture has hit the lion hard, too. On an average, 25-30 lion deaths have been reported, every year, for the past three to four years. In 2002 and 2004, there were cases of lions being poisoned by farmers. In 2007, out of 32 lion deaths, over 20 died by falling in open irrigation wells. The same year, three lionesses and two cubs were electrocuted by the fence Durlabh Bardoliya, a farmer in Prempada village in Gir East, had built to protect crops. "The farmer is in jail for a crime he never intended; such incidents lead to dissent towards lions," says Kishore Kotecha. Electric fencing has become a common, and dangerous, practice in the pa's fringe.

In the 1980s the proportion of livestock killed was greater within the pa compared to outside. Now it's the opposite.Manish Bhai, a resident of Gadia village in Gir East, does not take compensation if wild animals kill his cattle; however, he says compensation takes about six months. Mumbai-based Vanishing Herds Foundation (vhf) has proposed an mou with state forest department as soon as the forest department surveys the kill, vhf will be given a copy of the order and the foundation will then settle claims within two-three days from their own fund, and be reimbursed by the government.

The larger number of kills outside also pose a question could lions be moving out still looking for cattle, a traditional prey, so transforming the re-settlement of Maldharis--100 nesses (small settlements) were relocated outside the pa; with them went livestock--into an ironic exercise? No, contends the Gir administration, the prey base is intact. Fifty four nesses are still inside; livestock there has grown to about 20,000. Also, the pa's herbivore population has increased from about 38,221 in 1995 to 49,965 in 2005.

But lions do follow the ungulates outside. So do leopards, bringing in yet another dimension to animal-human conflicts here in July 2008, for instance, a leopard picked up a five-year-old girl child from old Zakhiya village in Gir East at night. Poaching, too, was never a big issue in Gir. But today, people say incidents of claws missing from lion carcasses are common. In 2007, more than a dozen lions were killed by poachers. "Unlike the tiger, the lion's body parts did not have international market, a main driver for poaching. With so much focus on protecting tigers, poachers are turning to lions, passing off lion claws and bones as tiger parts," says Kishore Kotecha, of Rajkot-based Wildlife Conservation Trust.


These changes foreground the need for lion conservation to grow towards creating separate lion populations. Y V Jhala also believes if the Maldharis are given a responsible role in protection, the lions stand a better chance. But is it possible to reverse their alienation (see box Many want out)?

As a response to lion movement beyond the pa, the Gujarat forest department is working on the idea of 'Greater Gir'. The programme includes adding up more areas from outside Gir that can house lions. Since lions have already made Mitiala their home, it was accorded sanctuary status in 2004. In May 2008, the Gujarat government accepted the state forest department's proposal to accord sanctuary status to Girnar hills, a patch of forest connected to Gir through grasslands and agricultural fields. According to the forest department, notification will be issued shortly. "Girnar and Mitiala were historical lion ranges; as numbers increase, they are moving there," says R D Jhala, a retired police official from Gujarat living at the periphery of Gir pa. But this would only create a 'meta-population', a self-defeating strategy A meta-population consists of three to four populations that occupy a large habitat block each; each block is connected, allowing animals to interact. This does not address the issue of genetic bottleneck or threat from epidemics. "Lion populations need to be separated "physically" to ensure survival," explains the wildlife scientist. This could be "a natural barrier like a mountain range or conditions that do not allow populations to mingle". Moreover, as he asks in the context of Girnar's inclusion into Gir, "for how many areas can this be done?" In these new areas, mining is rampant.

The problem is, to create a separate population, lions need relocation, an idea that makes Gujarat see red. "The kind of opposition mounted to the idea of relocating a small population outside Gujarat makes it look like the people of Gujarat think all the lions will be moved to Kuno," says Y V Jhala. "Fact is you need about 10 lions."

A 1993 Population and Habitat Viability Assessment workshop held at Vadodra in Gujarat first identified this pa in Madhya Pradesh as the most viable home for a second lion population. In 1993-94, a wii survey recommended the site. Kuno was diverse a riparian habitat acting as a corridor, connecting a mosaic of plateau, valley and grasslands interspersed with woodland, the latter capable of providing coverage and support to both prey and predator. Kuno Wildlife Sanctuary was established in 1981 with an area of over 340 sq km. The wii survey had recommended a 700 sq km national park, after resettling humans; so, the area was increased by adding 900 sq km as buffer. "The current population within the Gir pa can easily sustain removal of some adult lions. It will also help maintain the current population within the pa," says lion expert Ravi Chellam, director of Ashoka Trust for Research in Ecology and the Environment who headed the1993-94 survey team.

The Union Ministry of Environment and Forests accepted the proposal. In 1997, the Centre directed 200 lions be moved there. "Forget the lion, we will not even allow a cub to be shifted out of Gir," thundered (then) Gujarat chief minister Shankersinh Vaghela thundered at a public meeting . In 1999, as the process continued, the (then) principal chief conservator of forests, Gujarat, (then) chief minister Keshubhai Patel and the bjp mla from Junagadh expressed opposition to the movement of lions outside the state.

On April 30, 2007, the Centre informed Parliament it was necessary to relocate Asiatic lions from Gir to save them from extinction. The immediate context was that more than a dozen lions were poached; behind lay a series of well-publicized mishaps. Said chief minister Narendra Modi "The lions are a symbol of Gujarat's uniqueness. Why should we share it when we are capable enough?"

Now, the Central Zoo Authority and the National Tiger Conservation Authority (ntca) have prepared a compromise blueprint that will not require Gujarat to release any of its lions. Pure-bred first generation Asiatic lions will be selected from different zoos. These will breed in a big natural enclosure at Kuno. Herbivores will be released so that second generation lions can develop hunting skills. "The third generation lions should be fit to be released in the wild outside the enclosure," says Rajesh Gopal, Member Secretary, ntca.

The root of the problem remains unsolved. Will the Asiatic lion ever go off the iucn critically endangered species list?