Throughout the 1860s a frail young European woman with a medicine chest was a conspicuous presence at the women's ghats of the river Yamuna in Delhi. This was Priscilla Winter, an Anglican missionary who... 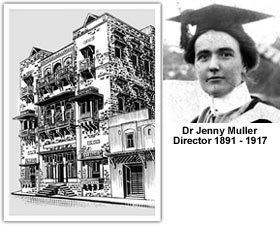 Throughout the 1860s a frail young European woman with a medicine chest was a conspicuous presence at the women's ghats of the river Yamuna in Delhi. This was Priscilla Winter, an Anglican missionary who had absolutely no training in medicine. Missionaries like Winter were quite common in European colonies in the nineteenth century. Well before qualified doctors and nurses became familiar figures on the mission scene, many ordinary missionaries made attempts to relieve symptoms of sickness in communities surrounding their stations.

Priscilla Winter had arrived in Delhi in 1858 to join the Union Society For The Propagation of Gospel (uspg) order there. Her original duties were to spread the word of the Gospel among the women of the city. But the Delhi Mission News -- a quarterly newsletter of uspg's Delhi mission -- notes, that as soon as Winter got around with this task, "her quick eye at once saw the importance of medical women in India." Winter herself wrote, "Women in India get no relief from suffering. The medicine man takes them in hand and his remedies are the crudest." So she started "distributing simple remedies to all classes of Hindu women whose sole respite from the confines of the purdah was in going down to the river to take their vows." There were frequent epidemics of cholera and influenza in the city and women, impressed by the treatments offered by the missionary, often recommended her to others.

The work expanded. During a furlough in England, Winter sought support for her plan to establish a dispensary in Delhi. An association of supporters -- White Ladies Association -- was formed to provide funds and publicity for the scheme. In 1874, a house was rented in Chandni Chowk in the walled city and a woman worker engaged to manage the dispensary, to train nurses and visit sick women in their houses. The Punjab Government donated Rs 410 per year for medicines and the Delhi Municipality contributed Rs 75 a month for scholarships for trainee women nurses. The rudimentary dispensary at Chandni Chowk formed the modest origins of what later came to be known as the Delhi Female Medical Mission.

Galvanising support was not difficult. To European supporters of missionaries long accustomed to reports of missionaries being hooted out, the impressive reception accorded to medical missionaries by indigenous people was a welcome contrast. Public imagination in England was stirred by the idea of heroic missionary doctors carrying the gift of Western medicine to lands where people "reeled under the terrible burden of sickness which could not relieved by archaic indigenous methods of healing." The claim that in the hands of female missionaries medicine provided a means of entering the previously uncolonised space of the zenana (women's quarters) was even more arresting.

In spite of home support, the Delhi medical mission faced many diificulties. During the early years, many improvised methods were adopted to provide medical care. The first medical missionaries drawn into the mission possessed uncertain skills. Many relied, like Winter, on little more than medicine chests and the wisdom of experience. In 1870 a midwife with some bare minimum hospital training, joined the dispensary.
How long could the missionaries carry along with rudimentary health care? Over the course of the nineteenth century, there was a gradual hardening of Western attitudes towards indigenous healing. According to the historian Rosemary Fitzgerald, "shoddy missionary work was also perceived as compromising wider imperial ambitions of establishing the hegemony of Western medicine." In 1883, C R Francis, the principal of Calcutta Medical College, reminded missionaries that the medical missionaries were supposed to "impress natives with their professional skills."

The missionaries tried to stave off such criticism by pointing to the scale of death and disease in the colonies. The head of the Delhi mission G A Lefroy, for example, held that missionary ladies were far more equipped to deal with diseases than the "archaic unani hakims and the barbers." But increasingly, missionaries became apprehensive that their medical workers would lose all goodwill if they persisted with their half-baked methods. In fact one missionary candidly admitted, "Since I could not give them medicine for every disease, the women got angry and believed that I would not give them advice."

The Delhi mission also realised that much more could be accomplished, both medically and evangelically, by removing patients from their homes for dispensary and hospital care. The Indian home environment did not provide the ideal setting for the missionary to apply the dual care that touched both the body and soul. In the mission's view, the air of dirt and disorder within Indian homes compromised the quality of treatment. Besides it also meant non-compliance of the "doctor's" directions since there was persistent meddling by family members and indigenous healers. In 1885, the St Stephens Hospital, the first hospital for women and children of Delhi, was opened. The hospital, with its thorough order hygiene and discipline, was perceived as education for women: it was designed to reveal a treasure trove of ideas to patients to take back to their domestic worlds. Inside, it patients were encouraged to read from the scriptures and arrangements were designed to ensure the fair administration of the gospel before actual treatment.

The first qualified doctor, Jenny Muller, however, joined St Stephens only in 1891. And in 1906, foundations for a bigger premise were laid at Tis Hazari -- the present site of the hospital. Lefroy thought this would put the Delhi Medical Mission on a firm footing. But not everyone was as confident. Muller in fact was quite apprehensive that the paucity of trained personnel might prevent the hospital form doing justice to its objectives. She noted, "I am sure we are wasting the money so generously donated."

The Lahore Diocese -- of which the Delhi Mission was a part -- was alive to these concerns. At the 1893 Conference of Women Medical Missionaries it was decided that a medical school for women, attached to a women's hospital, was needed in India. The North India School of Medicine for Christian Women opened in the following year, with four staff and four students. St Stephens Hospital also started a training School for nurses under Alice Wilkinson -- the first trained British nurse who joined the hospital in 1908. Wilkinson became the hospital's nursing superintendent and is credited with raising the standard of nursing not only in St Stephen's but in rest of India as well. She founded the Trained Nurse's Association of India and worked as its secretary until 1948. In 1913, the first qualified surgeon, Helen Franklin, joined the hospital.

Of course, in order to persuade the Indian patients to accept in-patient treatment, the missionaries had to make a number of concessions: the cook in the hospital was always a Brahmin. They had to also tolerate the entourage of relatives whom, given a choice, they would have banished from their wards. All this along with professionalisation led to greater acceptance for missionary medical work. In the past, patients had often consulted missionaries after exhausting all avenues of indigenous treatment. By the second decade of the twentieth century they were able to report that a large proportion of their patients were willing to consult them at a less desperate stage of illness.