Dioxins, which are by-products of industrial processes, are not volatile and are extremely persistent chemicals. They bioaccumulate up the food chain easily as they dissolve readily in oils, fats and non-polar solvents. Dioxins are among the deadliest chemicals known to humans. Yet its murky politics tries to downplay the health threat 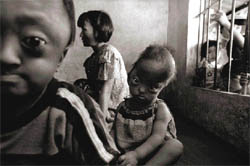 These are victims of an ill-fated war fought 30 years back. The war is over but its toxic backlash lingers. One weapon of the war is still wreaking havoc -- Agent Orange, a herbicide containing tetrachlorodibenzo-p-dioxin (tcdd). From 1962 to 1971, the us military aerially sprayed 42 million litres of Agent Orange to deny the communist fighters forest cover. And the nine-year-exercise undertaken then is throwing up its ominous aftermath now. The war has left an ugly heritage for the future of the people of the southern cities of Vietnam, Bien Hoa being a hotspot. The dioxin in the herbicide has seeped into the soil and accumulated in the waterbodies finding its way into the bodies of the residents through their food.

This happened 30 years ago. But last month, an unusual meeting on Agent Orange took place in Hanoi where the us-Vietnamese government scientists met and mutually agreed on a pilot study on screening soil and sediments for dioxins. The us has long tried to sidestep the Agent Orange controversy and even intimated Vietnam in 1978 that if the issue is ever raised, it would have to face economic repurcussions. In fact in 1990, a us Congressional report even found that the Agent Orange study was deliberately blocked by the Ronald Reagan administration. However, the Vietnam veteran groups in the us continued to keep the issue alive.

The recent Hanoi meeting is significant against the backdrop of two path-breaking studies. One, the study by the us Institute of Medicine (iom) which proves that dioxin triggers acute myelogenous leukaemia in Vietnamese children. The other by Arnold Schecter of the University of Texas, who carried out tests on blood samples collected from the people living in Bien Hoa in 1999 and 2000, which reveals that 24 out of 25 village residents had elevated levels of dioxins in blood.

The meeting pleased many. But not Schecter. He points out, " The scientists should screen the blood and food samples rather than merely screening soil and sediments." He adds, "But they are not keen to do so because such a screening would affect both Vietnam and the us. Obviously any evidence of food contamination would hit the seafood and meat exports of Vietnam. For the us, such a proof would mean paying compensation to those who are proven exposed to dioxins and cleaning up the contaminated sites." The war goes on.