So much for scope and research scale 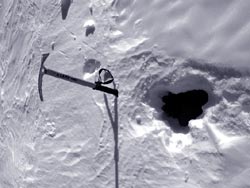 A 1996 expert group report on the Indian Antarctic programme says: "The programme has so far been working in complete isolation with no substantial element of international cooperation. While actual attempts are being made by various countries through the aegis of SCAR (Scientific Committee on Antarctic Research) to join hands in experiments that need prolific logistic support, India is not represented in any of these international endeavours."

The report also notes that "the participating institutions are sponsoring very junior scientists for the Antarctic expeditions. There are instances where technical assistants and research fellows with inept experience and background are deputed to Antarctica, as a consequence of which the quality of the work in the field suffers. The committee, therefore, feels that senior scientists who are directly involved in Antarctic research should find time to lead their teams to Antarctica so as to provide proper guidance and direction to the research teams working under them."

While this report's observations and recommendations do carry an element of sanity with them, an evaluation of the Antarctic programme by the New Delhi-based National Council of Applied Economic Research (NCAER) in 2002-03 epitomises the skewed logic that seems to be characteristic of the Indian presence in Antarctica.

The evaluation points out: "At present, there is an urgent need for consolidation of the work done in different spheres and reaching a certain level of research accomplishment comparable to international standards. In order to achieve this, the scientific data has to be collected on long-term basis. Hence DOD should insist for the commitment of participating institutions for long-term projects."

So far, so good. But the NCAER evaluation goes on to say that "the functional approach is the predominant organisational structure". In other words, bureaucracy runs the programme. It then blatantly argues for non-original research. Approvingly, it says: "There is a commonality in scientific areas of research undertaken in various countries' programmes. This would discount the hypothesis of critics arguing that the 'imitative research' is a drain on country's valuable resources." The idea of international cooperative research floated here is obviously a bogey. "It is unlikely that the Indian government would adopt the consortium approach as this would require a totally different administrative structure to the one which is prevalent at the moment."

Like the science, the evaluation of its achievements runs up against the same monolith. But this is not all. Although India has been admitted to both the Antarctic Treaty System and the SCAR in 1983 and 1984 respectively, it has made very little original and intellectual contribution at the meetings of these international bodies. This is because successive governments have chosen to completely neglect the issue of Indian representation at these events: while other nations have sent delegations of specialists, Indian presence has mostly ridden on a single member-team, which is hardly able to present the country's position forcefully. Also, in most cases, this assignment has been entrusted to career bureaucrats, who are usually clueless about Indian scientific work in Antarctica. Naturally, our researches in the continent have had very little global impact.

Finances are also an issue. Allocation for Antarctic research has remained more or less static since the first expedition in 1981. In terms of activities and new experiments, there has not been any substantive scaling-up of research in the continent. Even the discussions on setting up of a second research station, a location for which is yet to be finalised, have been initiated only recently. Clearly then, there is absolutely no plan. The government does not know what it wants its scientists to do; it probably doesn't wish them to do anything at all. Even evaluative reports meant to break the impasse do not provide focus and vision, becoming a duller version of the same dullness that informs the Antarctic initiative.

Concurs noted space scientist U R Rao, who was the chairperson of the expert group that prepared a 10-year work profile for the Indian Antarctic programme in 1996: "There is a need for sharpening our research focus." Says another scientist associated with the Antarctic programme from its early years, "We wanted to be there. So we went there for the first time in 1981. Since then, we have been going there every year -- more like a ritual." A ritual now perfected to an art.