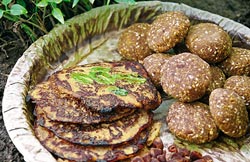 the deciduous plant mahua is one of the most important flora species of Orissa. It is also found in Jharkhand, Chattisgarh, Maharashtra, Madhya Pradesh, Bihar and Uttar Pradesh. Its flowers are valued across the country for brewing a local liquor, which is called mahuli in Oriya. Its fruits are eaten raw and the seed kernels are crushed to expel edible oil. The plant wood is the most preferred for firewood amongst women as it burns without emitting much of the choking smoke.

Madhuca indica -- the botanical name of mahua -- flowers during the end of February or early April every year. The matured flowers are dried and sold at Rs 2.50 to Rs 5 per kilogramme, depending on the time and quantity of production.

As per a report of the Mysore-based Indian Institute of Nutrition Sciences, mahua is a nutritious food for humans as well as the cattle. It is rich in phosphorus, iron and calcium. Mahua flowers are very sweet and hence mouth-watering.

In the past, mahua was the staple food of many indigenous communities of Orissa. But because of "faulty" government policies, this is no longer the case -- the state's excise act restricts its storage in homes. A licence is required for this purpose. As a result, many people have been forced to forgo their staple food. Soon after collection, they now sell the flowers to the licensed agents of liquor breweries.

Nirmalendu Jyotishi is a programme manager with the Regional Centre for Development Cooperation, an Orissa-based non-governmental organisation