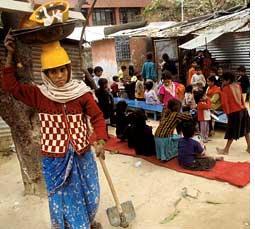 Lakshmi, 22-year-old construction worker from Chhattisgarh, gave birth to the youngest of her three children in December 2008 through caesarian section. She had to resume work within five days to pay off the loan she took to meet her medical expenses. In normal circumstances she would have taken her infant son to the construction site and left him in the care of his older siblings aged five and three. But her children were spared spending long hours in the harsh cold while she and her husband worked at the construction site in Sector 44, Noida. A crche gave her the social support she needed.

The construction boom in Delhi and its neighbouring region offered Lakshmi and her husband work opportunity. Mobile Creche, a Delhi based non-profit that runs 22 creches at construction sites in and around Delhi, takes care of their three children while they work."Now I am able to leave my children in a safe place," Lakshmi said while nursing her baby during a morning break. The creche has cloth slings in which newborn babies sleep. There are two women attendants and a helper to take care of them. The adjacent tin sheds are classrooms where Lakshmi's older children and others aged up to 12 are taught to read and write by two trained teachers. The classroom walls are papered with charts of the alphabet, drawings and a list of names of children with their health status.

Classes begin at nine in the morning. Attending classes ensures children of construction workers get nutritious food and are not exposed to hazardous conditions at work sites. At 10 am they are given breakfast, usually semolina or suji halwa. Nursing mothers also walk in at the same time to feed their babies. In the afternoon the children are given khichdi (kedgeree) . Biscuits and bananas are served late afternoon. Malnourished infants and children are given lactogen and extra nutrition. A doctor visits the creche once a week.

Lakshmi is luckier than the majority of the estimated 10.36 million women working in the unorganized sector in urban India. The Building and Other Construction Workers (Regulation of Employment and Conditions of Service) Act, 1996, stipulates a company should provide a creche if it employs more than 50 women. Most construction firms do not follow this rule. "The poor working woman has no place to breastfeed her child," said Arun Gupta, national convenor of the non-profit Breast Feeding Network of India. "The nourishment gained in the first year of a child's life is critical in determining his/her future health," he added.

The Planning Commission too recognizes maternity benefits and creches as an integral part of the strategy to improve infant feeding and nutrition. "But most of the government proposed maternity benefits reach only its employees and 95 per cent women in India work in the unorganized sector," said Vandana Prasad, national convenor of the non-profit Public Health Resource Network. She said the construction workers are the most deprived section. "Their migrant status affects their claims and awareness of maternity benefits," Prasad said.

JMC Constructions, the firm building the New Maharashtra Sadan at Kasturba Gandhi Marg in the heart of Delhi, is one of the few that provides a creche at work site. "This way we are able to hire both the man and his wife and retain them for longer periods. The children are also kept out of harm's way," said Amit Rathi, an administrator overseeing the construction work.

Mridula Bajaj, director of Mobile Creches, said 20 to 30 per cent of the cost of maintaining creches come from the developers. "We prefer to persuade developers to set up creches instead of prosecuting them for not following the law," Bajaj said. She said that it was a strategic decision to involve the developers and the workers in a common dialogue.

"Targeting the children through creches solves the twin problem of child abuse and child labour. If there are enough creches for all children, their subsequent entry and retention in schools would also be easier," said Bajaj.

In the past forty years, 7,00,000 children have benefited from the creches and non-formal schools run by Mobile Creches though very few of them graduated to regular schools.

Kanta Negi, 35-year-old balwadi teacher, working with the non-profit said she expects only 15 per cent of her class to make it to regular schools. But the time these children spend under the care of the organization, however brief, does help change behaviour. Samast Khan, a construction worker from Jhansi, working in Noida, said his children insist on a bath every single day. "I heat water over fire lit with wooden shavings salvaged from the construction site to give them their daily bath," said Khan.

The children improve their communication skills too at bal sabhas held every Saturday afternoon. They are given a topic to debate. One of them acts as a student facilitator who goes around asking others to stand and speak. At one such session three-year-old Kalpana was asked to speak on how she kept warm in winters. "To keep warm in winters, we could wear a shawl, a sweater, a jersey and muffler," the little girl said. As an afterthought she added, "And we must not forget to wear an underwear." Everyone laughed and Kalpana's point hit home. Most children in these classes come from homes where undergarments are a luxury.

"Our aim is to provide a safe place for the child of the construction worker. We hope one day, these children too get access to the same education as the privileged," Bajaj said.